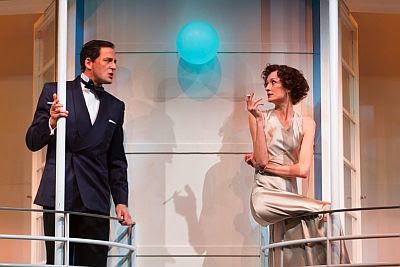 
What do you do with a comedy of manners when manners have changed so drastically? It’s been over eight decades since Noel Coward’s “Private Lives” opened in , with Coward, Gertrude Lawrence, Adrianne Allen and Laurence Olivier in the lead roles. Much has changed since then: morals and mores, relationship between the sexes, the very nature of what it means to be sophisticated and the fact that the closet door has been kicked open. The answer to the question? Well, in the case of the current production at Hartford Stage, you do the best you can and hope that the audience won’t see the seams of this elegant period piece have frayed and its colors faded.

As directed by Darko Tresnjak, the Stage’s artistic director, there’s still a certain life to the piece, but it’s a flicker not a flame. The premise is simple: Elyot Chase (Ken Barnett) was once married to Amanda (Rachel Pickup). They divorced, and now he has just married Sybil (Jenni Barber) and Amanda has just married Victor (Henry Clarke). The two new couples have, unbeknownst to each other, both chosen to celebrate their honeymoons at the same hotel in . In fact, their two terraces abut. There are matching scenes early on filled with exposition and then the eventual meeting of Elyot and Amanda. After a bit of tentative jousting and some shared cocktails and cigarettes, the two realize that they are still madly in love and, well, elope to Amanda’s flat in , where they pick up their old ways, which essentially means lovers’ quarrels leading to moments of passion leading to fisticuffs and a gun battle. Such is the way of true love. They are tracked down by Victor and Sybil, who have realized they are a matched pair – proof of which comes in the final scene of the play when they verbally go at each other tooth and claw only to tumble into passion. 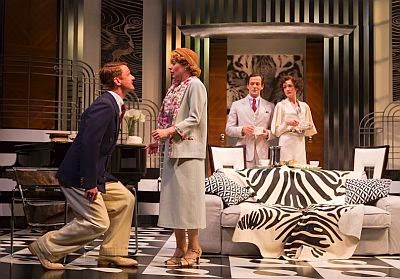 The audience the night I saw the play was willing to go along with the set-up, but as the evening wore on (the production runs for 90 minutes or so without an intermission) I sensed a withdrawal (perhaps it was only my own reaction), for the interaction on the stage, albeit with a period-perfect stage design by Alexander Dodge and elegant costumes by Joshua Pearson, became more and more distant. It simply became very difficult to buy into what was going on or to accept that this slightly misogynistic take on marriage was in any way funny.

Coward wrote the role of Elyot for himself, and Barnett gives us a nice take on the Coward style, which includes being more than just a tad bitchy. In this rendering, that Pickup as Amanda, so svelte and elegant, has ever found Elyot, a quintessential boy-man, attractive is difficult to swallow, as is the fact that Elyot has chosen to marry the simpering Sybil, or that Amanda has opted for Victor, played by Clarke as something of a Monty Python caricature of a British twit. Perhaps these characters, 80 years ago, seemed alive and engaging, but time has thinned them down to cardboard, save for Amanda, for Pickup shows us how Katherine Hepburn might have played the role (her cross from one terrace to another is elegance personified).

As for the dialogue, well, it relies more or less on the premise that anything said with a British accent (forced or otherwise) is, by definition, witty. Actually, some of the banter is semi-intelligible, as the actors bite off their words or, at times, substitute mumble and grumble for enunciation. And then there are the dramatic gestures that, often, seem to be a throw-back to the over-the-top visual evocations of emotions familiar to silent movie aficionados.

Hartford Stage’s production of “Private Lives” raises the question of the relevance of temporality as regards theater. Why do we still respond to Antigone’s confrontation with Creon or Romeo’s tragic love for Juliet? Perhaps because Sophocles and Shakespeare wrote not for the moment but for eternity, dealt with that which makes us human rather than that which makes us merely creatures of our times. Sybil, Elyot, Victor and Amanda, as created by Coward, are like models we might see in a decades-old Vogue, dressed in period garb, striking affected poses, offering up the ephemeral lifestyle of a world that no longer exists. We can still learn something from Antigone’s battle with Creon and Romeo’s love for Juliet – we can learn nothing from the two couples in “Private Lives.” Ah, you might be saying, but it’s just a comedy. We’re not supposed to learn anything from comedies. Really?