“Proof” Doesn’t Add Up…or Does It? 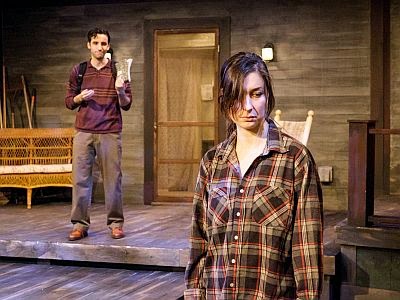 Marty Scanlon and Dana Brooke. All photos by Rich Wagner


So how do you find fault with a play that in 2001 won both the Pulitzer and Tony awards for Best Play? Perhaps by saying that what we have in David Auburn’s engaging work now on the boards at Playhouse on Park is a series of character studies linked by multiple conflicts that are less resolved than allowed to drift away. Thus, although the current production is often vibrant and certainly entertaining, it suffers only in the fact that you come away saying, “And so?” Or, perhaps, that’s the point.

Made into a film in 2005 starring Gwyneth Paltrow and Anthony Hopkins, “Proof” centers on Catherine (Dana Brooke), a woman in her early 20s who left college to take care of her father, Robert (Damian Buzzerio), a brilliant mathematician now suffering from dementia. Catherine has inherited her father’s skill in and love of numbers, yet she has apparently opted not to pursue her talent, instead becoming a somewhat disgruntled caretaker. The play opens the week after Robert’s death, but Catherine envisions him, and they have a conversation, which suggests that Catherine may have inherited more from her father than just a love of math. As an aside, there’s a problem (or a clue) in this first scene that involves a bottle of ersatz champagne as a birthday gift – if it’s a figment of Catherine’s imagination then how does it later materialize in real time, and if it is not, then who has supplied the champagne? Robert’s ghost or Catherine? If Catherine, then…?

Catherine’s sister, Claire (Melissa Macleod Herion), arrives for the funeral. A take-charge woman, Claire suspects that Catherine may be showing early signs of the dementia their father suffered from, a suspicion Catherine bridles at, especially when Claire suggests that one of Robert’s former students, Hal (Marty Scanlon), who Catherine says has been at the house researching Robert’s work, is a fiction.

Themes abound: the responsibility of the young to care for their elders; the role (or lack of same) of women in the discipline of mathematics; the relationship of trust and proof (used in multiple senses – that of a mathematical proof and proof of the truth); the publish-or-perish climate of Academe; insanity as a concomitant of genius. All of these themes are interwoven into the play’s conflicts: Catherine and Claire as siblings with different views on responsibility towards a parent, Catherine and Hal dealing with the academic, mathematical and emotional meanings of proof, and Robert dealing with the agony of what happens when “the machinery” will no longer function, when a mind that once soared is now mired in confusion. 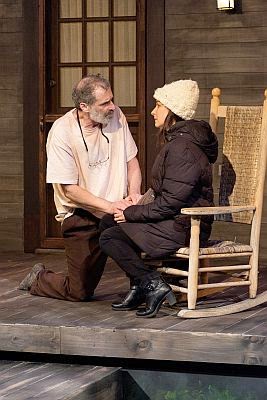 Such interweaving allows for scenes, deftly directed by Dawn Loveland, that are, in and of themselves, quite riveting. To name just a few: Robert’s dawning awareness that he is slipping back into dementia as Catherine reads to him from his notebooks – Buzzerio grippingly creates the picture of a man trembling again on the brink of insanity who, in a clear moment, sees the abyss into which he is about to descend. It is harrowing, made more so by Brooke’s controlled reaction: a mere tremble in the voice and a flicker of the eyes conveys her inner agony. It’s great theater. So, to, is the confrontation that ends the first act, with an appropriate reveal that makes the audience want to rush back to see what happens.

There are several confrontations between the sisters that evoke more than the specifics of their arguments, and Herion and Brooke perform intriguing, sibling “dances” as they take on the various roles that have defined their characters’ relationships throughout their lives. As Hal, Scanlon has perhaps the most difficult (and pivotal) task, for he is perpetually the odd man out, distanced from the familial histories and conflicts that suffuse the play.  He is appropriately intense, yet there seems to be a lack of ardor in his performance such that his protestations of concern for Catherine ring hollow. Perhaps that’s the point, yet if it is, then the play’s final scene is darker than as written and presented. If so, then “Proof” becomes a familial tragedy on the order of Oneill’s “Long Day’s Journey into Night.” As Catherine begins to explain her “proof” to Hal, is she taking a tentative step towards freedom or stumbling onto a path that will lead to her ultimate destruction? A slight shift, either way, in how Scanlon plays, or has been directed to play, his role, might suggest an answer.

There is no denying the power of “Proof,” mainly because its multiple, well-written scenes are an actor’s dream, and this team of talented actors takes full advantage of what Auburn has given them. And yet, one comes away less than totally satisfied, though not through any fault of the actors. The dissatisfaction stems from lurking questions: what have we just seen and what does it mean? Perhaps there is a streak of philistinism in me, but am I asking too much to have a play decide what it is emotionally and intellectually trying to say? The “You decide” answer doesn’t sit well, but that’s what we’re left with. Then again, in the words of playwright David Mamet: “The theater exists to present a contest between good and evil. In both comedy and tragedy, good wins. In drama, it’s a tie.”