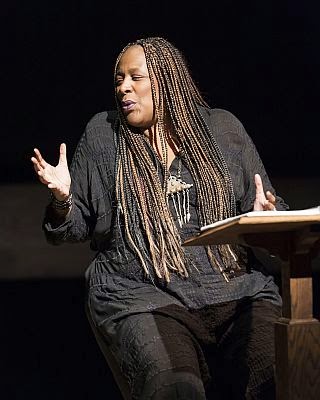 
As we make friends and perhaps become intimate with some of them, they eventually want to know “who we are.” That is, they want to hear our stories, what happened before they met us that made us who we are right now…and we tell them. We attempt to recreate those moments from our past we believe were defining, that molded us, perhaps, at times, twisted us, into the walking, talking breathing portraits that we present to them…but, do we ever get it right? Are the stories we tell the truth or mere simulacrums? As they listen to the verbal portraits we paint, do they sense the pentimenti that we perhaps cannot?

Pentimento, from “pentire” – to repent – from the Latin -- “penitere” – kissing cousin of “penance” and “penitence.” All of the words are appropriate when thinking about “Forever,” which is enjoying its world premiere at Long Wharf Theatre. This journey back in time, a one-woman show written and performed by the talented Dael Orlandersmith, is an exercise in how we deal with the past, how we run away from it only to find that we cannot escape, that it is within us, a part of us, yet that it is also protean, for the past we thought was true when we first broke free from the familial ties or, in some cases, chains we believed bound us is palpably different from the past we understand and eventually embrace as we mature.

On a platform stage bare save for two chairs and a kitchen table upon which rests a candle, a record player, some LPs and a small stack of books, Orlandersmith tells her story, which initially has the feel of a classic screed -- an adult looking back and complaining about how she was so misunderstood and mistreated as a child – but Orlandersmith is better and smarter than that, and she has more to say about the often skewed relationship between parents and children: the clash of needs, desires, dreams and fears.

There is occasional laughter from the audience, but for the most part those in attendance create a rapt silence that is tangible as Orlandersmith weaves a tapestry of a mother-daughter conflict that can only begin to be understood in retrospect. Orlandersmith draws the audience in as intimates as she remembers her mother, initially presented as a cigarette-smoking, Scotch-drinking harridan, and also remembers the authors, artists, and singers who spoke to her as she was growing up – the dark and the light of her childhood, initially offered as thesis and antithesis, but eventually there is synthesis, a mature understanding of who her mother was and how much that is vital and essential in her is her inheritance.

Once Orlandersmith has captured her audience, she uses the classic dramatic form of rising action, climax and denouement that leads to a catharsis of sorts. Central to the play’s movement is an extended description of a rape that occurred when Orlandersmith was a young girl and her mother’s slow descent into death, culminating in Orlandersmith viewing her mother’s body in a hospital morgue – both scenes emotionally riveting on multiple levels. And then we are brought back to where we began, the Pere Lachaise cemetery in Paris, where so many luminaries are buried, and where Orlandersmith, standing at Jim Morrison’s grave, begins to understand that the past and the present commingle, and that who she is – her dreams, her delights, her passions – are part of her inheritance from a young girl with a 19-inch waist, a dancer who quoted poetry and sat on a porch in a humid South Carolina night and…dreamed.

Riveting and emotionally satisfying, often poetic, “Forever” asks us to consider what we think we know about the past and acknowledge that it takes time to “get it right,” if we ever can, for the more we learn about the past the more we sense we do not and can never know.