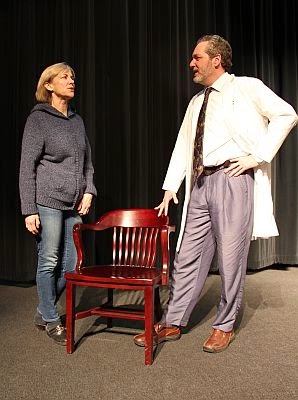 It takes a while for any play to get off the ground, for lift to develop beneath the wings of necessary exposition, but in the case of David Linday-Abaire’s “Good People” (nominated for two Tony Awards in 2011), which recently opened at Square One Theatre Company in Stratford, the runway is very long – in fact it stretches almost the entire length of the first act of this two-act play directed by Square One’s creative director, Tom Holehan. It’s not that the dialogue isn’t engaging or the characters well-limned, it’s just that there just doesn’t seem to be any compelling reason to care about these characters and scant conflict evident in the play’s first 55 minutes. As the lights go down on the first act one might consider tuning out, but don’t, for there’s a second act, lift is finally achieved and the play, if it doesn’t exactly soar, reaches a decent height.

Set in South Boston (Southie) and the ritzy suburb of Chestnut Hill, the play focuses on Margaret -- Margie -- (the ebullient, intense, always engaging Janet Rathert) as a woman who has lived on the brink since she was a teenager, now a single mom with a mentally deficient daughter. Margie is a survivor in a ceaselessly turbulent sea (much of the turbulence of her own making) who never escaped Southie (both physically and psychologically) and who exists from one paycheck to the next. In the opening scene her paycheck, earned at a Dollar Store, is once again in jeopardy, for her boss, Stevie (Darius James Copland) is taking her to task for once again being late for work (the need to care for her daughter the cause of the tardiness). He’s compelled by management to fire her, which sets her off on a quest to find another job to survive. 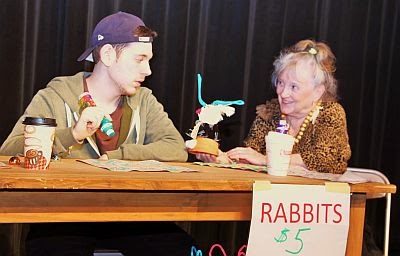 There’s always bingo as a diversion, and a source of some quick cash, and it’s in the basement of a Catholic church that we meet Margie’s friends, her landlord, Dottie (Alice McMahon), and Jean (Danielle Sultini)…and, again, Stevie, who, it is rumored, is gay because be likes to play bingo. The badinage amongst the characters is engaging, but it’s not obvious where all of this is going, nor is anything made clearer when Maggie essentially forces her way into Mike’s office, Mike (Brian Michael Riley) being a successful doctor who once, as a Southie teenager, dated Maggie for several months. She’s looking for a job, but she’s also as bristly as a hedgehog, taunting that with his success Mike has become “lace curtain” – a phrase meaning that he’s risen above his allotted station in life (the Kennedy’s were considered lace curtain). She doesn’t get a job, but she does coerce Mike into inviting her to his birthday party, where she may make some contacts that might lead to employment. However, Mike calls to tell Margie that his daughter is sick and the party has been cancelled.

That’s about it for the first act. Not much on which to hang a dramatic hat. But there’s more here than meets the eye, for the second act opens with Margie appearing at Mike’s house, even though she knows the party is off – she suspects he’s told her this because he really doesn’t want her to attend. What follows, as Margie meets Mike’s wife, Katie (Jessica Myers), a black woman, and interacts with Mike, is an unraveling, a shriving and a dissection of relationships hinted at in the first act that ultimately define what a “good” person is, and the nature of that “goodness.” This extended scene, which takes up most of the second act, is well worth the wait. 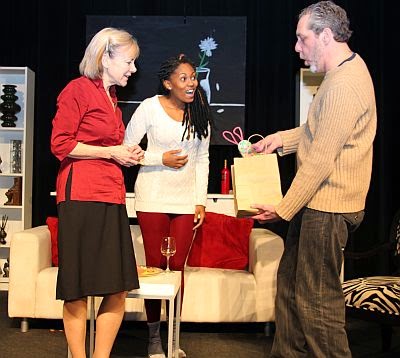 This is, without a doubt, Margie’s play, and Rathert, as she has done in prior Square One productions (most recently in “Time Stands Still”) shines. She’s on stage for the entire play, and her take on a woman beset by circumstances essentially beyond her control is riveting – even in the first act, when not much is happening, Rathert’s character exudes a diffuse, self-destructive energy that is compelling, and she has obviously given much thought to her character’s interior life, for, at the beginning of the second act, she nervously scratches at her legs, giving a physical indication of the tension and indecision that bedevils her as she confronts Mike: she knows what she is about to attempt but…she doesn’t want to do it.

Riley is more than up to the task of playing off Rathert’s Margie. He gives as good as he gets in the second act’s extended scene as a man who has painted his past as more troubled than it really was – a Southie tough wannabe -- and uneasy about what, and whom, he sacrificed to get to where he is today, and McMahom and Sultini, as Margie’s friends, though given cardboard character roles, make the most of them. The only questionable note in the production is Myers’ take on Mike’s wife. She comes across more as his live-in girlfriend than as a wife who has had to deal with and accept his idiosyncrasies and peccadilloes, and many of her lines are lost because, even in the relatively small confines of the Square One Theatre, it is often difficult to hear what she is saying. A little more projection might be in order.

“Good People,” as written by Lindsay-Abaire, is uneven, but there’s enough in the dynamic second act to make attendance a worthwhile proposition. Margie seems to just want another job, but she wants so much more, including affirmation, and as the second act unfolds you realize that, as flawed and conniving as Margie is, she really is a good person, and that this goodness, as captured in the defining act of her life and then reconfirmed as she answers Kate’s final question, warrants reward…of which there is just a hint at the curtain.