"Chalk Circle" an Exercise in Theory 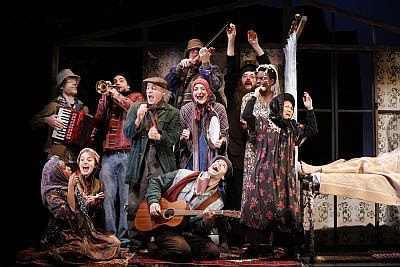 The cast of 'Caucasian Chalk Circle.'
All photos by Carol Rosegg

Bertolt Brecht’s “The Caucasian Chalk Circle” is as much an exercise in dramatic theory as it is a drama – or a parable. As currently staged by the Yale Repertory Theatre under the direction of Liz Diamond, it has its moments, but as you sit and watch the events unfold you can’t help but feel you are auditing some graduate seminar. You are an observer, and that was Brecht’s intention, for in his theory of “epic theatre,” the audience was to be kept at a distance, essentially alienated, never allowed to develop empathy for the characters. No entering into the world of the play here, no attempt at creating the illusion of reality. If that’s your cup of tea, then the Rep’s production -- stylish, visually arresting and well-acted -- is just for you. However, if you are seeking to be moved, to be emotionally swept away after almost three hours of theater, well… 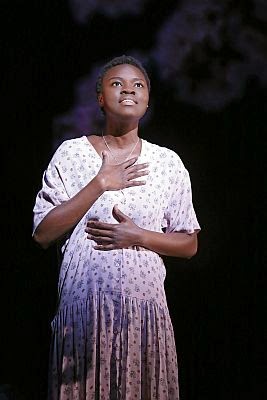 That being said, the lead actress, Shaunette Renee Wilson (a second-year MFA candidate at Yale School of Drama), playing the role of Grusha, a peasant girl, often makes you forget theory, for she draws you in and makes you care about her character’s plight. Doing so, she stands apart from many of the other actors who, more often than not, seem to be pontificating or posing, conforming to Brecht’s theory of acting, which he called “gestus” – (he was at odds with Konstantin Stanislavsky’s “system” that, among other things, demanded that actors “experience the part” while acting). Brecht called for his actors to embody an attitude in order to reveal social relations and motivations for behavior, all wrapped up in an historical materialist perspective. 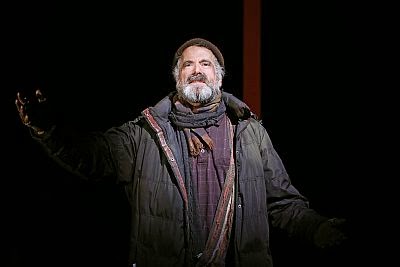 The play’s plot, developed in a series of sketches (Brecht believed that each element of a play should be treated independently) is set in the fictional country of Grusnia, where there is a gathering storm of political upheaval. The scene is set by “The Singer” (Steven Skybell, who also plays Azdak) – an omniscient narrator who not only comments on the play’s actions but enters the minds of some of its characters and speaks their thoughts in voice and song (to a haunting score by David Lang). Brecht’s concerns are with politics, the nature of power, and the ability of human nature to both sink to depths of depravity and rise to moments of compassion and tenderness. Hence, in the troubled there is soon a coup d’etat, The Governor (Max Gordon Moore) is deposed and beheaded and his wife, Natella (Brenda Meaney) escapes, leaving her baby, Michael, behind. It is this babe that Grusha comes upon and, against her better judgment, decides to protect. Her decision, which wars against her love for Simon (Jonathan Majors), a soldier, sets in motion a series of events that include a perilous trek, a forced marriage and a trial with Solomonic overtones. 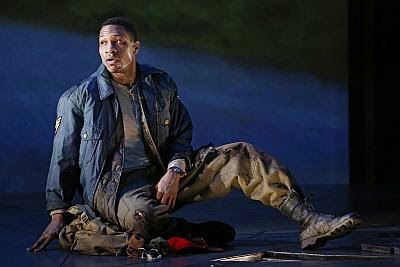 Brecht obviously had things to say when writing his play, and the saying of them makes the evening a bit didactic. Whether it’s the nature of oppression, the arbitrariness of those in power, or the compassionate nature of the good, honest folk (or the venality of said “good, honest folks”), the play wears its ideas on its somewhat Marxist sleeve. Thus, going back to the grad seminar idea, you might often feel while viewing the play that you are being taught rather than entertained. Again, if that’s your cup of tea…

However, no fault can be found in the staging of “The Caucasian Chalk Garden.” Scenic designer Chika Shimizu’s sets are disturbing and fraught with images of disruption and psychological terror, matched by Stephen Strawbridge’s riveting lighting design and the often shattering impact of Matt Tierney’s sound design. Visually, “Chalk Circle” is stunning. Music, lighting and set all work to convey the idea that titanic events are occurring – would that the script conveyed the same idea. Rather, what we have is, by and large, a polemic, with the characters often delivering the playwright’s ideas. Observing what is going on up on the stage, one is less compelled to sit back and be engrossed than to take notes.

“The Caucasian Chalk Circle” runs through April 11. For tickets or more information call 203-432-1234 or go to www.yalerep.org
Posted by Geary Danihy at 6:46 AM