'Playing the Assassin" -- TheaterWorks -- Thru April 26 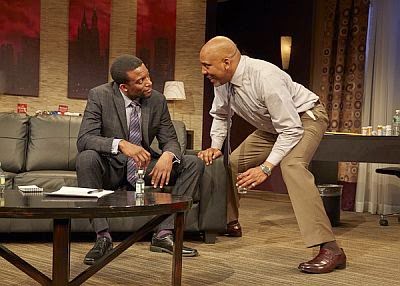 
Baseball may be “America’s game,” but there’s no denying that it’s football – especially the National Football League’s version – that stirs the male loins and drives fans year after year to stadiums, sports bars and in-house parties to watch large, well-conditioned men beat the crap out of each other while scoring touchdowns. The organized mayhem has been compared to that of the Roman games in the Circus Maximus, and for good reason, for although there are no rampaging lions and tigers and gladiators aren’t skewered, the NFL offers its fans a controlled violence that satisfies very basic urges…but, at what cost to the players?

That’s the premise of “Playing the Assassin,” an immensely powerful, moving drama by David Robson that recently opened at TheaterWorks in . Directed by Joe Brancato, this look into the life of an ex-NFL star, dubbed “The Assassin” for his vicious hits and brutal style of play, is theater at its very best. 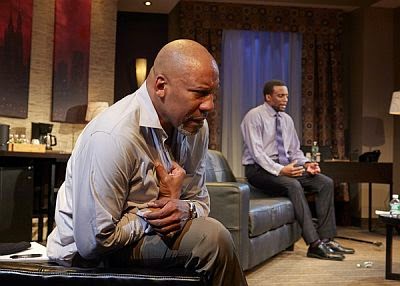 As noted in the program, Robson got the idea for the play after reading the obituary of NFL safety Jack Tatum, a hard-hitting player for the Oakland Raiders who, during a pre-season game, laid a devastating hit on New England Patriots’ wide receiver Daryl Stingley, permanently paralyzing him. It was the obituary’s headline – “Jack Tatum, Whose Tackle Paralyzed Player, Dies at 61” – that struck Robson. Here was a man, Jack Tatum, who had had an illustrious career in the NFL, but in death, as in life, he was forever shadowed and burdened by that one play.

And so we have Frank (Ezra Knight), “The Assassin,” now suffering from numerous ills, ailments and aches and pains years after he retired from the game, down on his luck, being offered the opportunity by CBS to appear on a Super Bowl pre-game show along with the man he hit and paralyzed. The offer is being made by a young man named Lewis (Garrett Lee Hendricks), who produces interview spots for the network’s sports shows. Contract in hand, Lewis enters Frank’s hotel room (meticulously created by set designer Brian Prather) for a pre-show background interview. What follows is not only a series of emotionally jolting revelations but a dissection of the game of football, its inherent violence and hypocrisy, the toll it takes on the men who subscribe to the ethics and cult of the gridiron hero, and the indistinct line between aggressive play and gladiatorial violence.

Enough can’t be said of Knight’s performance as the over-the-hill “Assassin.” Initially he gives us a man secure in his image and sense of self, but as the play progresses he is forced to confront the macho image he has lived by, an image he was forced to create if he was going to survive and thrive in the game. It’s an eye-opening, hold-your-breath performance complete with subtle gestures and overt aggression. There was probably no one in the audience on opening night who didn’t believe they were watching and hearing a man who had played the game and was now being forced to confront the toll it had taken on his life and his humanity. 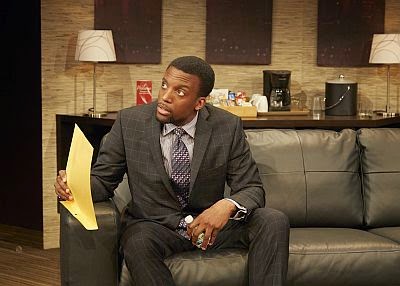 The catalyst for this self-analysis is Lewis, who is not whom he claims to be. To explain further would lead into spoiler territory. Suffice it to say that Lewis has more on his mind than a simple pre-game interview, and the stakes are much higher than getting Frank to sign the contract. Henrdricks more than holds his own on a stage that can’t help but be dominated by Frank’s character. Initially reserved and business-like, as the true nature of his character is revealed Hendricks grows stronger and stronger.

The play’s underlying theme is the violence that lurks beneath the veneer of civilized man, and the suggestion that we are all capable of striking out if driven by creed, credo, lust or thirst for revenge. Thus, Frank and Lewis are first seen in business suits, the garb that hides the caveman beneath, but by the end of the play jackets have been tossed aside, ties are askew, shirts are unbuttoned and hang loose. We are into primal confrontation, the animal fighting for its psychic survival. To say that the play’s final minutes are riveting would be an understatement – the silence and rapt attention of the audience was palpable.

If there is one false note in this production it is the decision by lighting director Ed McCarthy (if it was, in fact, his decision) to highlight with blood-red lighting two scenes that illustrate the play’s main theme of latent violence. It’s gilding the lily and calls attention to itself. Supportable, perhaps, with its first usage (which involves slow-motion movement), its second appearance lessens rather than heightens the brutal confrontation that is occurring, placing the action in an “otherworld” when, in fact, it should be an in-your-face moment – stark, real and harsh. The lighting decision suggests that at this moment the creative team didn’t trust the audience would “get the point.” Oh ye of little faith in your audience.

Lighting missteps aside, “Playing the Assassin” is theater that satisfies on multiple levels. It’s visceral, intelligent and superbly acted. One can’t ask for much more than that.

“Playing the Assassin” runs through April 26. For tickets or more information call 860-527-7838 or go to www.theaterworkshartford.org
Posted by Geary Danihy at 6:12 AM