Snippets of a Life

"Stand By Your Man" -- The Ivoryton Playhouse -- Through April 5 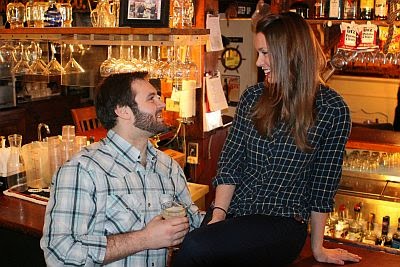 
The Ivoryton Playhouse has gone more than a little bit country with its first production of the 2015 season, “Stand By Your Man: The Tammy Wynette Story,” directed by Sherry Lutken, with a book by Mark St. Germain. Whether it’s truly a “story” remains to be seen, but it certainly showcases the songs Wynette made famous. The problem here is, if you’re not into the twang and semi-wail of country music (and the often maudlin lyrics), you may have a problem warming up to this production. That, however, would not be the fault of the cast, which is, by and large, top drawer. However, two hours of hearing songs about unrequited love, heartbreak and good girls going bad (many of which, to the untutored ear, might sound like the same song sung in different keys) might be something of a challenge for those who don’t drive pick-up trucks with a rifle rack in the back window.

Wynette, played by the engaging Katie Barton, came from humble beginnings, as is evidenced by the opening scene when she, as a young girl (the pert and multi-talented Lilly Tobin) is seen picking cotton. She is seen not only by the audience, but by Wynette herself, who has just passed away, with her mother, MeeMaw (the solid Marcy McGuigan) acting as Wynette’s guide as the singer eases into the afterlife. That’s the familiar frame for the show, a trip down memory lane taken by the recently deceased as she views the triumphs, failures and mistakes that constituted a life that, among other things, included five marriages and abuse of prescription drugs.

There’s also a touch of “A Star is Born” in the script, for the young Wynette soon hooks up with George Jones (Ben Hope – Barton’s husband in real life), a top country and western star with a drinking problem who earned the sobriquet “No-Show Jones” for his proclivity for missing shows as he pursued the genie in the bottle. As Wynette’s star rises, Jones slides into alcoholic despair. It should be a story that the audience cares about, but the script really doesn’t allow for much development – the couple’s relationship is handled in a series of sketches that don’t allow for much emotional investment.

Part of the reason for this emotional surface skating is that the show offers 28 musical numbers (albeit some of them truncated) – that’s a lot of music to cram into two hours. Although some of the songs do carry forward the plot, such as it is, many of them merely seem to be inserts – this is what Tammy sang at this point in her life, including the rather strange diversion into MTV-land with a quasi hip-hop number, “Justified and Ancient,” which is about as engaging as watching the Teletubbies on LSD.

It says a lot about the relative flat-line nature of the production that MeeMaw’s “God’s Gonna Get Me For That,” sung late in the second act in response to some mud slung by Hillary Clinton in Tammy’s direction, is the one number that truly brings the house to life. It’s sprightly and engaging, and McGuigan does a turn on the drums that simply ignites the audience.

Fewer songs and more character development would have served to bring to life a story that, although familiar (sex, multiple marriages and drugs lead to the downfall of a superstar) could still be engaging. As it is, Barton works with what she is given, on a set, designed by Daniel Nischan, that allows for movement stage left and right, with an occasional climb up stairs, stage-center, stairs that split the on-stage band. Given the set, many scenes have Barton ping-ponging left and right: I say this here, then I say that there. As with the songs so with the blocking – both become somewhat repetitive.

There are moments, however, when you sense what this musical play – revue?? – might have been, and that’s all to the credit of Barton, McGuigan, Tobin and Hope, who labor hard to infuse humanity and a sense of love, loss and inevitable change into a book that, as it is currently being presented, seems to be a pastiche of clichés. Barton makes you care, even when you don’t want to, and Hope gives his character a tragic edge – a man who can only handle fame and fortune by running away into the solace of alcohol. Tobin – as the young Tammy, the hair stylist Dolly Pardon, and one of Tammy’s daughters – often lights up the stage, and McGuigan nails line after biting line – so much so that you want to see more of her. When she exits (which is often) you can almost feel a palpable loss of energy, as if a plug has been pulled and the show is now working off lower wattage.

The mother-daughter conflict is the emotional heart of the show, but it is not allowed to beat as it should (as it does, say, in “Gypsy”). In the end, what that means is the show lacks focus, and because of that the audience doesn’t know what it is supposed to feel and how it is supposed to respond, although at the matinee I attended the packed house did respond vociferously at the curtain.

The show’s final coup de theatre suggests what might have been, but the image, as striking as it is, is not supported by the preceding two hours. What, in fact, is Tammy’s triumph, and do we care that the mother has finally acknowledged that her daughter is, in fact, not Virginia Wynette Pugh, but Tammy Wynette? We could have, but alas…

“Stand By Your Man” runs through April 5. For tickets or more information call 860-767-7318 or go to www.ivorytonplayhouse.org.
Posted by Geary Danihy at 5:05 AM