The Passion of Lisa Jura

"The Pianist of Willesden Lane" -- Hartford Stage -- Thru April 26 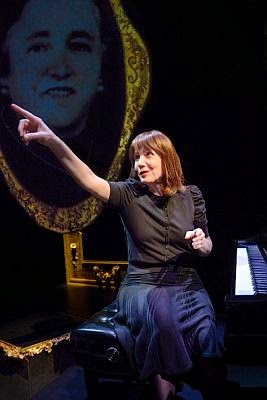 
What if Anne Frank had lived, if she had had a daughter, and that daughter decided to tell her mother’s story -- the story of a young girl’s life torn apart by war, a story of tragedy and eventual triumph – and tell it on the stage? The imagined emotional impact of that staging is akin to moments felt while watching “The Pianist of Willesden Lane,” which recently opened at Hartford Stage under the direction of Hershey Felder.

The play – part reminiscence, part delightful recital, acted out on a simple multi-tiered set (Trevor Hay and Hershey Felder) dominated by a dramatically lit Steinway piano – is the story of Lisa Jura, told by her daughter, Mona Golabek. It’s a reminiscence based on Jura’s family in , the Anschluss that disrupted and eventually destroyed the lives of many Jewish families and, central to the play, halted Jura’s piano lessons (for suddenly it was a crime to teach Jewish children). It is also the story of the Kindertransport that brought the 13-year-old, and thousands of other Jewish children, to . At this point in the play there is an echo of the pivotal moment in William Styron’s “Sophie’s Choice,” for Jura’s father has been able to obtain only one pass for the train – so only one child can go. It’s a haunting moment.

Once in England, working first as a maid and then in a factory sewing army uniforms, Jura, a child prodigy and piano virtuoso, never lost sight of her dream of becoming a concert pianist and playing Grieg’s Piano Concerto at her debut. This dream she eventually realized after receiving a scholarship to the Royal Academy of Music in . Thus, there is a happy, if bittersweet, ending to the tale, for although Jura eventually immigrated to and married the French resistance fighter who saw her playing piano at the in , there are many who are forever left behind in the darkness that was the Holocaust.

But the evening is also a recital of sorts, for Jura taught her daughters, Mona and Renee, to play the piano, and Mona Golabek became a renowned pianist in her own right and has enjoyed a lengthy solo career. Thus, there is Grieg and Chopin, Scriabin and Beethoven to be heard and enjoyed, the works interwoven – emotionally and intelligently – into the story that Golabek tells.

Part of the fascination of the evening is that Golabek is not a trained actress, but you’d never know that from the 90-minute performance she gives, seamlessly morphing from her own self into the persona of her 13-year-old mother and, along the way, giving us a German music teacher, stuffy British bureaucrats and landed gentry, and a woman, “more German than Jewish,” who runs a London hostel for child refugees, where Jura finds shelter and friendship, until a German bomb all but destroys the building.

The storytelling is intimate and obviously heartfelt, and is enhanced as Golabek plays, for she just doesn’t play but continues the story paced to the tempo of the music, which has been selected to enhance and reflect the tone and temper of the spoken word.

The evening’s final moments, enhanced by Jason Bieber’s subtle yet effective lighting design, end, or apparently so, on a quiet note as the images of many of those who have figured in the story (projections by Andrew W. Wilder and Greg Sowizdrzal) are projected onto large, gilt-framed ‘mirrors” and Golabek says “good bye.” The lights go down, there is applause, and then the lights come back up to the strains of the final movement of Grieg’s Piano Concerto, which Golabek plays with such emotion and fervor that you can feel the hairs on your arms rise with the electricity. It’s a stunning coda to an entrancing evening.

“The Pianist of Willesden Lane” runs through April 26. For tickets or more information call 860-527-5151 or go to www.hartfordtsage.org.
Posted by Geary Danihy at 3:51 PM