Sacred Heart University to Offer a BA in Theater Arts


Are actors born…or created? The answer is “Yes” and “No.”

Someone may be born with inherent acting talent, a unique way of capturing and holding people’s attention, but that talent is raw, and it must pass through an alembic to be refined. For some, that fire is the school of hard knocks, an on-the-job training that allows them to mold their skills in the bruised-ego and often judgmentally harsh “business” of acting. Others seek a more formal training, guidance that allows them to hone their craft in a supportive and nurturing (if still judgmental) environment. Thus, the existence of schools of drama, many of which are departments at colleges and universities. To the extant list of such programs has been added the opportunity to receive a Bachelor of Arts in Theater Arts at in , a double-major option that becomes available with the start of the fall 2015 semester. 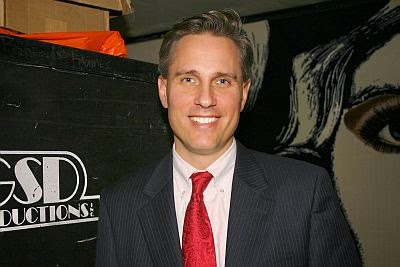 The driving force behind the creation of this new program is Jerry Goehring, Director of Performing Arts at Sacred Heart. However, Goehring is not an ivory tower theorist. He has been intimately involved with theater for over 25 years and, as a producer, has been nominated for both Tony and Grammy awards. He was lead producer for the box-office smash, “A Christmas Story, the Musical,” and has overseen such productions as the off-Broadway “Frankenstein” and national tours of “Raisin’ Cane,” “Oh, Figaro” and “A Child’s Christmas in .” He also served for four years as the executive director and CEO of the National Theatre of the Deaf, located in .

In a recent interview in Goehring’s office at SHU, he explained the gestation of the program, its scope, and the unique qualities of the program that will, over time, draw students who are interested in theater arts to the SHU campus.

“It’s been a long time coming,” Goehring said of the program. “It’s really been driven by the number of students now involved in our current program,” referring to those students active in one way or another in the performing arts on campus. “We started about six years ago – there was a little club and they asked me to start a theater department. There were, maybe, 12 kids in the club. Now we have a total involvement of 160 kids and 130 of them have participation grants, which is part of their financial aid package.”

As the number of students increased, the quality of the productions they were involved in improved, partly due to the status and talent of the theater people Goehring has brought in to teach and do practicums and mentoring.

“All of a sudden, the students started asking, ‘Well, when do we get more classes?’ It kind of grew organically and the plan became that the performing arts department, in total, was growing so fast that we would turn the academic corner very quickly.” Audrey in the grasp of Audrey II, in an SHU production

There will also be a host of electives, covering everything from choreography and black box production (basically, productions in an unadorned performance space, usually with black walls) to acting for the camera, the business of theater and summer stock.

“It’s a combination,” Goehring said, “of a major in theater with two tracks, musical theater and acting. We’ll grow from there; we’ll add technical tracks and design tracks depending on demand.” 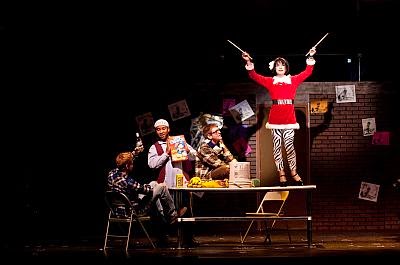 A scene from SHU's production of "Rent"

The program will be staffed by SHU professors currently teaching theater and related courses (such as English and media studies), with plans to bring in additional talent as the program evolves. The department Goehring chairs is currently “housed” under the larger Communications and Media Department, which allows the students to take advantage of all the technical “toys” available in that department, broadening their range of experience.

“We have this ‘performance motion lab,” Goehring said. “It’s an amazing thing. They (the Communications Department) have two TV studios that are fully functional, and they have another film studio, but then they have – well, you know how they filmed Avatar?,” referring to “motion capture,” or stereoscopic filming techniques. “Well, the next generation of ‘motion capture’ is without all of the dots,” the “dots” being the points created by sensors imbedded in the leotards that actors wear that allow computers to capture the actors’ motions. “The next generation of this technology,” Goehring said, “is without all of the dots. The computers are now sophisticated enough – you go into a room and all of these cameras are on you and you move and then you look at the monitor and you’re a stick or an elephant – it’s amazing.” 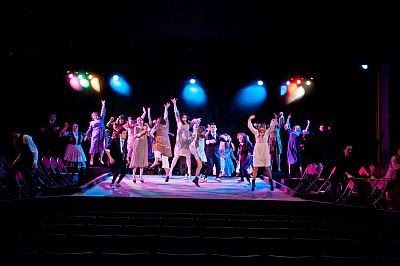 The cast of SHU's production of "Spring Awakening"

Touching on this new technology, and all that it offers, led Goehring to comment on what might be called the “return on investment” aspect of the new degree program. “All of this, if I want to go into my ‘convincing’ speech, that the program is a good thing,” Goehring said, “leads to the question: ‘Where are the jobs?’ We’ve gone through the stats at the Department of Labor in and we found that there’s a four percent growth in performance jobs right now and I would attribute that to really what is happening on-line. There aren’t a lot of stages being created around the country – everyone is still struggling to maintain what they have -- but with all of the content that is needed with the streaming that’s happening with Netflix and Apple, and then in video games – we have classes here on how to perform in video games – there are all of these opportunities that exist that weren’t there when I was in college.”

In essence, the answer to the question of “Why do theater” in college is that, for those students so inclined to pursue a career in theater arts, the opportunities for employment are growing because, as Groehling explained, “it crosses over into so many areas that we once didn’t even dream of. Of course, the students find that a little more exciting and the parents a little more comforting.”

The program at SHU has never been just about classroom instruction and theory. The campus has two theaters that are in constant use, either showcasing student productions or hosting road shows or individual performances.

“We do six major productions a year,” Groehing said. “We do more undergraduate productions than most universities in this state without even having a major in theater arts. Is it possible that we will do more? Yes. We’re now considering a summer theater program. There’s not a lot of summer stock left in the world and we thought that would be a good thing, bring in some pros to work with the students. You know, old fashioned summer stock.”

Goehring is also contemplating more productions during the year, but they will probably be centered more on the creative process, such as the current Theater Fest program, which is student-centered.

“They create their own plays,” Goehring explained. “I give them a little sample of what it is like out in the real world. We condense it into one year. It starts with ‘Show me your scripts.’ Last year I got 18 scripts and I chose 12 for a table read with audience talk-back, then I chose six of those and they got staged in black box style, with more audience talk-backs. Then I chose two to get fully produced in the little theater.” For an additional touch of the “real world,” the Theater Arts degree program will also deal with the reality of building a career in theater arts, the nuts and bolts of earning a living.

Goehring is being very conservative in his estimate of how many students will initially opt for the program. He expects, at most, 10 to 12 students to declare for the fall semester, but he’s honest in saying that he really doesn’t know what is going to happen. He believes, however, that once the quality of the program becomes common knowledge, a growing number of students will be attracted.

“The thing we offer,” Goehring explained, “is very hard for any institution out of the tri-state area to offer, especially a Catholic university, and that is the access to the artists we bring in not only to teach but the guest artists from the Broadway world. A lot of my friends come. For example, Craig Shulman, who’s an actor and teaches as well. He played Jean Valjean on Broadway for over 2,000 performances, more than anyone else in the world. He was the phantom in ‘Phantom.’ It’s that kind of caliber.”

Goehring, given his contacts and experience, has the ability to bring in professional talent – people who know how to do it in the real world – to talk about real life with the students. “Okay,” Groehing said, “you audition, that’s great, but now what do you do? How do you make a living, how do you pay rent, how do you build a career when you leave this sanctuary? It sounds so simple but a lot of places just don’t teach that, but when you have real-world people here teaching it’s a golden opportunity for these kids.”

Although Groehing has been extremely successful in what he calls the “real world,” he’s found a great deal of pleasure and satisfaction in his tenure at Sacred Heart, and that’s mainly due to the students who have opted to become involved in the theater program.

“It’s really amazing,” Groehing said. “It’s amazing to see, up until now without a full academic program, how good these kids are. High schools are really turning out some wonderful students. It’s fun to see who Sacred Heart attracts. Not just the performance quality, because it’s absolutely there, but the type of kids who come here. They have a good compass in their lives, they know what it’s like to work with people, and, you know, this is the most collaborative of art forms. I find the students who come here are just the most accepting group of people. They’re big hearts, but so smart. I can’t keep up sometimes. It’s just a real pleasure to be here.”

Hopefully, that pleasure will grow as Sacred Heart attracts more students with stars in their eyes and a love of theater. Even for those students who eventually do not opt to pursue a career in the theater, the experience that Sacred Heart now offers will influence their lives in ways they cannot imagine. Yes, there’s ‘no business like show business.’ It has its heartbreaks and its pitfalls, but there is something about participating in a theatrical production that speaks, somehow, to the core of what it means to be a human being, and perhaps that is, in the end, what education is all about.
Posted by Geary Danihy at 6:05 AM