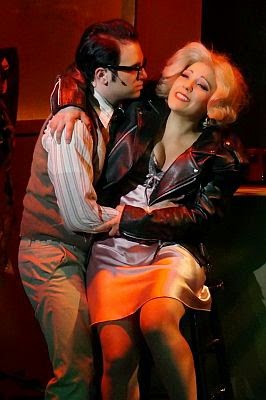 Anthony DiCostanzo and Elissa DeMaria
All photos by Joe Landry


Audrey II is making a big comeback in this season. The carnivorous plant will be showing up later this season in Ivoryton and is currently growing in leaps and bounds at MTC Mainstage in . Of course, Audrey II is the plant that, fed properly, draws customers to Skid Row’s Mushnik’s Florist, more famously known as the “Little Shop of Horrors.”

Those familiar with MTC’s new venue may wonder whether a show like “Little Shop” is a “fit.” Well, the answer is yes…and no, but not for the reasons one might suspect. As directed by Kevin Connors, MTC’s executive artistic director, the show has some glowing moments, but Connors and his production team are still getting the “feel” for their new location – what works and what doesn’t. Thus, there are some staging problems (a door that leads to the florist shop being one of them) and some questionable technical calls that distract rather than enhance. Thus, though “Little Shop” is entertaining, it is less than totally satisfying.

For those not familiar with the show’s book (written by Howard Ashman, who also wrote the lyrics), it is based on the low-budget 1960 Roger Corman film of the same name and deals with a nebbish named Seymour (Anthony DiCostanzo) who works (slaves) for Mr. Mushnik (Lou Ursone) in the florist shop along with the much-abused Audrey (a delightful Elissa DeMaria), who is currently dating a demented dentist named Orin Scrivello (Tony Lawson). 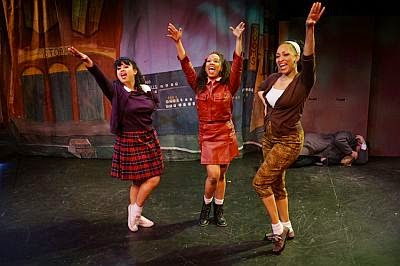 is into plants, so, immediately after an unexpected total eclipse of the sun, he spies a strange plant amidst the normal flowers a Chinese vendor has to offer. He buys it and brings it back to Mushnik’s. He tenderly cares for it to no avail – the damn thing just won’t grow, until pricks his finger on a rose thorn and the plant opens its maw. It craves blood. It grows, the florist shop thrives, but at what cost? Audrey II’s hunger becomes insatiable and poor descends into a Grand Guignol world from which he cannot escape.

Not, one might think, the stuff of musical theater, but who thought the story of a blood-thirsty barber bent on revenge and cutting his patrons’ throats would ever play? In “Little Shop,” the gore is minimal and the show floats on the delightful score written by Alan Menken (who also wrote the scores the Disney films “The Little Mermaid” and “Beauty and the Beast”). The opening number, “Little Shop of Horrors,” introduces the musical’s Greek chorus, which consists of three street urchins named Chiffon (Inuka Ivaska), Crystal (Kristian Espiritu) and Ronette (Gabrielle Lee). The trio, though lively, seems somehow slightly ill-matched, perhaps because their dance movements (choreography by Steven Midura) seem just a tad out of sync, and costume designer Diane Vanderkroef might have given them just a few more wardrobe changes – until late in the second act we see them in the same garb, and when they finally do appear in matching outfits they still seem somehow not to match. 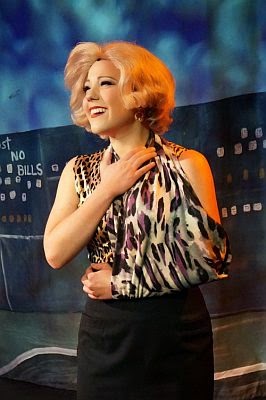 However, there’s some fine work being done here. DiCostanzo is effectively nerdy, and DeMaria gives her Audrey the essential Betty Boop persona that is expected. Ursone is believable as the harried Jewish florist, and Lawson is delightfully despicable as the demented dentist (and handles his many other roles with aplomb). As for Audrey II, Peter McClung gives the plant an appropriately demonic and sarcastic voice (He’s dead-on with his “Feed me!” plaint).

So, why carp? Well the complaints deal mainly with the set by David Heuvelman and the sound. First, the set, and the door to the florist shop. Said door is positioned extreme stage right, which means that if the florist shop is to be entered, everyone must make an full cross, but the shop is open for everyone to see, it is essentially the set, so why force the actors to deal with the door (sometimes they don’t). It’s simply a visual impediment. And then there’s the curtain (not sure what the design on the curtain is supposed to represent – it’s muddied and mottled) that is pulled back and forth, basically to allow the different Audrey IIs to be positioned. It’s something a high school production might have turned to for lack of any other solution. 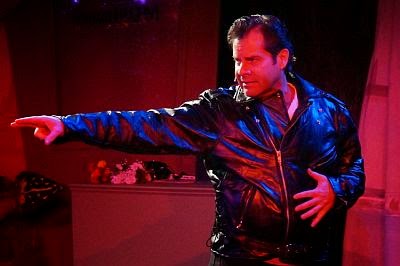 The biggest problem, however, is that given the size of MTC’s theater, should the actors be wearing body mikes, and if they do, should they be over-miked? Many of the song’s lyrics simply become mush and dialogue sometimes dissolves into mere throbbing mumbles. This is still an intimate venue – does the sound really need to be pumped?

“Little Shop” has its moments, and nothing can take away from the enjoyment of “Suddenly, ,” “I Am a Dentist” and, as rendered by DeMaria, the poignant “Somewhere That’s Green.” However, as a piece, the production seems somehow unfinished, somewhat tentative. It’s as if the creative and production teams weren’t exactly sure how to stage this show. In the end, it looks like truly creative, innovative decisions couldn’t be arrived at, so everyone just settled for the less than satisfactory.

“Little Shop of Horrors” runs through May 3. For further information or ticket reservations call the box office at: 203.454.3883 or visit: www.musictheatreofct.com.
Posted by Geary Danihy at 3:35 PM