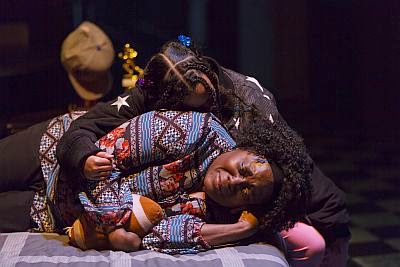 Yes, it’s a cliche, something every neophyte writer hears as he or she is learning the trade. It basically applies to prose writing, but it is equally applicable to the writing of drama, which may sound strange – of course drama “shows” things. After all, it’s being enacted on stage, right? Well, yes, but, the playwright has to decide what is shown, and that often determines the emotional arc of the play. These thoughts were precipitated after seeing “ song (b-side for tray),” which is currently on the boards at ’s Long Wharf Theatre under he direction of Eric Ting. Playwright Kimber Lee has made some obvious choices about what to show and what to tell, and in so doing she has, perhaps unintentionally, lessened the dramatic impact of a story that should leave the audience both shaken and pensive.

The play is set in the section of , , and focuses on one black family: the grandmother, (Catrina Ganey), her grandson Tray (Curtiss Cook Jr.) and her granddaughter Devine (Kaatje Welsh). It opens with challenging the audience, saying that the story shouldn’t start with her, that it shouldn’t start where it does. How true. For the story is about (there’s no spoiler in this) the senseless murder of her grandson. Thus, the play opens after he has been murdered and consists of a series of flashbacks interspersed with present-time moments that essentially seek to reinforce the senselessness of the 18-year-old’s death.

The decision to start at the end, as it were, is not new. Just think of William Holden floating face-down in a swimming pool at the start of “Sunset Boulevard.” However, the difference is that that film is not, centrally, about the death of Joe Gillis, Holden’s character, but rather about the deadly fantasy world that is . “,” however, is about ’s death and the environment and culture that shrugs off the loss of young black men as an everyday occurrence. As such, it has to make the audience feel the pain of that loss, and to do so it has to use dramatic tension.

Yes, it’s true that Greek tragedy, by and large, kept the death scenes off-stage, with some servant or messenger delivering the graphic details, but once again, plays such as “Antigone” are not, per se, about the death of the protagonists but rather about the decisions they make – and their fatal flaws – that lead to their demise. Such is not the case with the story Lee wants to tell, for , a hard-working high school student and Golden Gloves boxer who is seeking scholarships to allow him to go to college, does not do anything to cause the violent confrontation (which is not seen but told) that leads to his death. Thus, the audience is distanced, is in fact sheltered from the brutal reality of the environment that fights to escape.

That reality – gang violence, drug wars, the despair that forces young men, and women, onto the streets to carve out lives for themselves that offers few options – is only alluded to, often via Russell H. Champa’s lighting design and the sound design of Ryan Rumery, and, again, in a scene that tells rather than shows – Junior (Anthony Martinez-Briggs), Tray’s friend, meets Lena on a street and simply relates how Troy was killed.

What we are given, instead, is a strange sidebar story that deals with Merrell (Sung Yun Cho), Devine’s mother, who married Tray’s father (what happened to Tray’s mother we do not learn) and, when the father becomes another casualty of the violence that permeates the neighborhood, deserts her daughter and sinks into an addictive fog. After several re-habs, she reappears as – get this – ’s tutor, helping him to write essays to secure scholarships. If that plot twist is not enough to make one squirm, then she also appears at the Starbucks where works to apply for a job, and is charged with interviewing her, which leads to an extended scene in which helps her learn the ropes of the coffee-vending business. It’s meant to show ’s humanity and capacity for forgiveness, but it goes on for too long and essentially leads nowhere. It also allows Lee to throw in some thoughts about mixed-race marriages, to what purpose is not apparent.

Returning to Lena’s monologue at the start of the show, it deals, in part, with how the general public shrugs off the senseless murders of young black men – the slayings are just another news item, fifteen seconds, with film, that’s been heard and seen before. ’s point is that the young men who die on the streets are not, to their families, merely names, they are people. Her plaint is that we should care about these young men, about the tragic loss, but Lee’s play seems to do everything in its power to make us not care, to divert our attention from the reality of the mean streets that took ’s life, and our responsibility for those mean streets. The play should have delivered a punch to the gut.  Rather, it gives the audience a pat on the shoulder for being attentive for longer than 15 seconds.