"The Importance of Being Earnest" -- Playhouse on Park -- Thru May 3 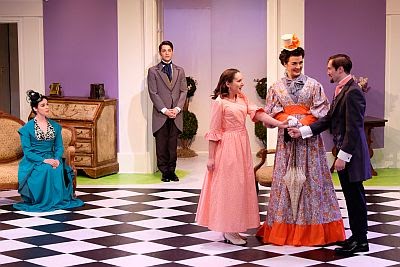 In 1895, Oscar Wilde’s “The Importance of Being Earnest” opened at the St. James’s Theatre in . Though an immediate success, it ran for only 86 performances, for the production could not survive its playwright’s charging the Marquess of Queensberry with libel, a not altogether wise move, since the ensuing trial brought to light Wilde’s homosexuality, which was a criminal offense euphemistically called “gross indecency.” The playwright himself was subsequently tried, imprisoned, and would live for only five more years. The play, however, has lived on, has been revived many times and filmed three times. Wilde’s most popular play is now on the boards at Playhouse on Park, and although it creaks a bit with age, and stutter-steps a bit in the ensemble scenes, it still has enough of the original Wildean wit and sufficient farcical moments to make for an enjoyable evening of theater.

The basic plot is that two gentlemen, Jack (a very effective Michael Raver) and Algernon (James Parenti) have contrived to create false identities to allow them to escape the countryside (Jack) and the city (Algernon). Jack’s reason to be in the city so often is to get his “brother” Ernest, out of trouble; Algernon’s release from the city takes the form of visiting a perpetually ill friend named “Bunbury.” Neither Ernest nor Bunbury exist. However, problems arise when Jack’s inamorata, Gwendolen (Jane Bradley) declares that she could never love a man who was not named Ernest (the name Jack has assumed while in the city). The problems are compounded when Algernon visits Jack’s country estate (in the guise of Jack’s brother, “Ernest”) and falls in love with Jack’s ward, Cecily (Laura Hankin), a young lady who is also smitten with the name of Ernest. There are more plot points (many), but suffice it to say that confusion is the order of the day and is resolved only when Miss Prism (Donna Schlke), Cecily’s tutor, reveals the provenance of a certain black handbag (complete with handles). 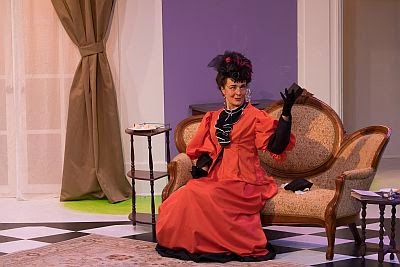 Under the direction of Jerry Winters, this production has the feel of an ocean tide: things both flow and ebb. Most of the flow occurs in many of the two-character scenes, those between Jack and Algernon and, in the second act, the sparring between Gwendolyn and Cecily. The pacing is often dead on to support the farcical nature of the play and the banter is lively, though one might ask that some of Wilde’s witty one-liners were not telegraphed as being just that – the best way to kill a bon mot is to deliver it with verbal italics.

Problems arise when more than two characters are on stage. The pace of the production seems to slow and the farce becomes somewhat ponderous. This often occurs when Lady Bracknell (Katrina Ferguson), Gwendolen’s mother, sails into view. She is supposed to be formidable, and she is, but one might wish her to be a bit more biting and a tad less studied in delivering her pronouncements. 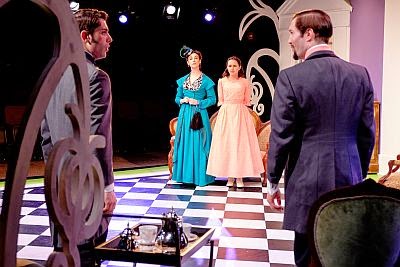 Given the configuration of the Playhouse’s stage, blocking is always a challenge. Winters has opted to use every available inch of space and address the audience members regardless of where they are sitting, and while this often sets up some interesting visual dynamics it also leads to crosses without motivation – often, watching the actors move from one position to another you can almost hear the director’s voice shifting them as if they are chess pieces. This occurs when more than two characters are on stage – the blocking for the two-character set-pieces is, on the other hand, very effective.

The pace of farce should be that of an on-rushing train, for much of the audience’s pleasure is to be derived from not being able to catch its collective breath from one scene to the next (necessary often because the plots in farce often border on the barely believable – hence you can’t give anyone watching the opportunity to pause and ponder). This production of “Earnest” allows for too many stops at local stations. Perhaps, as the actors begin to own the play, the train will gather speed and what is currently enjoyable will become delightful.

“The Importance of Being Earnest” runs through May 3. For tickets or more information call 860-523-5900, X10, or go to www.playhouseonpark.org