"The Good Doctor" at Square One 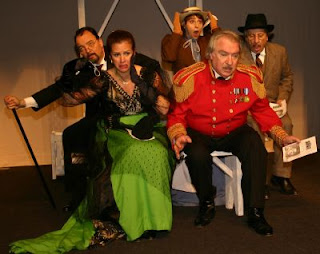 Square One in Stratford is winding up its season with a production of Neil Simon’s “The Good Doctor,” a hybrid of sorts that is consistently pleasant but seldom uproarious. Based upon several short stories by Anton Chekhov, the play is a series of “playlets” held together by the narration of The Writer (J. Kevin Smith), obviously meant to be Chekhov. These vignettes are a curious mix, for the most part neither fish nor foul, mainly due to their provenance.

As anyone who has sat through a college lit. class will remember, short stories rely more on character revelation than plot, while most plays (save for the avant-garde pieces of the moment) are plot driven, with rising and falling action. Hence, what we have with “The Good Doctor” is Simon’s attempt at turning short story fodder into a comedic theatrical feast. Alas, something is lost in the process.

After a brief introduction by The Writer, audience members get a good indication of what the evening holds for them with “The Sneeze,” a low-key, typically Russian character study of a minor bureaucrat who fixates on a social faux-pas that occurs when he and his wife attend the theater: he sneezes on his boss who is sitting in front of him. There is much mulling over of the mishap as Chekov/Simon pokes gentle fun at the bureaucratic mindset, all leading to a final twist that is more literary than dramatic.

The actors in this first scene try on some accents (I heard Russian, a touch of German and even a little Yiddish). Fortunately, the accents are set aside after this first effort, save for an anachronistic “Brit” accent that Frank Smith uses in “The Drowned Man” during the second act.

“The Sneeze” is followed by “The Governess,” in which the lady of the house (Lillian Garcia) seeks to teach a mousey governess (Michelle Duncan) a lesson, or does she? Here again, the bones of the short story are there for all to see, but it is not obvious who is exactly manipulating whom. It’s a matter of tone and inflection, with Duncan’s governess giving a flashing of the eyes to the audience at the end that says she has been in control all along, something that is not justified by how the scene is played..

“The Seduction” follows, which has a roué (J. Kevin Smith) seducing a young wife (Garcia) via her husband (Joseph Mallon). It has its smile-inducing moments, but it has the feel of drawing room farce without the farce, although director Tom Holehan has here given a nod to the melodramatic style of acting common during the period of the piece (when the villain would snarl “Curses!” and curl his oiled moustache), by having his actors, especially J. Kevin Smith and Garcia, use hand motions to emphasize the meaning of the dialogue: Garcia crosses her hands in the general area of her loins during the culminating moment of the seduction; Smith tries to avert her words by holding his hands up to her and his face. 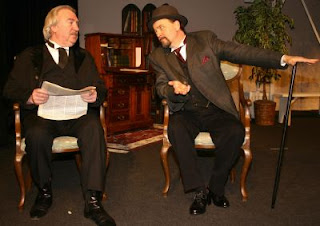 The aforementioned “Drowning Man” opens up Act Two, and it is even more curious than what has come before, for there is a certain Kafkaesque nature to this tale of a man who will perform his own drowning for a fee (I was reminded of Kafka’s “The Hunger Artist.”) This is followed by a brief vignette that Simon added to the play especially for Marsha Mason, and it’s a mini-tour de force for an actress, since it allows her to deliver the closing lines of all three sisters from Chekhov’s “The Three Sisters.” Duncan takes full advantage of the opportunity, and deservedly so since all her other roles in the play call upon her to be a shrinking violet. 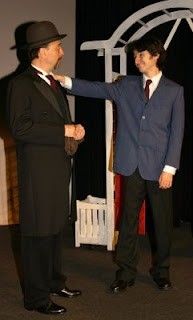 It is in the final piece, “The Arrangement,” that Simon seems to step out in front of his Chekovian alter-ego, for although the form is still that of the short story, the dialogue has obviously come from Simon’s pen as a father (J. Kevin Smith) seeks to make a man of his son (Alex Carrasco) by bringing him to a bordello for his initiation into the priapic world. The result is the most humorous and entertaining effort of the evening.

The overall production makes for an enjoyable if not entrancing evening of theater. “The Good Doctor” has its moments (though what a doctor has to do with the show escaped me), but they are often more contemplative than you would expect from a Neil Simon effort.

“The Good Doctor” runs through May 26. For tickets or information call 203-375-8778 or go to www.squareonetheatre.com