Into "The Woods" Darkly

"Into the Woods" -- Westport Country Playhouse 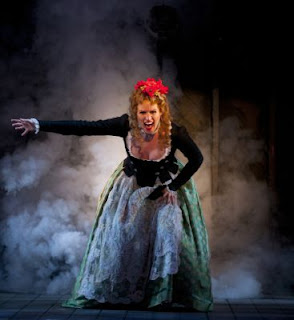 Lauren Kennedy as the Witch in Stephen Sondheim and
James Lapine’s “Into the Woods.” Photo by T. Charles Erickson

There are two kinds if people in the world: those who don’t like Stephen Sondheim musicals and those who do. For the latter, a good return on the investment of two and a half hours can be found currently at the Westport Country Playhouse, which has chosen to open its 2012 season with an energetic production of Sondheim’s 1986 musical “Into the Woods.”
This pastiche of fractured fairy tales, with a book by James Lapine, is quintessential Sondheim, who can pack more words into a line of music than just about any other composer, and the words are, by and large, witty and often thought-provoking. In this case, the words are derived from multiple fairy tales, most of which were introduced to the world by the Brothers Grimm. We have Cinderella, Little Red Riding Hood, Rapunzel and Jack and the Beanstalk, their stories all held together by the that of a baker and his wife who, because of a witch’s curse, are childless. For various reasons, all and sundry must go “into the woods” to fulfill their various quests.
The opening scene has many of the characters sitting lifeless on the stage like tossed aside dolls until they are brought to life by the Narrator (Jeffrey Denman). This is a visual allusion to the automatons that so fascinated the public during the late 18th and early 19th centuries, mechanical dolls that could walk and often talk, an allusion that is returned to several times during the evening, though what it adds to the overall production is debatable.
Throughout Act One, which is the more vigorous and entertaining of the two acts, the various fairy tale stories intertwine as Jack (Justin Scott Brown) sows his magical beans, Cinderella (Jenny Latimer) runs away from her Prince Charming (Nik Walker), and gets to sing the very witty “A Very Nice Prince,” Little Red Riding Hood (Dana Steingold) confronts the wolf (also played, with delightful lasciviousness, by Walker), Rapunzel (Britney Coleman) lets down her hair for her prince (Robert Lenzi), and the baker (Erik Liberman) and his wife (Danielle Ferland) seek to find four items that the witch (Lauren Kennedy) has requested as the price to lift her curse on them. 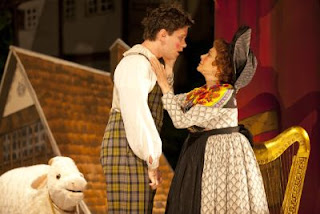 Justin Scott Brown (Jack) and Cheryl Stern (Jack’s Mother).
Photo by T. Charles Erickson
Lapine and Sondheim’s take on all of this is, at least in the first act, fairly straightforward, although the dialogue and lyrics give a modern, often ironic twist to the various fairy-tale set-ups. The first act’s closing number, “Ever After,” has all of the characters achieving their goals and the implication is that the fairy-tale “Happily ever after” reigns. It’s a bring-down-the-curtain number, so much so that the Narrator must announce, “To be continued,” to let the audience know that it is, in fact, not over. There’s more to come.
The fact that there is more to come is where the problems begin, for it is in the second act that Sondheim and Lapine get a bit ponderous, and there’s not much that director Mark Lamos can do but have his cast wade through all of the messages and morals that prevail as the show explores the idea of what “happily ever after” means. However, there are some high points here, especially the eleven o’clock song written for the witch, “Last Midnight,” and the baker’s wife’s song, “Moments in the Woods,” sung after she has had a romantic encounter with Cinderella’s prince. However, two hours into the show, “No More,” the ultimate “message” song sung by the baker and the Mysterious Man (Jeremy Lawrence) seems to go on for an eternity. Yes, yes, yes, we get the point…the sins of the father and all that. There is, however, a reward for sitting through the second act: the touching “No One is Alone” followed by the finale, “Children Will Listen,” which segues into a rousing and well-choreographed (compliments of Sean Curran) “Into the Woods.”
For Sondheim fans, what makes the evening well worth the price of a ticket is the cast, which is, by and large, stellar. Although Lieberman is a bit too hyper as the baker, Kennedy’s witch is arch and world-wise (even though she does chew the scenery a bit), Latimer’s Cinderella is engaging and astute, and Steingold’s Little Red Riding Hood…well, she basically steals the show. If you look up the word “droll” in the dictionary you’ll probably find her picture attended to the definition.
The show runs through May 26.  For tickets or more information call 203-227-4177 or go to www.westportplayhouse.org