"The Tempest" at Hartford Stage 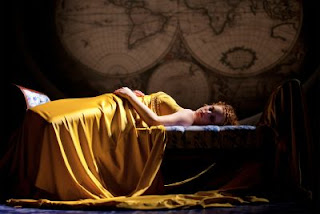 It’s often difficult to discern the influence a director has on a production, for his or her decisions are often made manifest in such subtle ways that only those privy to what occurred during rehearsals can acknowledge them. Such is not the case with “The Tempest,” which recently opened at Hartford Stage. Director Darko Tresnjak’s creative hand can be seen even before the lights go down and is confirmed in the opening shipwreck scene in which a sleeping goddess becomes a ship’s figurehead and yards of flowing, luminescent material are formed into the storm-tossed vessel. It’s a visually stunning moment, accented by lightening and thunder, that presages many of the delights to come.

Shakespeare’s last play is, unlike most of the Bard’s other plays, a work crafted solely from the playwright’s imagination, for scholars can find no provenance for it. It is, in fact, a theatrical flight of fancy complete with spirits and sprites, a changeling and a manipulative magician who controls the elements. Thus, it lends itself to fanciful interpretation, something that Tresnjak has taken full advantage of.
The basic plot embraces many of Shakespeare’s common themes of betrayal, revenge, abandonment and reconciliation. Twelve years before the opening scene, Prospero (Daniel Davis), the Duke of Milan, had been usurped by his brother, Antonio (Jonathan Lincoln Fried), abetted by Alonso (Christopher Randolph), the King of Naples. The duke and his young daughter Miranda (Sara Topham) are set adrift in an unseaworthy vessel to drown in the open sea. Instead, they land on an island inhabited by a changeling, Caliban (Ben Cole), a spirit, Ariel (Shirine Babb), and several attending sprites and goddesses (Joshua Dean, Jane Cracovaner, Annastasia Duffany, Mark Adrian Ford and Jillian Greenberg).
Over the years, Prospero devotes himself to tutoring his daughter and studying magic until, as the fates would have it, a ship carrying Alonso, Antonio, Sebastian (David Barlow), Alonso’s brother, Ferdinand (William Patrick Riley), Alonso’s son, and a court functionary, Gonzalo (Noble Shropshire), sails near the island. Prospero conjures up a storm in which the ship is ostensibly wrecked and all aboard are cast onto the island where, over the course of one day, Propsero will ply his magic to at first torment and then reconcile with those who had turned against him.
After the stunning shipwreck, they play slows almost to a crawl as Prospero explains to Miranda how they ended up on the island. This necessary piece of extended exposition is lightened by Miranda’s attention to the story and her reactions, for the lithe, winsome Topham is a delight to watch. She is the epitome of innocence flavored with inherent female wisdom, which she reveals with no more than a turning of the head and a knowing look mid-way through Act Two as her father warns her to go slow in her budding romance with Ferdinand.
Davis’ Prospero is fully realized, for Davis instills both majesty and erring, all too fallible humanity into his character. His command of the stage and his role are made obvious early on and are maintained throughout the entire evening, right up to his closing lines (which can be also heard as Shakespeare’s adieu to the stage): “Now I want / Spirits to enforce, art to enchant, / And my ending is despair / Unless I be relieved by prayer / Which pierces so that it assaults / Mercy itself, and frees all faults, / As you from crimes would pardoned be, / Let your indulgence set me free.”
In fact, the entire cast is superb. I would have wished Cole had found a way to modulate the delivery of his lines (he is in high dudgeon throughout most of the play), but his interpretation of the witch’s son is still compelling. Under Tresnjak’s thoughtful, ever imaginative direction, the actors each have their stellar moments. As an example, mid-way through the play, Antonio and Sebastian conspire to slit the throats of Gonzalo and Alonso. One would think there would be little humor to be found here, but Tresnjak turns the moment into a delightful comic set-piece, with Fried and Barlow displaying artful timing.
The laughs become outright guffaws when Stephano (Michael Spencer-Davis) and Trinculo (Bruce Turk) make their appearance. Playing two of the ship’s crewmembers, the two actors take full advantage of Shakespeare’s talent for penning farce, cavorting across the stage, baiting Caliban, and in Trinculo’s case, humorously interacting with the audience.
The actor’s performances are enhanced by Tresnjak’s flair for spectacle, which he exercises, supported by Michael Chybowski’s bold, dramatic lighting, in the introduction of a crystal-laden dining table, a tableau of dancing and whirling sprites, and the appearance of a dark demon complete with huge, slowly flapping wings. The production’s overall concept is carried through by scenic designer Alexander Dodge and costume designer Fabio Toblini, for they have focused on the fact that the play is a fantasy of words and thus use these words as a primary motif in costume and stage set.
In sum, “The Tempest” is a delightful, eye-pleasing evening of creative theater that the Bard himself would have been both envious of and pleased with. In the program notes Tresnjak writes that the creation of a production, and the subsequent viewing of it, often becomes “a memory in an instant.” In the case of “The Tempest,” it is a very fond memory.
“The Tempest” runs through June 10. For tickets or more information call 860-527-5151 or go to www.hartfordstage.org.