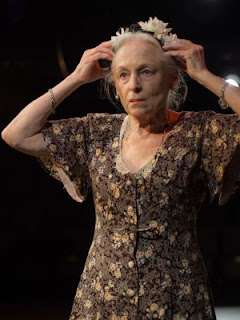 Having recently been assaulted, in more ways than one, by “The Killing of Sister George” at , it was a true relief to sit in the dark at Playhouse on Park in and watch three accomplished actors weave their magic as they slowly yet surely created characters that resonated and touched both the heart and the soul. I’m talking about the indomitable Daisy Wertham, the wise, down-to-earth Hoke Colbum, and the much put upon Boolie Werthan, three people who, over a span of 25 years, come to learn much about each other, themselves and the ways of the heart. I’m talking about Alfred Uhry’s Pulitzer Prize winner, “Driving Miss Daisy.”

Set in , the story is a simple one. Miss Daisy (Waltrudis Buck), a well-off Jewish widow, is getting on in years and, though she vociferously says nay, has become a road menace. Her latest accident prompts her doting son, Boolie (Bristol Pomeroy) to seek a driver for his cantankerous mother. He interviews and hires Hoke (Marvin Bell), but Miss Daisy will have none of it, so for the first five days of his employ, Hoke sits in the kitchen with the cook. But on the sixth day (the same number of days, Hoke points out in a phone call to Boolie, God took to create all that is), her cajoles her into letting him drive her to the local Piggly-Wiggly. On the way they have their first of many arguments about driving, appropriate routes and who’s actually in charge.

What unfolds from these opening scenes is a graceful, gentle examination of the ways of the heart. As time passes, Miss Daisy and Hoke grow closer as the world they live in begins to radically change. They grow older and the world turns harsher and more violent, forcing them to create a bond that will shield them from the vagaries and vicissitudes of life. In the end, all they have is each other…and it is enough. In a touching moment, Miss Daisy reaches out to Hoke and says, “You are my best friend.”

Under the direction of Stevie Zimmerman, this strong cast draws the audience into their characters’ world, framed by a bare-bones, turn-table set by Tina-Louise Jones that trusts the audience to fill in the blanks. At the center of it all is Miss Daisy, and Buck is, to put it simply, luminous. Beneath Marcus Abbot’s subtle yet effective lighting, Buck shimmers and glows, up-tight and upright yet creating an aura that hints at the girl that still lurks beneath the iron-willed façade. She deftly handles Daisy’s gradual change of heart about Hoke, and about the life that swirls about her, facial expressions and body language often conveying more than the lines she speaks. It’s a warm, wise performance. 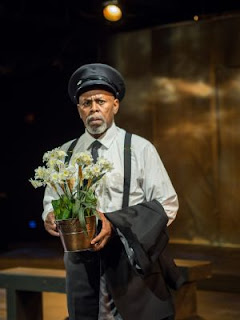 Equally nuanced is ’s Hoke. He, even more than Buck, relies on body language to convey undertones. Respectful yet never subservient, his Hoke effectively conveys the wisdom gleaned from living in a society where “truth” is a matter of who is speaking and the color of the speaker’s skin. ’s eyes, especially in the driving scenes -- acted out on two plain, rectangular boxes -- speak volumes. 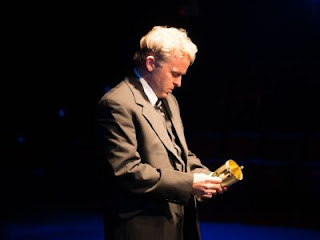 Buck’s and ’s performances are underpinned by the steady, sure Pomeroy, who is, by and large, charged with reacting to the two other characters. This he does with a great deal of style, creating a sounding board for Miss Daisy and Hoke while, at the same time, filling out his own conflicted character, that of a good man of business who must deal with the realities of segregation and religious prejudice.

Having seen this play several times, I am still moved by its final scenes, for these are perhaps some of the most moving scenes in modern American theater. The eating of the pie (I won’t explain, for those who haven’t seen the play) is a physical moment that is riveting and, as handled by Buck and Bell, cannot help but bring tears to the eyes, tears of joy, for there is a marvelous affirmation of humanity in the closing scene of “Miss Daisy,” and all involved – especially lighting director Abbott – understand this. In a world beset by strife, two people caring for each other, in such an intimate way, makes the heart glow.

There are many holiday productions currently running, but if you want to be embraced by the spirit of giving, and loving, then between “The Nutcracker” and “A Christmas Carol,” go see “Driving Miss Daisy,” for the play captures the essence of the season, which is, after all, all about what we give to each other out of love.

“Driving Miss Daisy” runs through Dec, 23. For tickets or more information go to www.PlayhouseOnPark.org
Posted by Geary Danihy at 10:41 AM