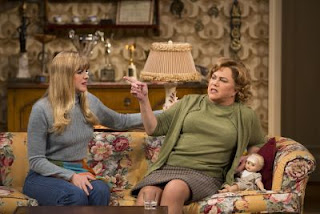 What an odd and offensive little play we have here in “The Killing of Sister George,” which recently opened at the renovated Long Wharf Theatre under the direction of its star, Kathleen Turner. Written in 1964 by Frank Marcus, and adapted by Jeffrey Hatcher, it is a tip-toe-through-the-tulips take on a lesbian relationship written at a time when the “L” word could not be spoken on the legitimate stage, as well as a dissection of politics at the BBC as one of its popular radio soap operas starts to suffer a ratings loss. Thus, it is of two minds, or, to put it another way, it is schizophrenic. When it focuses on the BBC politics it by and large works, but when it focuses on the homosexual relationship between the two women it stumbles badly, and that’s not because of the restrictions under which it was written. To imply that domination and cruelty is at the heart of a lesbian relationship rankles. Program notes indicate that an effort was made to take into account 21st-century sensibilities. I beg to differ.

The soap opera is called “Applehurst,” the name of the town where the characters, chief among them the beloved nurse Sister George (Turner), interact. On the show she is an earth mother, but in reality, June Buckridge is an earthy, gin-swilling pain in the ass who just happens to have inveigled “Childie” McNaught (Clea Alsip) to be her flat-mate (and implied lover). Buckridge is also a dominatrix, which means she threatens ’s doll collection with dismemberment, forces “Childie” to eat her cigar butts while on her knees, and kiss the hem of her dress while begging forgiveness. Yup, that’s lesbianism for you (there’s also implied beatings and other physical and psychological tortures). And, mind you, the script has been “updated.”

Again, the program notes – this time written by Turner – suggest that the rewrite has given everyone a chance to “truly explore the complexities of these characters and their relationships…” Well, that may be so, but I wouldn’t be surprised if Ellen DeGeneres decided to picket the remaining performances.

And so, to the performances. Turner seemed a bit studied – in both her movements and delivery of her lines -- in her opening moments, and throughout the evening her accent suggests she had been coached by Winston Churchill: the lines are broken and often guttural, if not slurred (appropriate only when she is portraying the character as being three sheets to the wind). Her character comes alive in the second act, especially when Sister George has finally been killed, but you never sense the core of this character, what she really wants, what she really fears, what drives her to persecute her presumptive lover. Given that the play is set (and was written) in the 60's, when “polite” society condemned same-sex relationships, Sister George’s sadism begs for exploration. It’s not there.

In the final moment of the play -- a nod to the closing scene in the iconic Marlene Dietrich/Emil Jannings film, “The Blue Angel” -- Sister George moans or, more appropriately, “Moos,” but what are we to make of this? I’m not sure. And do we really care? Certainly not for Sister George.

As the much put-upon roommate, has a tough job selling that she would allow herself to be so demeaned by Sister George. By and large, she pulls it off, but her moments of feistiness lower the believability quotient re. the six-year relationship: why would she stay? There’s a confrontational scene late in the second act that is supposed to explain it all, but it just makes the Sister George character out to be more of a manipulative succubus.

As the BBC’s ax-woman, Mrs. Mercy Croft, Betsy Aidem gives us a buttoned-up exec who may also have lesbian inclinations, or may just be motherly. In any event, she is all business, and is the only actor who consistently articulates all of her lines so that they may be heard and understood. As for the lines, many of them (often those meant to elicit laughs) are filled with references to period British culture or slang and so went over the heads of most of the opening night audience.

Finally, there’s the odd-woman-out, in that Madame Xenia (Olga Merediz), the downstairs neighbor who tells fortunes, doesn’t seem to have any “L” leanings. She’s the comic-relief character, and by and large fulfills her role with style and humor.

Though “The Killing of Sister George” has been re-worked, the primary relationship between Sister George and “Childie” – the heart of the play -- not only doesn’t ring true, it’s offensive. The talents of all concerned, especially ’s, would have been put to better use in reviving a more cogent and unified play.