Not an Ebenezer for the Ages 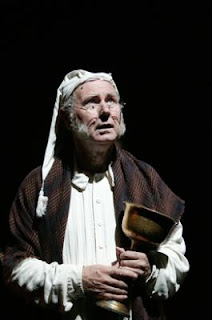 Since it’s appearance over a century and a half ago, Charles Dickens’ “A Christmas Carol” has been riced, diced and carmelized for stage, radio and the silver screen. There have been numerous iterations of the tale of the cold-hearted man of business who eventually comes to appreciate the true meaning of Christmas, and just about every male actor of a certain age, save Johnny Depp and Tom Cruise, has taken a shot at the role. At Hartford Stage, Bill Raymond has been playing the role for 13 of the 15 years the venue has been presenting the tale as its holiday offering, which means he owns the role, which means, apparently, he can do whatever he wants with it, which means director Maxwell Williams has allowed Williams to make Ebenezer Scrooge into a dithering, scene-stealing, schtick-meister who is not above milking a dead cow for all it’s worth.

Whatever Raymond’s Scrooge was when he first played the role, the iconic character has, in Raymond’s hands, become a vaudevillian stereotype living from one piece of stage business to another. Here’s Scrooge locking and then unlocking his desk so he can pay Bob Cratchit (Robert Hanlon Davis) his wages. Of course, there are multiple keys and multiple locks, and the bit goes on forever, with Raymond doing a lot of Three-Stooges mugging. Then there’s Raymond sword-fighting one of the imaginary spirits that his deceased partner, Jacob Marley (Noble Shropshire), will send to redeem him. It, too, goes on forever – Raymond even gives us a moment from Star Wars in the process. Then there’s Raymond eavesdropping on his nephew Fred (Curtis Billings) as he hosts a Christmas dinner and orchestrates parlor games. Raymond’s Scooge is so entranced by the games that he becomes delirious, babbling to the Spirit of Christmas Present (Alan Rust), becoming little more than a hyperactive child. Enthusiasm devolves, blathering prevails.

And what’s wrong with all of this? Well, two things. First, Raymond consistently draws attention to himself as the actor rather than the character he’s portraying. Second, if we are to be moved by Scrooge’s epiphany, then we have to believe that he really is this cold-hearted skinflint who would send urchins to the poor house. Just about everything Raymond does is done with an implied wink, as if to say, yes, I seem to be this nasty, cold-hearted creature but, wait a bit and you’ll see there’s a heart of gold beneath this flinty exterior.

However, most of the opening night audience didn’t seem to mind the mugging, and the production does have its moments. The interaction between a younger Scrooge (again, Curtis Billings) and his fiancé, Belle (Gillian Williams) is touching, and Scrooge’s maid (again, Nobel Shropshire) selling her master’s clothing is a nice little set-piece, and Fred’s party, until Scrooge dissolves into inanity, is engaging. In fact, whenever Scrooge is not stage center the production evinces comfortable warmth and moving pathos evocative of the original story.

As with most Hartford Stage offerings, the production values for “A Christmas Carol” are solid. How can you go wrong with flying ghosts, ornamented sleighs, a Christmas tree festooned with lights and ornaments, thunder, lightning, clock faces whirling on the stage floor, Hell’s door opening, a very large rubber goose, a bicycle-riding winged demon and enough golden glitter and plastic snow to fill a hundred garbage bags? Yet it all seems beside the point, for without the heart of the story everything else is just out there for show, for the “Ooh!” and “Aah!” value, making this iteration of “A Christmas Carol” a zombie. It walks and it talks, but there’s no heart beating beneath the surface.

The show runs through Dec.29. For tickets or more information call 860-527-5151 or go to www.hartfordstage.org

For CT Theater News and Reviews and Artes Magazine
Posted by Geary Danihy at 2:27 PM