Revealing the Inner Brat In All of Us 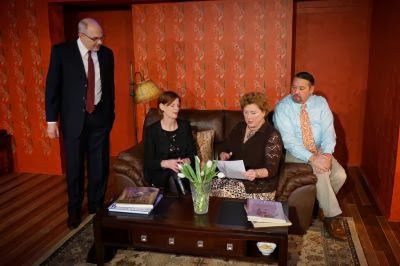 We’ve all had playground confrontations, all faced the mini-bullies of the world. Sometimes we folded and other times we stood up to those who felt compelled to force their childish dominance and we gave as good as we got.

There were tacit rules to the confrontations, and the last thing we wanted was our parents intervening, because parents had, we innately understood, forgotten what it was like to be a kid, forgotten that a schoolyard tussle and its aftermath often taught valuable lessons. That’s because parents have their own issues that simply can’t be (or shouldn’t be) resolved by a quick punch or, in the case of the unseen children in Yasmina Reza”s “God of Carnage,” a blow with a bamboo stick. After all, parents have made commitments to each other and have signed up to raise, and protect, their children, even if the offspring may be bringing chaos incarnate into their lives. Ah, but the adult sophistication is a patina covering what lurks beneath: the childish urge to strike out, defy, taunt and condemn…to confront each other in life’s schoolyard screaming “You are too!” and “I am not!”

Reza’s exercise in adult dissimulation, regression and repressed aggression, originally titled Le Dieu du carnage and translated by Christopher Hampton, garnered multiple Tony nominations for its Broadway cast in 2009. It is now on the boards at ’s Music Theatre of Connecticut under the direction of Mark Torres, and in the theater’s intimate setting the anger, frustration and inner-childishness of two couples is on full, frightening and decidedly enjoyable display. 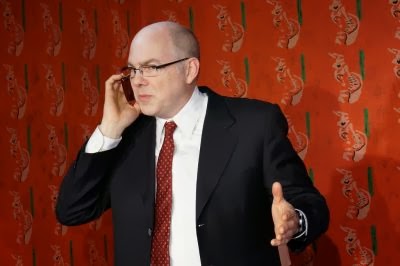 The plot is relatively simple: two 11-year-olds, Benjamin and Henry, got into a fight at school and Benjamin knocked out two of Henry’s teeth with a stick. As the play opens, Benjamin’s parents, Alan (John Flaherty), a preoccupied lawyer, and Annette (Marty Bongfeldt) drop by to see Henry’s parents, Michael (Jim Schilling), a wholesale distributor of household goods, and Veronica (Cynthia Hannah), to make amends and calm the waters with a “Let’s be reasonable” attitude. After all they are adults. Yet each “adult” hides behind various masks and over the course of the 80-minute, one-act play, these masks are torn away, revealing the couples’ frustrations with their marriages, with their children and, in Michael’s case, with a parent, and with the demands of political and social correctness that supposedly keep in check the terrible-two-ness that lurks in all of us. 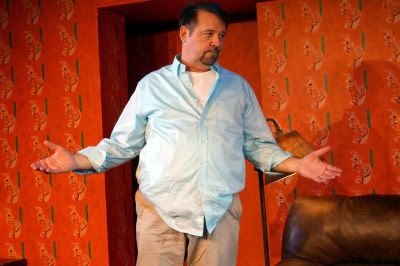 As Alan, Flaherty gives us a man consumed and made cynical by his profession who treats his cell phone as an extension of his body. Throughout the play, Alan constantly takes calls from a Big-Pharma client with recall problems. His attitude towards the possible injurious side-effects of his client’s product mirrors his attitude towards the children contretemps: dissemble and, when necessary, cut your losses.

Playing his wife, Bongfeldt creates a woman with a veneer of suburbanite sangfroid who, as her patience is tested by both her husband and the other couple, reveals an acerbic tongue and a willingness to cat-fight with the best of them.

Other masks fall away as the couples begin to snipe at each other. Schilling’s Michael soon reveals his inner-slob, while Hannah’s Veronica gradually shows her rational humanitarianism to be essentially self-serving, allowing her to taunt others with a “Holier-than-thou” attitude. 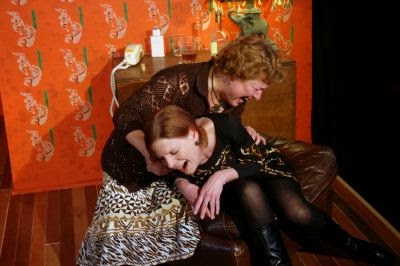 Director Torres treats the script as if it was the score of a symphony – the movements rising and falling yet increasing in tension and intensity. However, some of the blocking might be questioned. Often when the actors are stationary there are problems with line-of-sight, especially for those sitting house-right. Perhaps, given the size and configuration of the venue this was inevitable, as was Torres having his actors often deliver their lines with their backs to much of the audience. Such problems will hopefully be eliminated when MTC moves to its new, larger digs (130 seats) at the end of its season (you can view plans for the new site at www.musictheatreofct.com/newspace).

In this fully realized production, perhaps its most interesting aspect is the interaction of the characters as husbands turn on wives and vice-versa, as well as when allegiances shift and then shift again, all supporting one of Reza’s main themes: the costumes adults wear – maturity, sophistication, rationality – hide our need for ‘treats’ and, when we don’t get them, our willingness to bedevil each other with ‘tricks’ that often cut to the bone. Alas, Raza suggests, we are really all just little savages overseen by a god of carnage.