Building Bridges Across the Decades 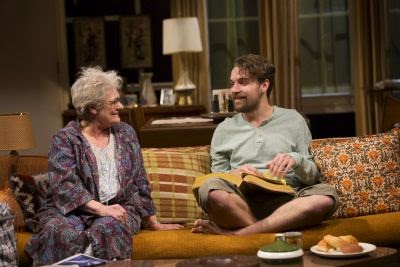 
And so…?
What?
In literary theory, before it went schizophrenic and feral, deconstructing itself in a rush towards irrelevancy, there was a concept called the “intentional fallacy,” which basically posited that the author’s intent is essentially irrelevant to understanding a work of literature. As two of the mavens of what was then called the New Criticism, W. K. Wimsatt and Monroe Beardsley, wrote in The Intentional Fallacy: “…the design or intention of the author is neither available nor desirable as a standard for judging the success of a work of literary art.”
Well, in the case of “4000 Miles,” a play by Amy Herzog that recently opened at Long Wharf Theatre under the direction of Eric Ting, the author’s intent is readily available in the program notes, but it is certainly not the standard to be used to judge the success of the production.
Referring to the Herzog interview in the program notes, we find the playwright saying that she was influenced by a cousin, a “transcendentalist, hippie,” who lost a friend in a rafting accident and was “suffering…a major loss.” She also references a grandmother and suggests that the elderly “can just disappear.” Further, she mentions riding cross-country on a bicycle after graduating from college, ending up in , and finding that “urban life was a difficult adjustment.” From all of this, and more, she crafted “4000 miles.” It remains to be seen whether her intentions have been fulfilled on the stage.
The “grandmother” is now Vera Joseph (Zoaunne LeRoy), a lady well up in years living in a rent-controlled apartment in . The “cousin” is now Leo Joseph Connell (Micah Stock), Vera’s grandson, who appears, ten-speed bicycle in tow, in Vera’s apartment after having dipped his bike’s rear tire in the Pacific Ocean and, following the tragic loss of his friend, Micah, on the bike ride east (Micah suffocated in mud when a truck hauling chickens overturned), wishes to complete the ritual by dipping the bike’s front tire in the Atlantic. Both characters carry much baggage. 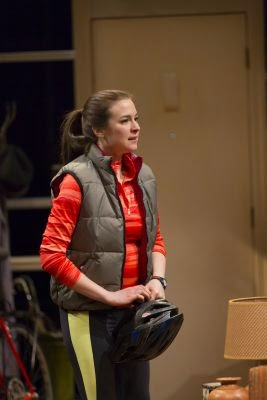 Baggage? Well, Leo once had a semi-erotic moment with his adopted sister Amanda, who is Asian, and the girl is now, reportedly, in therapy. Then there’s his relationship with his domineering mother, a woman Vera also has problems with. And then, of course, there’s the road death of Leo’s friend, Micah, overrun and smothered by a truck that, perhaps, is a metaphor for the capitalist system, which Vera, an avowed Marxist, has been (supposedly) fighting against all of her adult life. But Vera is old, forgets words, is lonely, and has a combative phone relationship with a female neighbor who is mere steps down the hall – they call each other every day just to make sure they still exist but never see each other. Then there’s Leo’s broken relationship with his girlfriend, Bec (Leah Karpel), also a resident whom he has apparently cheated on, an action for which she cannot forgive him, and Vera’s unhappy love life – only one man ever turned her on, a man to whom she was never married. There’s more, but why burden you.
What Herzog makes of all this seems quite less than the sum of its parts. The fact that Vera is a card-carrying member of the Communist Party is acknowledged, but really doesn’t impact on the relationship between her and her grandson. She could just as easily be an avowed Goldwater Republican for all politics really matters in this play.

The same can be said for Leo’s free-spirited hippie-ness. It seems superficial, a matter of words inserted into the script. What we basically have here with these two characters is a lonely old woman and a callow young man – their political or metaphysical leanings don’t really come into play.
That being said, this old woman and callow young man generate a lot of warmth and humor over the course of the play, and this has a lot to do with LeRoy’s performance, which is faultless. She gives the audience a woman who is fighting the ravages of age: well-know words float away when needed, checkbook, glasses and false teeth are misplaced, and an aching loneliness hovers. In the face of her inevitable dissolution and demise she is essentially undaunted, running her fingers through her hair in frustration at her failings yet marching ever onward. Several scenes near the end of the play, when Leo is threatening to leave, are especially poignant, for LeRoy’s character clearly wants him to stay yet pride stops her from begging.
As the aimless young man, Stock does extremely well in his scenes with Leroy. They generate a lovely chemistry that sheds a warm glow over the theater, though one might have asked that said relationship might have been a little harder won – Leo slips a little too easily into Vera’ hermetic life. His scenes with Karpel and Teresa Avia Lim, who plays an Asian girl Leo picks up on a date, are another matter, and that possibly has to do with the dialogue these two female characters are given to work with and how the actors who portray them have been directed by Ting.
Bec, the irate girlfriend, is something of a nag, and as played by Karpel is not very sympathetic. Although she may have been sinned against, there comes a point in the play, as Leo tries to win here back and she continues to admonish him for sins of commission and omission, that you just want to say, “Boy, give it up. There are other fish in the sea.”
As for Lim, who also provides the voice of Leo’s sister, Amanda, she has the unfortunate task of playing a one-trick-pony character or, in Lit-Crit parlance, a flat character, and Ting’s direction here doesn’t help matters: Lily (whom Leo dates, it is implied, because of her ethnicity – that is, a reminder of Leo’s sister – here Herzog toys with the incest theme but never really develops it) enters hot and ditzy and stays the same throughout. She has some good lines which she delivers with brio, but after she exits, and on reflection on the drive home, you can’t help but ask yourself, how did her character’s extended scene with Leo advance the play? Maybe there was more there than met my eye.
There were also several other head-scratching moments.
The first is a scene late in the play in which Leo reveals to Vera how his friend died when they were on their bike trip. As called for in the script, it is performed in near darkness, the stage illuminated by only two top lights up stage. In other words, you really can’t see the actors at this highly emotional moment. Some may find this moving, the darkness enhancing the emotional impact of Leo’s revelations; others may find it a bit frustrating, since we can’t see the actors faces and body language. Horses for courses I guess. And then, whatever emotion has developed throughout the scene is deflated by Herzog, who gives Vera a punch-line that draws a great deal of laughter but, to my mind, ruins the moment.
The other head-scratching moment is at the play’s conclusion. Vera delivers a line, the lights go out, and immediately some audience members started applauding. Well, both I and the lady who accompanied me had the same reaction: how did the clappers know the play was over? There had been several other blackouts and Vera’s last line does not scream “closure.” As a matter of fact, the line seems beside the point.
After ceasing to scratch my head, I have to admit that “4000 Miles” offers many enjoyable moments, and Leroy’s performance is certainly worth the price of admission, but you get the feeling that the play could have been so much more. It lacks an edge and clear conflict that makes you want to care. The evening is like a pleasant visit to well-known relatives – you nod and smile at their idiosyncrasies yet sense that there’s a whole lot more going on beneath the surface that you are not privy to.