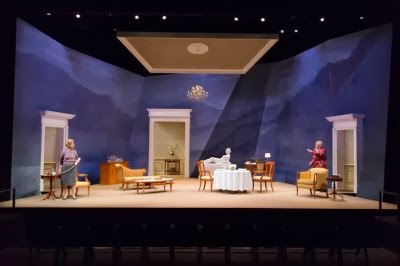 
It may well have been “The love that dare not speak its name,” as Lord Alfred Douglas so aptly phrased it in his poem, “Two Loves,” but, over the years, numerous poets, novelists and playwrights found creative ways to evoke that “name” without actually speaking it. Some critics may have called that dissimulation, but since, in at least, homosexuality was a criminal offense up until 1967, such subterfuge was a shield against both social and legal assault. However, the toll taken on spirit and soul by those who had to hide their proclivities was as great as the lengths to which they went to maintain a façade of “normalcy.”
Such is the driving force behind “A Song at Twilight,” Noel Coward’s last play now on the boards at Hartford Stage, directed by Mark Lamos, artistic director at the Westport Country Playhouse. The effort is both amusing (Coward was, among other things, the master of witty dialogue) and moving, though it is not without its flaws, minor though they may be.
As outlined in the program notes, Coward was inspired to pen “Twilight” after hearing an amusing anecdote told of Sir Max Beerbohm as well as the publication of W. Somerset Maugham’s memoir in which the author strove, through blame, innuendo and sheer hypocrisy, to maintain that façade of “normalcy,” in the process losing many friends who were well aware of Maugham’s true inclinations.
The one-act play is set in a private suite in a luxury hotel in Switzerland (more about Alexander Dodge’s set later), where renowned author Hugo Latymer (Brian Murray) and his wife Hilde (Mia Dillon) await the arrival of Carlotta Gray (Gordana Rashovich), a second-tier film actress and old flame of Latymer’s who has, many years after their affair ended, inexplicably requested an audience with the now aged, ailing author. 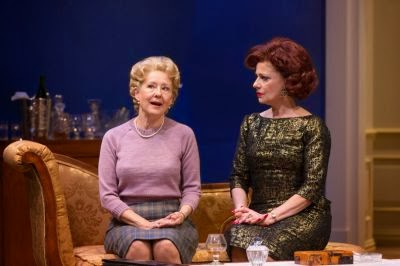 Felix (Nicholas Carriere), a waiter, brings the couple libations and after Hilde pours, she departs for dinner and a movie with a lesbian friend, leaving Latymer to confront Carlotta on his own. Upon Carlotta’s arrival, the two play a cat-and-mouse game about Carlotta’s intentions until it is revealed that the actress is in possession of two sets of letters, one old love letters from Latymer that she would like to publish in her autobiography; the other set is of a more incriminating sort. It is the possession of these letters and the memories, passions and betrayals they evoke, that take up the rest of the play, with Hilde returning to help drive the drama to its climax.
The play is a classic drawing room piece and as such the material draws attention to Dodge’s set (part representational, part presentational): a capacious open room with little art or decoration save for a reclining nude statue upstage that has been top-lit by lighting  designer Matthew Richards for emphasis. The ceiling is high and the walls seem to stretch out to infinity – it has more the feel of a catacomb or tomb than of a luxury hotel suite – the result being that the set’s furniture and the actors often seem dwarfed. This is especially true when the actors are standing extreme stage left and right – the distance between them seems immense. 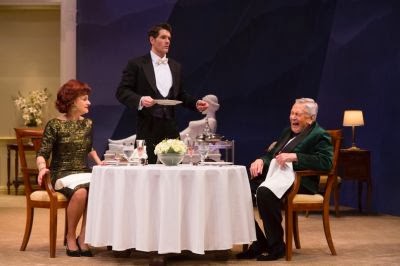 Dodge has given Lamos a lot of room to work with, and although the director does some nice, well-balanced blocking, often it seems the actors, especially in Scene One, are locked in place as they stand and deliver their lines (more movement could have enhanced the verbal and intellectual pas de deux going on between Latymer and Gray). It is at these moments that the set seems the most daunting. Its size, as well as the size of the house, also affects audibleness: the set sometimes seems to devour the actors’ words so that a mere cough from the audience masks the dialogue. This is especially true for many of ’s lines.
Dodge has also given Lamos a platform area high up and stage left where, at the close of each scene, two young male actors (Bryan Kopp and Paul Willis Jr.) stand nude behind a scrim (a theater drop that appears opaque when a scene is lighted in front and transparent or translucent when a scene is back-lit) miming intimacy. Although both scenes, staged very tastefully with haunting music by sound designer John Gromada, are meant to evoke Latymer’s memories, their necessity is debatable. Perhaps the actors on stage could just have easily (and more effectively) created the sense and import of those memories.
Set and some staging decisions aside, “Twilight” delivers many intriguing, entertaining moments. Murray, who is on-stage for almost the entire production, ably creates a man who, much like Maugham, has wrapped his life in lies and, in the process, driven away everyone but his wife of 20 years. He is, at different moments, irate, taunting, cajoling, irascible and disingenuous.
Although both Dillon and Rashovich seem a bit tentative at the start (at least at the Saturday matinee I attended – there may have been extenuating circumstances), both quickly warm to their parts, with Rashovich’s character giving as good as she gets from Latymer in their extended moments together, and Dillon lighting up the stage and engaging the audience in the second act, delightfully bringing her character to life, giving Hilde a depth not apparent in Scene One.
All in all, the well-constructed “Twilight” offers its audience an often amusing, thought-provoking 80-or-so minutes of theater. It is a classic example of why Coward achieved such fame, for it is, by and large, witty, elegant and sophisticated.