Capturing the Moment, However Horrific 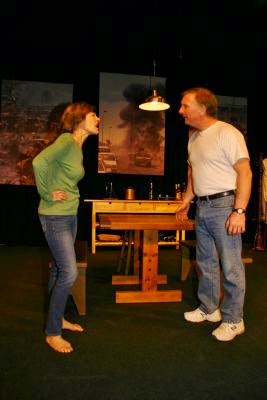 
Once again, ’s Square One Theatre Company proves that you don’t have to drive very far or pay exorbitant ticket price to enjoy great theater. The well appointed theater on is boarding “Time Stands Still,” a play by Pulitzer Prize winner Donald Margulies that was nominated for two Tony Awards. Under the capable direction of the Theatre’s artistic director, Tom Holehan, and sporting a stellar cast of faces familiar to Square One theatergoers, “Time Stands Still” is trenchant, contemporary theater that succeeds on multiple levels, the most important of which are audience emotional and intellectual satisfaction.
The play opens with James (David Victor) and Sarah (Janet Rathert) entering their loft in . They have been a couple for eight years, most of which has been spent covering one war-torn arena after another, for they are both journalists – he a print journalist, she a photo-journalist. Sarah wears a leg brace and bears facial wounds, for she is recovering from a roadside bomb explosion in Iraq; James’s scars are not as evident but run as deep, for while covering the same war he saw the effects of a terrorist attack, coming away with the blood of indigenous men, women and children on his face, hands and body.
Thus the stage is set for an exercise in what it means to be a couple and, equally important, what it means to be a journalist, someone who must stand and watch…and report…as humanity suffers. James thirsts for normalcy, which includes marriage to Sarah; Sarah is not so sure but is willing to give it a go. As role models, of a sort, for the couple, they have Richard (Pat Leo), an editor and friend, and Mandy (Alisson Wood), his latest paramour, a party planner who is, among other things, several decades younger than him. 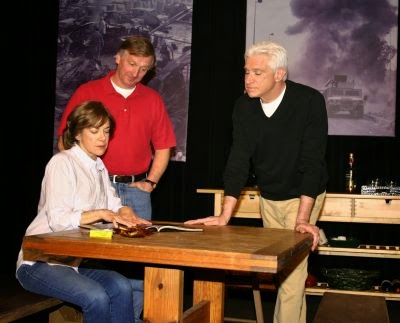 Over the course of the next 90 minutes or so, Margulies deftly delves into the moral issues inherent in James and Sarah’s profession as well as the nature of commitment between couples. In well conceived set pieces, the journalists move toward and then away from each other as the May-September relationship blossoms.
At intermission, the lady who accompanied me and I spoke about what we had seen so far. Of Rathert’s character my companion said: “You just can’t keep your eyes off her,” and that is so. Rathert’s Sarah is compelling, a mixture of fear, desire and determination. She gives the audience a woman who is conflicted yet holds to the belief that what she is doing has merit, that in a world of suffering and carnage someone must stand and be a witness.
Victor’s James is equally strong as he fights his own devils and seeks some sort of surcease and closure. The confrontation between the two late in the second act is both visceral and compelling as they attempt to find some common ground while holding fast to what they both want and need.
As a frame for the primary relationship in the play, Leo and Wood present a coupling that, at first glance, seems nothing more than that driven by an older man’s lust for a young woman, but Mandy is deeper than she seems, and Richard is more committed than it is first assumed, and the growth of this contrapuntal relationship stands in stark contrast to the trajectory of James and Sarah’s. 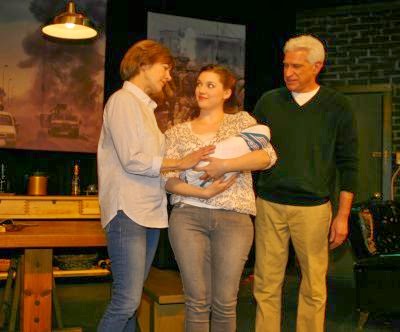 The decisions made by the four, especially those made by Sarah, are the stuff of post-theater discussion over cocktails or, in my case, the classroom, for a number of my students at Norwalk Community College accompanied me to the show. The following day, in class, one of the students who had attended tried to explain his response to what he had seen as the play had unfolded, and heard from the actors, director and Kimberly Krol, the stage manager, who were all gracious enough to participate in a talk-back with my students after the performance.
“I just…I wanted them (referring to the characters) to be my friends,” he said. “I wanted to know them.” Then he thought for a moment and said, “When it was all over (meaning the talk-back), I went up and hugged them all.”
I don’t know if he did or not – didn’t see it – but I understand the emotion. This quartet of actors created moments that will live in my students’ minds forever, and that, perhaps, is what theater is most about, and if he did do what he claimed he did, well, for the actors, it must have been worth any number of standing ovations.


“Time Stands Still” runs through March 15. For tickets or more information call 203-713-6626 or go to www.squareonetheatre.com
Posted by Geary Danihy at 6:55 PM