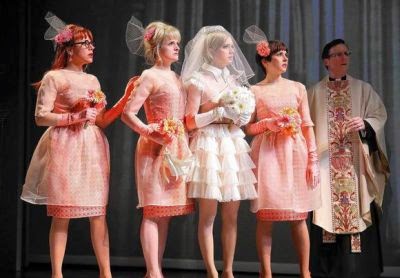 Ceci Fernandez as Frida, Keira Naughton as Ulcie, Ariana Venturi
as Higgy, Jeanine Serralles as Bea and Brad Heberlee as the priest.
All photos by by Joan Marcus.


Zounds and Egad! The cheek of it all.
There certainly will be much ado in some hidebound quarters over the current goings-on at Yale Repertory’s University Theatre. Some might even be moved to say, “We are not amused.” However, they would be missing the point of “These Paper Bullets!” as well as denying the reality of how Shakespeare’s plays were originally performed, for the Bard knew well that he had to please the groundlings, of whom he wrote in “Hamlet”: “for the most part…[they are] capable of nothing but / inexplicable dumbshows and noise.” Well, the groundlings would be well pleased with what is billed as “A Modish Ripoff of William Shakespeare’s Much Ado About Nothing,” for there’s enough noise and dumbshows to please the most base born…plus quite a lot to tickle the fancy of the carriage trade.
As adapted by Rolin Jones, “Bullets!” follows the basic plot line of Shakespeare’s play, thought to be written in 1599. The Bard gave us two couples, Benedick and Beatrice (the main couple), and Claudio and Hero (the secondary couple), each thwarted in finding true love – the former for prickly personality reasons, the latter due to the jealousy of Don John -- with all of the action taking place in Messina. Flash-forward some three-and-a-half centuries to and we find a merry group of young men freshly returned from conquering the most important part of the known world. They are “The Quartos,” a mop-headed quartet of rockers who, under the tutelage of their manager, Anton (James Lloyd Reynolds), makes young girls faint and young men envious to the point of affecting the quartet’s style of dress, cheeky manner and monkish locks. 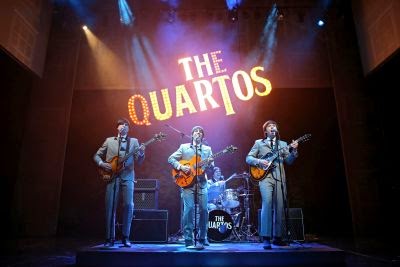 The Quartos: Bryan Fenkart as Claude, Lucas Papaelias
as Balth, James Barry as Pedro (on drums), and David
Wilson Barnes as Ben

Britain’s younger generation is delighted, especially with the raised skirts and lowered morals that the 60s have ushered in; the old guard, in the form of a cadre of inspectors from Scotland Yard, suspect that the very fabric of the Empire, or what tattered parts remain, is about to be torn apart.
Ah, but beneath the gleeful, glittery, circus-like atmosphere of the fab four’s lives there lurk problems, for Ben (David Wilson Barnes), though not bereft of birds, is beset and bedeviled by Bea (Jeanine Serrales), a top designer of mod clothing who has a waspish tongue and disdain both marriage and men.
More obviously smitten is another Quarto member, Claude (Bryan Fenkart), who has fallen for the daughter of Leo, a hotelier who has agreed to house the lads in his hotel. Said daughter, Higgy (Ariana Venturi), one of Bea’s models, is equally smitten with Claude and they quickly plight their troth and set a wedding date, sending the media into a feeding frenzy, with BBC correspondent Paulina Noble (Liz Wisan) leading the pack of piranhas, filming daily, if not hourly, pretentious reports on all of the doings.
But there is a snake in the grass in the form of Don Best (Adam O’Byrne), the group’s former drummer, who with the help of Boris (Andrew Musselman), a tabloid journalist, and Colin (Brian McManamon), a fey paparazzo, plots to destroy the romance by using doctored photographs of Higgy frolicking sans clothes on the eve of her wedding. Incensed at the pictorial revelation, Claude assails Higgy at the altar, sending his bride-to-be off to cry her eyes out in the loo.
Will true love be thwarted? Not if the good men and true of Scotland Yard have anything to say about it, for Mr. (Greg Stuhr), Mr. Urges (Brad Heberlee) Mr. Coal (Anthony Manna) and Mr. Cake (Jabari Brisport) are on the case, sort of, and will see that justice triumphs and all will be well and truly wed as they wouldst be.
As directed by Jackson Gay, with Beatle-like songs by Billie Joe Armstrong, this romp through Shakespeare land is a delight from just about start to finish. The audience may need a few minutes to adjust to the accents and metrics, but once the ear is accustomed to all of the iambs, things move along swimmingly, with Serralles and Barnes setting the pace as their characters verbally joust and bicker. 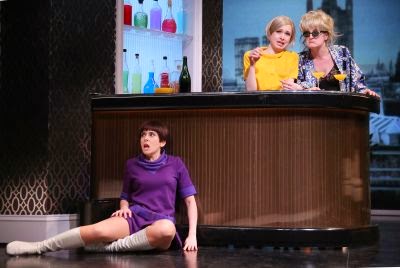 Jeanine Serralles as Bea, Ariana Venturi as Higgy,
and Keira Naughton as Ulcie.

Performances are, across the board, outstanding, with Serralles showing a deft knack for physical comedy. A scene in which she must hide as her entourage discusses Ben’s supposed enduring love for her is a comic gem worthy of Buster Keaton or Charlie Chaplin complete with a balky dress-form mannequin, a bear rug, a vomit-slick floor and, believe it or not, a used condom (the groundlings would have loved it). Taking part in this discussion is Higgie, Frida (Ceci Fernandez), and Ulcie (Kiera Naughton), and Ulcie, hooked on booze, drugs and sex with big men, gets all of the best lines, which Naughton delivers with delightful nastiness – at one point she suggests to Higgy that it would probably be best if she gave birth to a retarded child since you can put him or her in a corner with a spatula and the child will be amused for hours – that kind of nastiness. 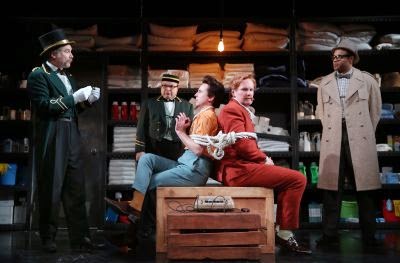 Then there are the intrepid men of Scotland Yard, led by the pompous and clueless Mr. . Their extended scene in the second act as they interrogate Boris and Colin is filled with witty badinage that devolves into slapstick involving a syringe filled with a sleep-inducing serum. Listen closely during this free-for-all for some lines purloined from other of The Bard’s plays, namely “Romeo and Juliet” and “Richard III.”
With dead-on costumes by Jessica Ford, mood-enhancing lighting by Paul Whitaker and multiple, evocative sets by Michael Yeargan, “These Paper Bullets!” pleases the eye as much as the ear…and the funny bone, especially if you were around when the Fab Four were gaining their fame. If you were, then you’ll pick up on many of the allusions Jones has filled his script with…without needing much Help! And if you weren’t, you’ll still enjoy the madcap mayhem.