Blimey! It's the Bloody Brits

Shout!-- The Ivoryton Playhouse -- Thru April 5 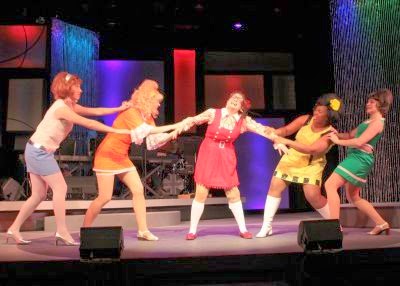 
Sad that spring hasn’t sprung? Got a bad case of the blue meanies? Well, you can either wash down your vitamin D pills with a dram of Jack Daniels or you can get yourself out to the Ivoryton Playhouse for a shot of “Shout! The Mod Musical.” The show may not make the crocuses bloom but it will certainly put a smile on your face and get your toes a-tapping, especially if you remember Dusty Springfield, Petula Clark, Lulu and Marianne Faithfull.

Created by Phillip George and David Lowenstein and directed by the Playhouse’s Jacqueline Hubbard, “Shout!” takes you back to the 60s and early 70s, a time when swung “like a pendulum do.” and , mini-skirts and go-go boots, the Greasers and the Mods…and the music. It’s all delightfully captured in this revue that features five talented actresses covering 30 songs that, for many, will bring back fond (if sometimes foggy) memories. 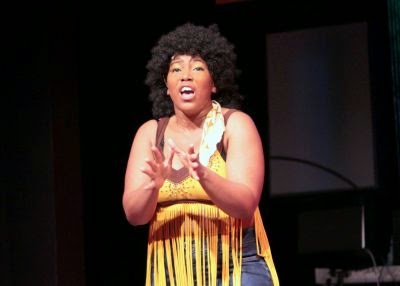 There’s a double frame for the show: articles from the hip magazine “Shout” (read by Steve Phelan) that embrace the “philosophy” of the era as well as everything that was au courant, and an advice column written by Gwendolyn Holmes (Beverly Taylor) that offers advice that is the antithesis of the “let it all hang out” message “Shout” delivers.

The five young ladies alternately scan the pages of the magazine for advice about men, fashion and sex while, when confronted with one or more of life’s problems, write to Gwendolyn for advice, the variant messages capturing the ambiguity of the times as the drab post-war era, and its morals, styles (or lack of same) and inhibitions, slowly gave way to an era of color, light and, some might say, noise and anarchy. 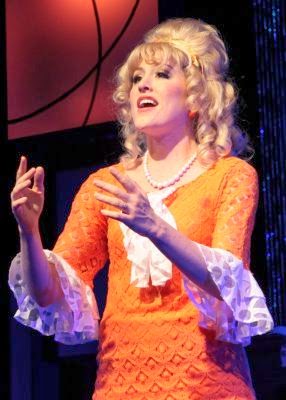 The feverish, frisky, fraught girls are, as written, stereotypes, but the actresses taking on the roles quickly fill out their characters and make them come alive. There’s the Blue Girl (Jennifer Lorae) who knows what answer the mirror will give when she asks who’s the fairest of them all, and is on the make for a the perfect man (i.e., one with rich parents). Then there’s the Yellow Girl (Tamala Baldwin), an American ex-pat who longs for just a glimpse of Paul (Who’s Paul? Well, he was the cute one – it’s Ringo who takes out the garbage). The Orange Girl (Mikah Horn) yearns for blissful domesticity, or at least she thinks she does, while the Green Girl (Monica Bradley) yearns for a good shag. Finally there’s the Red Girl (Bethany Fitzgerald), the one with glasses, pimples and a sign pinned on her back that says “Socially Inept!” 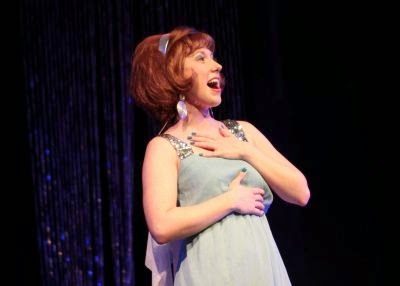 With a tiered set by Daniel Nischan, a vibrant lighting design by Marcus Abbott, and dead-on costumes by Kari Crowther, the venerable Playhouse shimmers, shakes and shines as the quintet moves seamlessly from number to number, all choreographed with a good eye for period moves and dance steps by Caitlin Sailer and backed up by two keyboards (Kyle Norris and Melanie Guerin), a bass (Dominic DeMonico) and percussion (Marty Wirt).

Each of the actresses is given numerous moments to strut her stuff and develop her character – of special note is Bradley’s monologue about her character’s relationship with her boyfriend and Fitzgerald’s rendition of her character’s shot at stardom – singing Lulu’s “To Sir With Love” at an amateur night contest – all in an effort to get her boyfriend to fondle her. 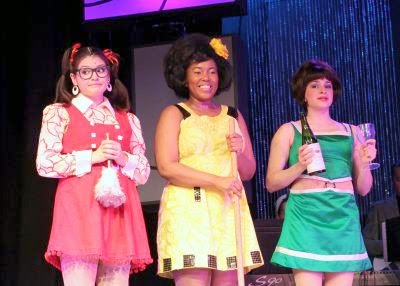 However, it’s the ensemble work that drives the show, and it is excellent. Taking on such diverse numbers as “Downtown,” “Don’t Sleep in the Subway,” “Georgy Girl” and Windy,” which segues into “Who Am I,” “Round Every Corner,” and, of course, “Shout,” the music just keeps on coming at you, eventually warming the chilliest of hearts. The wittiest set-up starts with the girls testing out their new-found proto-feminism by actually saying words that polite society shunned, including “vagina,” the repetition of which leads to “Cold Finger,” a take-off on “Goldfinger” complete with choreography that evokes the opening sequences of the Bond movies. It’s deftly done and a delight.

The roses may still be hibernating and the gladioli unsure of their welcome, but if you grab a seat at the Ivoryton Playhouse you will, for at least two hours, forget that robins are still wearing parkas and bask in the sunshine of “Shout!” Yes, those were the days, and if you remember them, or want to experience them for the first time, there’s no better place to go than the Ivoryton Playhouse.

“Shout!” runs through April 6 (surely by then it will be spring). For tickets or more information call 860-767-7318 or go to www.ivorytonplayhouse.org
Posted by Geary Danihy at 1:53 PM