Pygmalion Revisited -- With a Twist

Higgins in Harlem -- Playhouse on Park -- Thru March 23 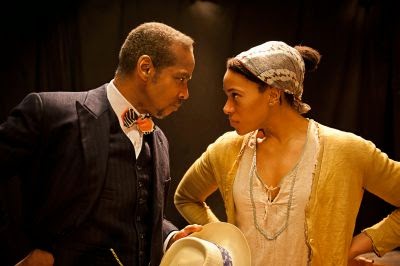 Kevyn Morrow and Geri-Nikole Love. All photos by Rich Wagner


An after-theater crowd has gathered in the rain in hopes of catching a taxi. Mrs. Hill and her daughter Clara stand with newspapers over their heads as brother Freddie rushes off in search of transportation, inadvertently bumping into a flower-girl, Eliza, sending her flowers into the mud. As she protests in florid street argot, a man stands in the shadows writing down her words. She thinks he’s a policeman and protests that she’s a good girl, turning to a gentleman named for support.
Sound familiar?
Well, it should. Yes, it’s “Pygmalion” or, more familiarly, “My Fair Lady,” but…it’s not, for the rain-swept folks are not standing outside ’s Church in Covent Garden, they are standing outside the Apollo Theater, and the setting is not circa 1912 but , 1938. Welcome to “Higgins in Harlem,” an intriguing play written (or, rather, adapted) and directed by Lawrence Thelen enjoying its world premiere at Playhouse on Park in .
There have been many iterations of the story of the Greek mythological character, Pygmalion, who fell in love with one of his statues only to have it come alive as Galatea. Until the appearance of Lerner and Loewe’s musical, “My Fair Lady,” George Bernard Shaw’s play was perhaps the most successful and well known of these tellings. The story itself captivates, for it deals with need, desire, hope and, in the case of Galatea – or Eliza – the triumph of the human spirit when unleashed from the bonds of poverty and ignorance. In Shaw’s hands, it was also a strong indictment of Victorian society, with its caste system as rigid, if not as visible, as that of ’s. 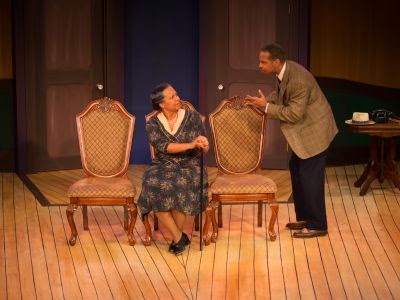 Janelle A. Robinson and Kevyn Morrow.

Thelen has kept the basics: Henry Higgins (Kevyn Morrow) is still an expert in phonetics and Pickering (Bob Johnson) still a published author on dialects, although now it is African dialects, and Eliza Doolittle (Geri-Nikole Love) is still selling flowers, although with a sassiness absent in the original. Her father, Alfred (Jeffrey Cousar) still seeks to profit from whatever arrangement Higgins and Pickering have made with his daughter, caring little about the actual nature of that arrangement.
The plot, as well, remains the same – Higgins takes on Eliza as a pupil for six months, at the end of which he will present her as a princess – this time an African princess -- at a gala at the . If the ruse is not uncovered, Higgins wins a bet he has made with . In the process, as Eliza transforms from “gutter snipe” to polished young woman, the lady is dissed and dominated by Higgins, who is blunt, pompous and overbearing to a fault. In the end…well, a little about the end later.
The underlying premise in Thelen’s adaptation is that, as in Victorian England, there were various social castes in Harlem during and after what has been termed the Harlem Renaissance – well established, well-to-do families and, well, the “trash,” which consisted of the blacks who had migrated north but had yet to assimilate. In essence, Higgins, his mother, Mrs. Higgins (Janelle A. Robinson), Pickering, the Hill family, (Aurelia Clunie, Vanessa Butler and Joshua Ramos) and Higgins’ housekeeper, Mrs. Pearce (Xenia Gray) are just like white folks, only with darker skins. Or, rather, they mime the attitudes, mores, etiquette and speech patterns of the whites, but this idea, and the underlying prejudice inherent in one’s degree of “color” imparting status within the black community, Thelen opts not to deal with. 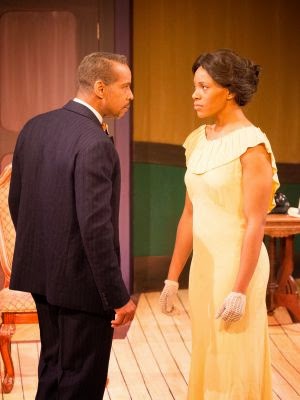 In addition, in a play set in 1938 in one would expect some acknowledgement that there is racial tension prevalent, but that too is absent. The characters seem to live in a vacuum or beneath a protective dome – “Whitey” simply doesn’t enter into the picture. The premise of the adaptation is intriguing, but Thelen simply doesn’t take advantage of the myriad possibilities.
That being said, “Higgins in ” still offers pleasures; chief among them is Love’s Eliza. As the unrefined flower girl she is all bristle and false bravado – she taunts to hide her tentativeness…and tenderness, her body language saying as much as her dialogue. Her transformation into a sophisticated young lady, in both speech and demeanor, is a delight to watch. Of special note is the verbal training breakthrough scene, the “Rain in …” scene which, in Thelen’s adaptation, becomes the “Take the A Train” scene. As she struggles to pronounce the long A you inch forward in your seat, urging her on, falling back as she fails, and then sitting forward again as she succeeds.
Of equal pleasure is her coming-out scene in Mrs. Higgins’ parlor, where she converses with the Hill family, with topics limited initially to her health and the weather but, eventually, embracing her family’s gin-soaked history. It’s a delightful, comic moment that Love pulls off with aplomb.
Playing against her, Morrow gives the audience a perfect Higgins, blind to his failings and comfortable with his philosophy that he should treat all people, be they beggars or kings, as equally beneath him and worthy of his disdain. He is gruff, abusive and totally self-absorbed, and yet, Morrow is able to convey the need beneath the procrustean surface, especially in the scene when Eliza announces that she is leaving. He blusters, he commands, he cajoles, he demands and demeans – all to no effect -- and while his mouth is spewing threats and disdainful comments, his eyes and body language convey an entirely different set of emotions.
Of equal merit is Robinson’s portrayal of Henry’s mother. Her character is wise and forbearing, with just a touch of sauciness. Her extended monologue in Act Two regarding the needs of a young woman – specifically Eliza’s needs – was especially moving, as was Gray’s mothering of Eliza as Higgins’ housekeeper and her acerbic comments about her employer’s manner of dressing and use of profanities. 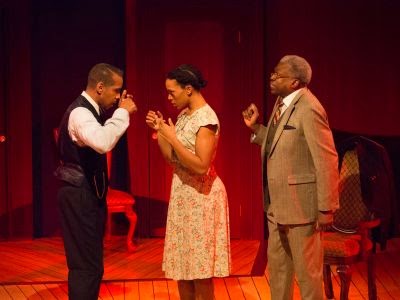 One might have asked for a bit more bluster and animation in Johnson’s portrayal of Pickering, and a little less animation from Cousar as Eliza’s father, although the audience the night I saw the show responded favorably to his over-the-top portrayal of the pragmatic chimney sweep, especially when, in Act Two, he appears in a Zoot Suit complete with a fedora sporting a yellow feather and a watch chain hanging down nearly to his ankles. Yes, a bit over-animated, but his diatribe about the ills inherent in entering the middle-class went over extremely well.
And now…to the final moment of the play. Shaw was adamant that it should be played as written, but as soon as “Pygmalion” was boarded there was dissension amongst critics, the audience and the actors. Shaw wrote variations on the ending, though never yielding in his belief that Eliza, once having won her freedom and independence, can never return to, or place herself under the thumb of, the insufferable Higgins. Of course, Lerner and Loewe, (as others had done before them) succumbed to the “happy-ending” demand in their musical and the subsequent film.
Thelen sides with Shaw, but there is something anti-climactic in his play’s final moment. Eliza has left and Higgins, his face a screen upon which conflicting emotions are playing out, crosses upstage as chairs are repositioned. He stands beneath the light of a special, then sits, picks up a book and…
Well, I must assume that most people in the audience are more familiar with “My Fair Lady”…and its final moment…than with Shaw’s original. Thus, there are expectations that have to be dealt with…and aren’t. The final blackout left the audience silent – they were waiting for…more…and these expectations were enhanced by the fact that a door stage left is opened in the play’s final moment, which seems to presage Eliza’s return. In fact, it is done to facilitate Morrow’s exit in the dark (which could be accomplished equally well by a small piece of fluorescent tape placed on the floor), but it sends a different message. What seems to be called for here is a final, brief exclamation from Morrow as Higgins, perhaps of grief, perhaps suggesting a dawning awareness of what he has lost…maybe Higgins simply speaking Eliza’s name in a wistful, needful manner…and a bit of business with the book in his hands. Slamming it shut? Allowing it to fall from his hands? In essence, closure.
In any event, “Higgins in ” is an entertaining hybrid. It could have been more than it is, but what it is satisfies.