A Journey Into The Unknown

The Other Place -- Hartford TheaterWorks -- Thru April 19 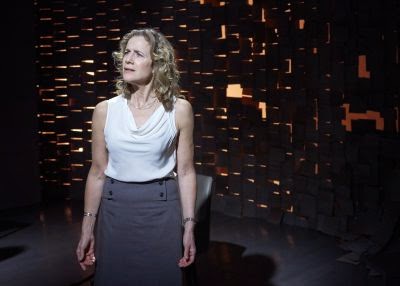 
How tenuous are the moorings that keep us safely in sanity’s harbor. How frightening are the moments when you must watch someone you love slip those moorings and slowly yet inevitably drift out into a cold, dark sea, to depart for that other place, a place where there be dragons of dementia. Yet, how fascinating…and riveting…it can be to watch stellar actors working with a well-written -- at times lyrical -- script, as they bring to life characters who are going through such agony. Such is the case with Sharr White’s “The Other Place,” which recently opened at Hartford TheaterWorks under the insightful direction of TheaterWorks’ producing artistic director Rob Ruggiero.
This production of “The Other Place” (the play was seen off-Broadway [2011], and then on Broadway, [2013]) was first boarded at the Repertory Theatre of St. Louis, where it ran for three weeks earlier this year. After a brief hiatus, Ruggiero brought the cast east and did some re-staging to accommodate the TheaterWorks stage and its intimate confines. The venue’s intimacy means, in this case, that there is simply no place to hide from the emotional roller-coaster ride that goes on over the play’s 80-plus minutes, and there is no reason to hide, for this is theater that approaches, in its own way, Greek tragedy, with more than a little humor thrown in for good measure. 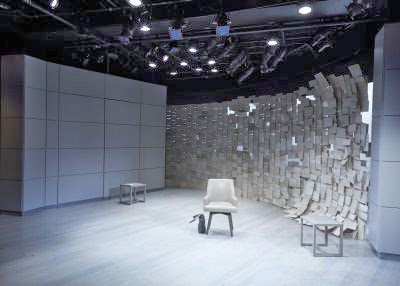 Set by Luke Hegel-Cantarella
For most of the play the set, by TheaterWorks veteran Luke Hegel-Cantarella, consists of little more than two small tables and a chair, backed by a pale blue wall stage right and, running up-stage-center to stage left, what looks like weathered shakes that might be used to side a house, say, on Cape Cod – but the siding is more than weathered, for many of the shakes have fallen off and rest in haphazard piles on the ground, a striking visual metaphor for several of the play’s central themes.
All is well in place, however, as the play opens, for Dr. Julian Smithton (Kate Levy), an expert in the study of and research on various types of dementia, is making a presentation to doctors at a Big-Pharma sponsored conference, touting the wonders of a new drug she has created that will hopefully reverse the effects of a certain type of dementia. Confident and just a tad acerbic, the 52-year-old Smithton explains how the drug was developed and what she hopes will be its financial success. All too soon, however, her presentation falters, if for no other reason than she see’s a beautiful young woman clad only in a yellow bikini sitting amongst the doctors. She bridles and makes cutting remarks, yet is troubled at the same time. Why is she fixated on this young woman? Why this urge to verbally attack her?
What follows is the unfolding of Smithton’s story – her relationship with her oncologist husband, Ian (R. Ward Duffy), their daughter, Smithton’s doctor (both played by Amelia McClain), her daughter’s ‘husband’ (Clark Carmichael) – as she struggles to deal with the possibility that she has a brain tumor, with the possibility that her husband is divorcing her, with the possibility that her estranged daughter is making attempts to heal their rift, with the possibility that…well, there are many possibilities.
Central to this unfolding…or unraveling…is Smithton herself and, as portrayed by Levy, who is onstage for the entire play, she is a complex, intelligent, haunted woman who is struggling to understand what is happening around her, what is happening to her, and how the two might relate. In scene after scene, through multiple time and location shifts, Levy is absolutely mesmerizing, giving a pitch-perfect performance that speaks to the mind, the heart and the soul. Whether she is making a scientific presentation, arguing with her husband, bandying words with her doctor or searching her soul, and her mind, for some understanding of who she was, is and might be becoming, Levy’s character is agonizingly real and, for the audience, emotionally enveloping. So much so that when, in the play’s penultimate moments, Smithton finds herself in ‘the other place’ and must confront reality, you find that you have to unclench your hands and slowly exhale once the scene ends. 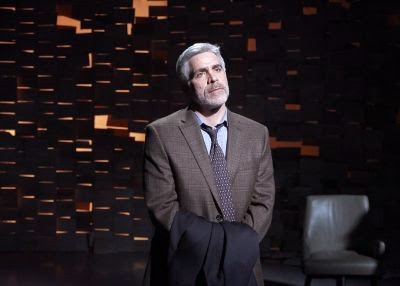 R. Ward Duffy
Duffy does an equally strong job as Juliana’s husband, for Ian bears a heavy burden, and Duffy gives this man a dignity, a conscience and a palpable sense of what it truly mean to say you love someone and then act on that emotion because it actually carries weight. As his wife begins her slow dissolution, Duffy’s character must balance contending emotions: rage, fear, deep concern and, above all else, frustration. He does all of this with grace and aplomb. 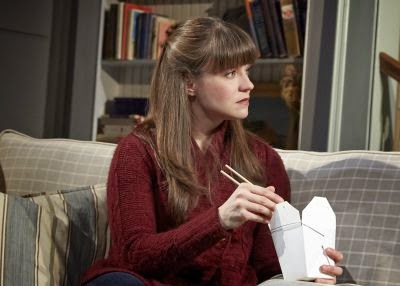 Amelia McClain
Perhaps the actor with the most difficult role, or roles, to cover is McClain, for she must play a daughter, a doctor and a housewife who comes in contact with Juliana in a rather intrusive manner. Although there are thematic and metaphorical reasons for casting the same person in all three roles, the decision may lead to some confusion and perhaps even a lessening of certain scenes’ emotional impact. This is especially true in the latter part of the play for reasons that can’t be revealed lest I be labeled a spoiler. Suffice it to say, as powerful as these moments are I couldn’t help but wonder if their emotional impact might have been enhanced if a different casting decision had been made.
On the production side, in addition to Hegel-Cantarella’s thoughtful set, which “blossoms” near the end of the play, given the somewhat stark nature of the background in front of which the play unfolds, and the necessity for multiple shifts of scene, much of the “setting” relies on the creative work of lighting designer John Lasiter and the video and projection designs of William Cusick who, among other effects, creates a visual coda that is, at the same time, moving and chilling, which is appropriate, since the play itself embodies these emotions, and yet does so without being grim. Playwright White knows when a joke works, and that humor, be it sarcastic or ironic, reveals as much about the human psyche as do the more touted and psychologically fraught characteristics we often use to define who we are…or talk to our shrinks about. In fact, one of the play’s most emotionally fraught scenes ends with a totally unexpected one-liner that is funny, insightful and, believe it or not, central to the play’s resolution and completion of character development. Smart writing.

If you are a thinking, empathetic human being, then from the moment Levy appears on the stage until she finally turns to stare at a haunting image from her past, you will be absorbed by “The Other Place.” Yes, I know it is a cliché to say so, but this is truly gripping theater.
“The Other Place” runs through April 19. For tickets or more information call 860-527-7838 or go to www.theaterworkshartford.org.