By Shadows We Shall Be Taught

"The Shadow of the Hummingbird" -- Long Wharf Theatre -- Thru April 27 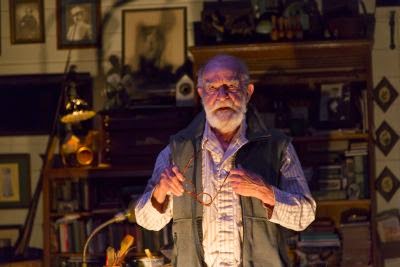 
An old, somewhat cantankerous man wanders about a room beset by shadows from the past. He thumbs through journals he has kept for decades. Nothing but shadows. The one bright light in his rather drear days is his grandson, who visits him on a regular basis. The grandfather imparts wisdom, the grandson struggles to understand. Finally it is a shadow, “The Shadow of a Hummingbird,” that unites them. Such is the plot of Athol Fugard’s somewhat lightweight play receiving its world premiere at Long Wharf Theatre.

Directed by Gordon Edelstein, the theater’s artistic director, and starring the playwright himself, “Hummingbird” has the feel of a short story. It runs slightly under an hour, and a good chunk of that is taken up by Fugard’s character, Oupa, reading from said journals, this material written by Paula Fourie using extracts from Fugard’s unpublished journals. This padding – for that is what it is – seems to go on for just a bit too long, primarily because there doesn’t seem to be a connection between what Oupa reads as he samples jottings made over the decades. The play’s first five or 10 minutes has more the feel of a reading by an author dipping into his selected works, the tone being set by the first “reading,” which consists primarily of a very long list of birds – 29 to be exact – that Oupa sighted over two summers some 25 years ago. The point? Not sure. 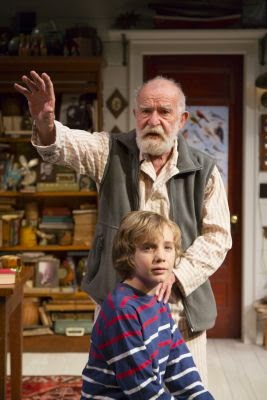 Whatever dramatic tension the play contains is generated by the relationship between Oupa and his 10-year-old grandson, Boba, played alternately by Aidan and Dermot McMillan. The boy visits his grandfather despite the wishes of Boba’s father (Oupa’s son who, Oupa firmly believes, is an idiot). It is during one of these visits that the grandfather attempts to instruct his grandson about illusion and reality through use of Plato’s allegory of the cave. The boy doesn’t think much of the story and after a bit of a sulk, Oupa grudgingly agrees with him. However, the lesson is not over, for Oupa shifts gears and turns to William Blake, quoting the first four lines of the poet’s “To See Wonder…” to hopefully enlighten the boy (and remind himself) about the nature of innocence and the price one pays when it is lost.

The lessons taught, and the interaction between the generations, is pleasant enough to watch, though it all leads to a somewhat inevitable conclusion. Fugard gives the audience an engaging, somewhat Brechtian, Oupa, a proud man battling against the ravages of time, and interacts well with McMillan. However, one can’t help but wonder why Long Wharf, which admittedly has a long relationship with Fugard, decided to produce this rather slight effort by a playwright who has given the world such multi-dimensional, emotionally charged dramas as “Sizwe Bansi is Dead” and “’Master Harold’…and the Boys.” “Hummingbird” is pleasant enough, but there’s not much there to chew on and what there is seems, at moments, a bit didactic.

The primary point of interest in this production of “Hummingbird” is the opportunity to see a playwright bring his own words to life. The old legal warning – “Never try to be your own lawyer” – does not here apply. Fugard ably proves that you can be the star of your own play.