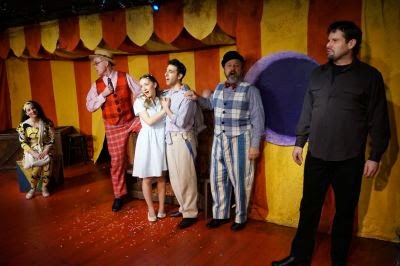 Over five decades ago, a musical with a limited number of characters and a minimal set opened off-Broadway at the tiny Sullivan Street Playhouse. It ran for 17,162 performances, becoming the longest-running musical in American theater history. The show was “The Fantasticks,” with music by Harvey Schmidt and book and lyrics by Tom Jones, and it now can be seen in a touching, oh-so-intimate production at ’s MTC MainStage. It is the venue’s last production before MTC moves to a more commodious location minutes away.

The musical’s draw is its allegorical simplicity: a boy, Matt (Jacob Helmer), lives next door to a girl, Luisa (Carissa Massaro). Their fathers, Bellomy (Jack Doyle) and Hucklebee (Lou Ursone), feign a feud, complete with a wall between their properties, in a bit of reverse psychology, seeking to foster an alliance between their children by seeming to frustrate it. As the musical opens, the children are ripe for romance, at least the story-book version, and so the fathers contrive an abduction of Luisa so that Matt can save her and thus bring their courtship to fruition. They enlist a bandit, El Gallo (Tony Lawson) to orchestrate the abduction, and he, in turn, calls upon an aging, line-challenged actor, Henry (John Flaherty) and a faux-Indian, Mortimer (Jim Schilling), who specializes in artless death scenes, to pull off the staged abduction and rescue. The first act ends beneath a cardboard moon with love triumphant.

The moon sets, the sun rises, and with it comes harsh reality and doubts. The romance is off. Matt sets out to see the world while Luisa becomes enamored of El Gallo. Life must teach the two young people some harsh lessons before they again find each other and, sadder but wiser, realize where their hearts belong.

The musical is loosely based on Edmond Rostand’s “Les Romanesques,” but it also harkens back to medieval drama, when troupes of traveling actors went from town to town putting on plays initially based on liturgical themes -- the mystery, miracle and morality plays – and then broadening the topics to embrace local folklore in the form of Morris dances. Various productions of “The Fantasticks” emphasize – or de-emphasize – the traveling show aspect of the musical – ’s staging of the show several years ago was heavy on magic and the sense of carnival. MTC’s offering, under the direction of its executive artistic director, Kevin Connors, gives a nod to the musical’s roots, with the Mute (Shanna Ossi) dressed in a quasi-Harlequin costume and the players posing and miming at the show’s opening, but this aspect of the show – a sense of magic and mystery – is minimal, perhaps because of the proximity of audience to cast.

Although there is a difference between physical and aesthetic distance, the former cannot help but influence the latter, and in the case of MTC, distance, or lack of same, between actors and playgoers makes it difficult to create an illusory landscape – what’s there is, well, right there in front of you, sometimes mere inches away. 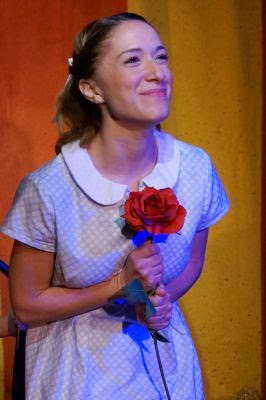 That being said, there’s a lot to like about MTC’s “Fantasticks,” starting with Massaro’s Luisa. She gives, as one of my students suggested after the show, an quality to the role, a subtle performance that displays the full range of her character’s emotions using deft gestures and well-controlled body language. It is here that MTC’s limited space works to its benefit, allowing actors to convey emotions as if they were being filmed (in constant close-ups) rather than having to play to the balcony. Massaro’s dulcet voice and engaging personality gives Luisa a truly girlish glee that is worth the price of admission, especially since, unlike some actors who find MTC’s limited space daunting and thus focus on anything other than the audience, Massaro, whether she is singing or delivering lines, looks her audience in the eyes. The effect is often riveting.

As the two fathers, Doyle and Ursone work well together, especially in the comic number, “Plant a Radish,” which is artfully choreographed by Kathy Callahan, who does a wonderful job with the space she’s given to work with (especially since the small set is ringed with blue footlights). Doyle and Ursone both walk the thin line between straight performance and farce, offering the audience both realistic moments of care and concern for their children and subtle buffoonery. 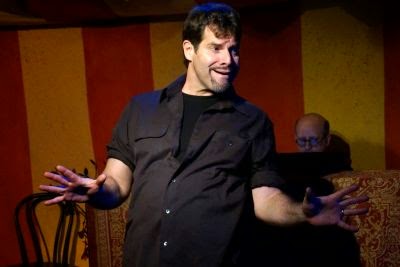 Lawson’s El Gallo is both suave and world-weary, a nice mix that the actor conveys with restraint, and again, Callahan’s choreography serves the cast well in the “’Round and ‘Round” number in which Lawson and Massaro whirl about, using the entire stage. 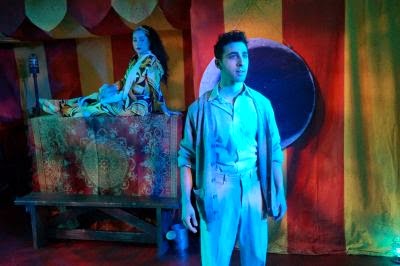 As the love interest, Heimer gives a workmanlike performance, although you never sense he is truly smitten with the girl next door: his passion is a bit restrained – the “Soon It’s Gonna Rain” number is thus vanilla rather than strawberry parfait -- and his suffering in the second act is just a bit too low-key. Low-key, however, cannot be said of Schilling and Flaherty, who ride their characters for all they are worth. Special kudos to Flaherty, who stepped into the role of Henry with just a day’s notice.

And then there’s The Mute, also known as “the wall,” the character who speaks nary a line throughout the entire performance. One might think this a thankless role, but Ossi is an enchanting presence on stage, often speaking volumes with her eyes. Using body language, Ossi’s mute speaks quite clearly – and endearingly.

MTC’s “The Fantasticks” is a smile-filled two hours of theater. Though the material is closing in on being eligible for Social Security, it is actually timeless, for children will always rebel, parents will always meddle, and the young will always have to pass through the alembic of life to learn what…and who…really matters.

“The Fantasticks” runs through May 4. For tickets or more information call 203-454-3883 or go to www.musictheatreofct.com
Posted by Geary Danihy at 6:39 PM