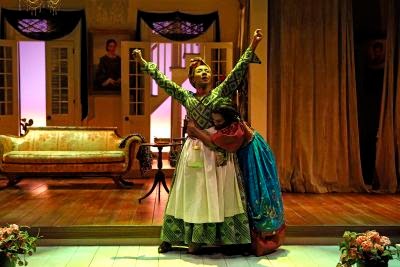 Most of the time, theater-goers browse through the program merely to fill time before the performance and during intermission, but in the case of Marcus Gardley’s “The House That Will Not Stand,” which is receiving its world premiere at the Yale Repertory Theatre, it is almost mandatory to read the background information written by Madeleine Oldham if you wish to understand fully what is going on in the first 10 or 15 minutes of this intriguing, beautifully staged play.

The necessity to read the program notes is the result of two factors. First, the subject matter will be alien to most in attendance, for Gardley has chosen to focus on a peculiar aspect of what was once termed “our peculiar institution,” the system of placage endemic to ante-bellum New Orleans that, de facto if not de jure, allowed for formal relationships between white men and free women of color, most of whom were quadroons, relationships that were arranged by the woman’s mother (who received money in return) and often had the man purchase a house for the woman and bear certain responsibilities, including a bequeathal of money at his passing. I would venture to guess that not 1 in 100 of the audience members were aware of this formalized nod to the reality that sex has always won out over race.

The second reason why program perusal is necessary is that director Patricia McGregor has put a very stylized, at moments almost surreal, spin on the production, opting to have her actors portray their characters as slightly larger than life, which means that gestures are often operatic and the dialogue is delivered with a rapidity and volume and a pseudo-Creole accent that, at least for the first five or 10 minutes of the play, may be a bit challenging to the ear. 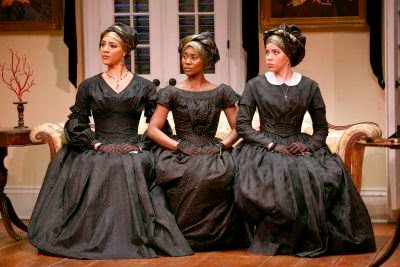 However, once you settle in, you will be thoroughly engrossed in this magical-realistic tale of Beatrice (Lizan Mitchell), the head of a household consisting of her three daughters, Odette (Joniece Abbott-Pratt), Maude Lynn (Flor De Liz Perez), and Agnes (Tiffany Rachelle Stewart), the maid, Makeda (Harriette D. Foy), who is a slave yearning to purchase her freedom, Beatrice’s slightly crazed sister, Marie Josephine (Petronia Paley) and the “spirit” of the man, Lazare (Ray Reinhardt), who fathered Beatrice’s children and, at the start of the play, has died just hours ago (his body is set out on the dining room table for viewing). Hovering over the house like an evil spirit is Beatrice’s venomous enemy, La Veuve (also Paley), who believes Beatrice has, for the second time, poisoned a man she has been living with. 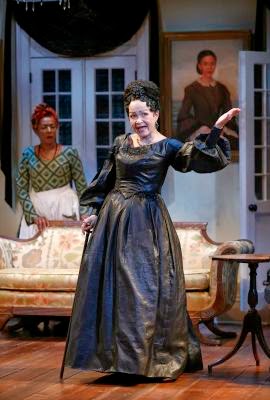 Beatrice hopes, based on the proceeds from Lazare’s will, to take her three daughters to , where color is not such an issue, but her oldest daughter, Agnes, has other plans. She wishes to attend the annual quadroon ball (think slave market with dancing and polite conversation) to be “placed,” something her mother is totally against. Agnes enlists the aid of her sister Odette, asking her to masquerade as Beatrice so that the “mother” can strike a deal with an eligible white man, all while Maude Lynn, who is hyper-religious, protests, to no avail.

Details of all the sub-plots that Gardley has woven into this tale would turn this review into a mini-War and Peace, for there is betrayal and voodoo, a recipe for gumbo and the dead coming back to life. Suffice it to say that they all, in one way or another, serve Gardley’s purpose, which is to dramatize the various faces of subjugation and slavery and the somewhat bizarre methods Southern society used to deal with the fact that men and women, regardless of color, will always be attracted to each other. At the same time, he also takes on the nature of prejudice, which extends even into the black community in the form of an informal caste system based on the fairness or darkness of people’s skin. 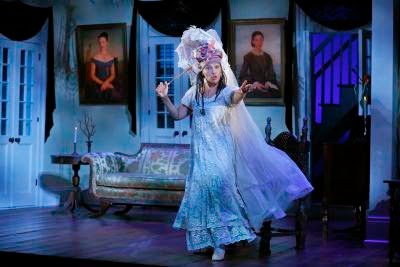 Playing against an almost regal backdrop crafted by scenic designer Antje Ellermann and wearing costumes, designed by Katherine O’Neill, as big and bold as the characters themselves, and moving to the haunting music by sound designer Keith Townsend Obadike, this cast of excellent actors creates a foreign world that the audience quickly gets drawn into, a world alien to ours but, beneath the surface, speaks to the problems of prejudice that still simmer in our country.

The evening runs to well over two hours (with one intermission), but once you enter the house ruled by Beatrice you will be so entranced that you will be unaware of time passing. It is like a spell has been cast, a spell artfully crafted by Gardley that will, once you leave the theater, haunt you.