It Seems We've Sat and Seen This Before

Somewhere -- Hartford Stage Company -- Thru May 4 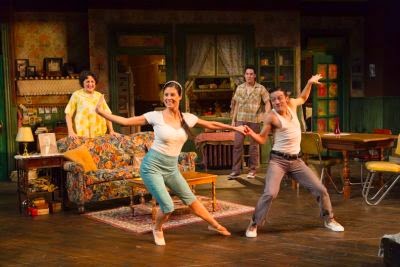 
So, we have a mother who would rather believe in a dream than reality – a father who is absent, though his picture is prominent in the living room – a son who yearns to break free yet is weighed down by family responsibilities – and it’s all told as a memory. Sound familiar? No, it’s not Tennessee Williams’ “The Glass Menagerie,” it’s Matthew Lopez’s “Somewhere,” currently enjoying its East Coast premiere at The Hartford Stage Company.

The show, directed by Giovanna Sardelli, is somewhat uneven. There are moments when the dialogue seems drawn from a Dale Carnegie course and is delivered in a rather painful, “You can do it kid” manner, and yet there are other moments when the characters come alive, the tension and conflict is real, and you almost believe in the dream…and then there are the dance numbers. Dance numbers? Yes, for “Somewhere” is a hybrid of sorts, a play whose parentage includes not only Lopez and Williams, but Neil Simon (think “Brighton Beach Memoirs”) and the good old Mickey Rooney/Judy Garland (may they both rest in peace) “Let’s put on a show” films.

In fact, the show seems filled with echoes from familiar dramas, films and TV shows, so much so that although this is a regional premiere you can’t help but think as the two acts unfold: “Gee, I’ve seen this before.”

The twist Lopez gives to this much worked-over material is that the family is Latino. The Candelarias live in circa 1959. Broadway, where Inez (Priscilla Lopez) works as an usher, is booming and the musical the family has fixated on is “West Side Story” – hence the play’s title (although it can also refer to the absent father who is, well, somewhere – or to the dreams of going “somewhere” other than where they are that most of the characters embrace). Unfortunately, the Canderlarias also live on , in the heart of the 14 blocks slated for destruction to make way for, among other things, . Using the Federal Housing Act of 1949 as a club, Robert Moses, the Big Apple’s “master builder” (his biographer, Robert Caro, titled his book “The Power Broker”) designates the entire area a slum and eviction notices are promptly issued, forcing the Candelarias to move from their apartment – it and the family’s subsequent digs deftly designed by Donyale Werle – the whole set disappears for the final fantasy dance scene. 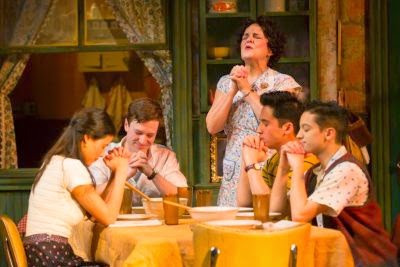 Inez is in denial, much to the frustration of her eldest son, Alejandro (Michael Rosen), who was once a child actor in “The King and I” but has since given up his dreams of Broadway. Not so his younger brother, Francisco (Zachary Infante), who is currently taking acting lessons in hopes of becoming the new Marlon Brando, that is when Francisco isn’t being mugged or attacked by gangs. Their sister, Rebecca (the ebullient Jessica Naimy), dreams of becoming a professional dancer. The possibility that these aspirations may not be pipe dreams comes in the form of Jamie (Cary Tedder) who, although his heritage is German-Irish, is a Candelaria by semi-adoption, having been, as a child, given shelter in the Candelaria’s home after fleeing his abusive, alcoholic father. He is now an assistant to Jerome Robbins, the producer, director and choreographer known for his creativity and tyrannical ways who will direct the film version of “West Side Story” – until he is fired and replaced by Robert Wise. 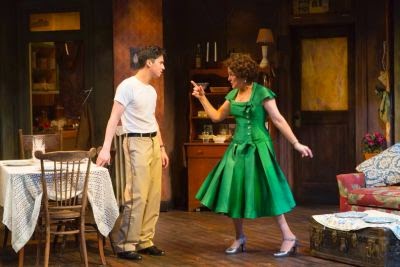 Though the play lacks the underlying tensions and haunting quality of “The Glass Menagerie,” it does have its dramatic moments, chief among them a soliloquy delivered by Lopez in which she details how she met her husband, and a confrontation between Alejandro and Jamie that deals with familial responsibility – both occurring in the second act. If the dance numbers, choreographed by Kurt Crowley, seem somewhat forced, they are yet quite entertaining, none more so than in the play’s final moments when the set recedes, spotlights illuminate a ballroom floor, and the entire family performs dance routines that culminate with Alejandro ascending a staircase towards, one must assume, his future. 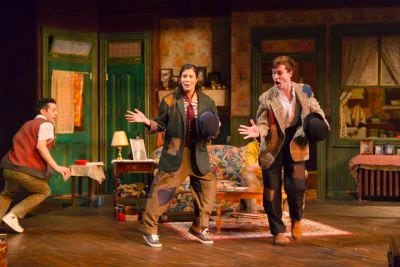 The performances are influenced by the neither-fish-nor-fowl nature of the play – they are, at times, broad and comedic (sometimes to the point of farce), and at others intense and dramatic. Infante seems most beset by this contradiction, for his tone and manner of delivery often seem out of sync with the production, yet if the script had been nudged just a bit further to the comedic right his performance would have been dead-on. The other actors fare better, though the constant shift in tone leaves one often unsure how to respond to what is occurring on stage. Focusing on individual scenes makes one feel a bit schizophrenic, and yet…the overall feeling generated by “Somewhere” is positive, for who doesn’t like a Broadway fantasy in which hard work, pluck and luck lead to success and a role in a major production…oh, you mean like in “42nd Street”? Yes, just another ghost haunting “Somewhere.”