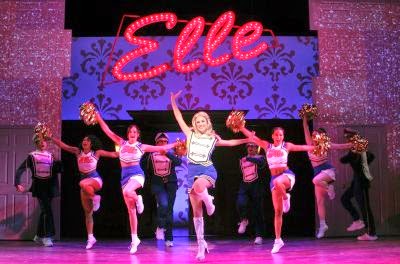 
We go to different restaurants for different experiences. The local bar and grill may not offer haute cuisine but it provides atmosphere and, often, camaraderie and characters. If we want to put on the dog, we go to a four-star restaurant and have our palate (and our wallet) challenged. And then there are the “theme” restaurants that we dine at not so much for the exquisite cuisine as for the often funky fun of it all, the glitz and the in-your-face style, and damn the calories.

So it is with musicals – some offer comfort food, some are exercises in theatrical existentialism (think the current “If/Then”), and some…well, they glitter, they shine, they add a couple of inches to your mental waistline and…well…you just don’t give a damn because you have such a good time. Such is the case with “Legally Blonde,” which recently opened at the Connecticut Repertory Theatre up in . It’s a visual and audile high-caloric repast that does what it sets out to do, which is entertain. Perhaps it’s a guilty pleasure, but every once in a while you’re allowed.

The musical, with book by Heather Hach and music and lyrics by Laurence O’Keefe and Nell Benjamin, is based on a novel by Amanda Brown and a 2001 movie of the same name. In all cases, the focus is Elle Woods (Courtney Hammond), an apparently ditzy blonde, the ultimate “Oh My God!” sorority girl (she’s president of UCLA’s local chapter of Delta NU) who is majoring in design and believes shopping, especially for a man (it’s a god-like, transformative experience), is an ethereal event. She also believes she is about to become engaged to Warner Harrington III (Will Graziano), but he dumps her for a more “serious” young lady, Vivienne (Whitney Andrews), who will aid him in his career path to the U.S. Senate. Initially, Elle sulks but then decides to pursue her one true love to , proving to him that she can be as serious as the next business-suited legal-beaverette.

Once at Harvard (her entry essay is, if nothing else, unique, since it involves cheerleaders), she initially gets kicked out of class by Professor Callahan (David Adkins), but a recent graduate and teaching assistant, Emmet (Colby Lewis), takes her under his wing. She buckles down to work and soon lands an internship in Callahan’s firm, which is handling the murder trial of fitness queen Brooke Wyndham (Khetanya Henderson), accused of murdering her husband. Given moral support by Paulette (Nicole Lewis), a hairdresser, Elle helps win the case, finds self-esteem in her “pink” approach to life and ends up valedictorian of her graduating class.

Hokum? Of course it is, but if you want angst and intensity go find where “The Three-Penny Opera” is currently playing and enjoy. If you opt for CRT and are seeking intensity and angst you’ve obviously come to the wrong restaurant, ah, theater…don’t blame the theater. CRT’s production doesn’t shy away from the fact that “Legally Blonde” is, basically, eye and ear candy. In fact, the lighting design by Sean Nicholl, the sets by Matthew Iacozza and the projections created by Iacozza and Erika Johnson, emphasize the fact – they’re glitzy, stylish, often somewhat over-the-top, but that’s the gestalt of the musical. 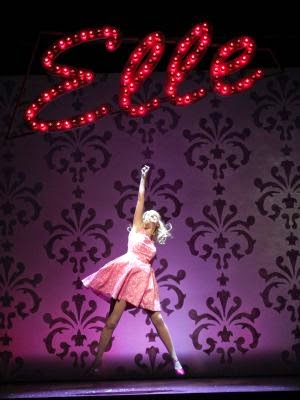 As Elle, is perkiness personified. She’s bouncy, bright and owns the stage whenever she dances or strides across it…and it doesn’t hurt that pink becomes her. Her fine performance is matched by Lewis’s, who milks the role of Paulette for all of it’s comedic worth. 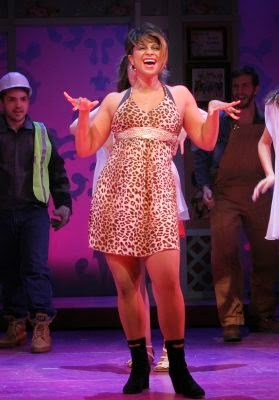 There’s a lot of fine work done by the actors in supporting roles, many of them students at UCONN. Proving the point that there are no small roles for the dedicated actor, Saul Alvarez as Nikos and Chester Allan Martin as Carlos do some nice work in the trial scene near the end of the second act. They’re not on for long, but you remember them, as you will the two dogs created by Carianne Hoff – they’re puppets! 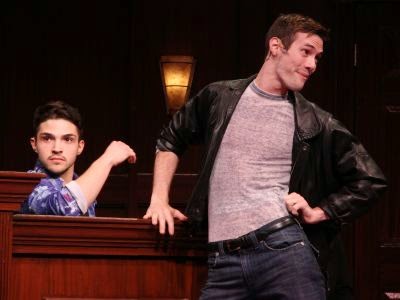 As spring finally sets in, I can’t think of a better way to lighten spirits dampened and chilled by winter than an evening at CRT watching “Legally Blonde.” No, there are no heavy messages or lessons to be learned (contrary to director Gerry McIntyre’s suggestion in the program notes), just a lot of light-hearted fun that is announced by the show’s opening number: “Omigod You Guys.” Just be careful. When you leave the theater you may experience an uncontrollable urge to go out and shop.