I Ought to Be in Pictures -- Ivoryton Playhouse -- Thru May 11 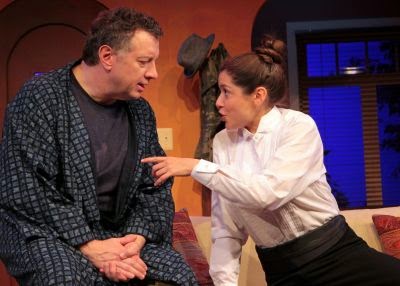 Mike Boland and Siobhan Fitzgerald.
All photos by Anne Hudson.


In ancient Greek theater the actors wore masks, a tradition that has come down to us in the form of the familiar “sad” and “happy” masks so often used on the front covers of books about playwriting, in regional theater logos and the ads seen in theater programs. The two masks denote tragedy and comedy, and they are shown together for a good reason, for scratch the surface of a good comedy and you will find beneath it a tragedy neatly averted. The prolific playwright Neil Simon understands this well, for many of his comedies tremble on the brink of tragedy – one false step by one or more of his characters and we no longer have “The Odd Couple” but “Of Mice and Men.” Such is the case with “I Ought to Be in Pictures,” which recently opened at the Ivoryton Playhouse. Simon’s 1980 play, which was subsequently filmed in 1982, is a somewhat bittersweet take on love, family, commitment and parenting given a warm, engaging treatment that, over its run, should mature into a totally satisfying evening of theater.

The premise of this three-character play is relatively simple. Herb (a solid Mike Boland), is a Hollywood screenwriter suffering a writer’s block of glacial proportions who gets an unexpected guest in the form of his 19-year-old daughter Libby (Siobhan Fitzgerald), who has traversed westward from the Bronx to confront the man who left his family 16 years ago. She hopes that he can, among other things, give her an intro into the world of acting. Her appearance on his doorstep disturbs the comfortable relationship he has with Steffy (Jeanie Rapp), a movie studio make-up artist with whom he has had an on-again-off-again “understanding” for the past two years. Libby, after some cajoling, moves in, and the rest of the play deals with the sometimes fractious maturing of the father-daughter relationship which, as a by-blow, also throws light on Herb’s relationship with Steffy. 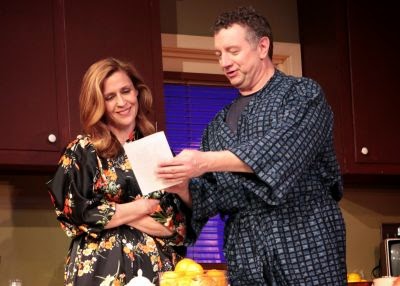 Under the direction of R. Bruce Connelly, with a period-perfect, down-at-the-heels set by Bill Stark and a subtle, emotive lighting design by Marcus Abbot (several fade-outs are quite notable), the play pleases on many levels and you can’t help but leave the theater with a warm glow. Yet, some directorial decisions (or, perhaps, lack of decisions) form a slight cloud over the production, a cloud that might be easily dissipated.

Boland’s performance is rock solid, conveying both the frustration of a writer who has lost his confidence and, once Libby moves in, a man slowly coming to realize what it means to be a father. However, the cloud, or clouds, as diaphanous as they might be, hang over the two female characters. 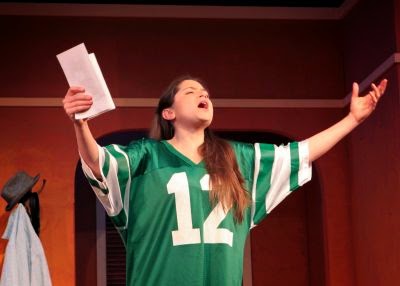 Fitzgerald is a delight to watch, but there is a problem with how she delivers, or has been allowed or directed, to deliver her lines. Early in the first act Herb complains that he has suddenly been confronted with and invaded by a daughter who sounds like Marlon Brando. Either Fitzgerald or Connelly, or both, have apparently fixated on that line of dialogue as a cue as to how Fitzgerald should speak and move. The result is Brando channeled through The Fonz via Marisa Tomei in “My Cousin Vinny.” It seems forced. stagey, even distracting, and the proof that it can be otherwise comes late in the second act when Libby has a highly emotional scene with Herb. Fitzgerald’s delivery speeds up and, although the accent is still evident, it does not dominate and therefore seems natural. Perhaps, over the course of the play’s run, if Fitzgerald takes most of the air out of her lines – “You know…what I…mean…dontcha?” – her background will be just that, a background to a character she appears to be more than capable of bringing to full life.

If Fitzgerald is, at this point early in the run, a bit too over the top, Rapp is just a bit too subdued. Again, a subtle change is all that’s necessary. Right now her character often seems to be on a low dose of Librium (the drug of choice back then). All she needs to do is add a bit of bite to her delivery and her Steffy will come to the fore.

Again, these are early days for “I Ought to Be in Pictures.” Actors settle into roles often only after performing in front of an audience, sensing what does and doesn’t work, and doing a bit of self-evaluation. If Boland holds what he is doing, Fitzgerald brings it down a notch and Rapp ramps it up a bit, then Ivoryton will have a fine, crowd-pleasing production on its hands.