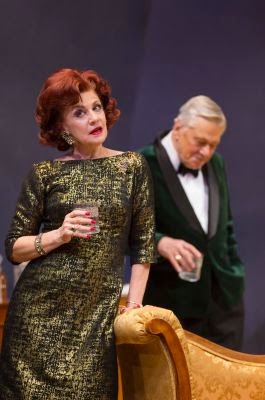 There the word stands, bereft of any adjectives or qualifiers, bare, naked. In our enlightened 21st century, does the word still evoke a response, a frisson of…what? I guess it all depends, but back in the 1960s, in both and the , the word was fraught with emotion, especially for those who overtly proclaimed they were, in fact, homosexual. For the more timid, frightened or image-conscious souls who remained closeted, the conflict of “seeming” versus needful reality often led to subterfuge, acting out and downright deceit. Such is the stuff of “A Song at Twilight,” Noel Coward’s last play now on the boards at the Westport Country Playhouse.

Coward was inspired to pen “Twilight” after hearing an amusing anecdote told of Sir Max Beerbohm as well as by the publication of W. Somerset Maugham’s memoir in which the author strove, through blame, innuendo and sheer hypocrisy, to maintain that façade of “normalcy,” in the process losing many friends who were well aware of Maugham’s true inclinations.

A co-production with Hartford Stage, where it was seen earlier this year, “Twilight” has the same cast, scenery by Alexander Dodge, and director – Mark Lamos, the Playhouse’s artistic director – as it did up in Hartford, but there is something subtly different about this iteration. It seems sharper, tighter, and a lot more enjoyable. Perhaps it’s because there were times up in when the actors became almost lost on the large stage. In , the stage space is smaller, giving the production a more intimate feeling, and intimacy (in all of its variations) is what the play is about. 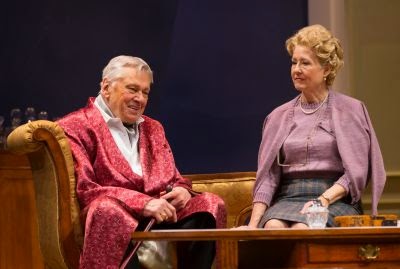 The one-act play is set in a private suite in a luxury hotel in Switzerland, where renowned author Hugo Latymer (Brian Murray) and his wife Hilde (Mia Dillon) await the arrival of Carlotta Gray (Gordana Rashovich), a second-tier film and stage actress and old flame of Latymer’s who has, many years after their affair ended, inexplicably requested an audience with the now aged, ailing author.
Felix (Nicholas Carriere), a waiter, brings the couple libations and after Hilde pours, she departs for dinner and a movie with a lesbian friend, leaving Latymer to confront Carlotta on his own. Upon Carlotta’s arrival, the two play a cat-and-mouse game about Carlotta’s intentions until it is revealed that the actress is in possession of two sets of letters, one old love letters from Latymer that she would like to publish in her autobiography; the other set is of a more incriminating sort. It is the possession of these letters and the memories, passions and betrayals they evoke, that take up the rest of the play, with Hilde returning to help drive the dramedy to its climax. 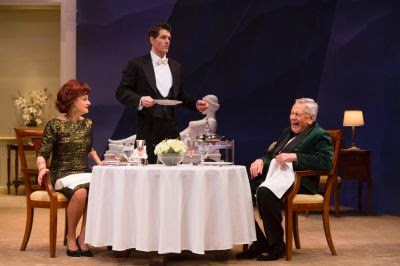 Although the play is not top-tier Coward, there’s enough wit and cattiness in the dialogue to remind one of why Coward was such a popular playwright. Most of the biting remarks are given to Murray, who creates a Latymer that is irascible, overbearing, condescending and…haunted by his past. Acerbic as Latymer is, he meets his match when Carlotta appears. Rashovich does an excellent job in playing Carlotta as a woman who is well aware of her limitations and yet is more than what she initially appears to be. The two characters’ extended confrontation drives most of the play, and much of the interest here is in the inexorable shift of power between Latymer and Carlotta – initially he appears to dominate but ever so slowly she breaks him down and, in the end, leaves him pondering – and perhaps ruing – how he has chosen to live his life.

Given the vividness of these two characters, Dillon’s Hilde seems to hover in the background, that is until the latter part of the play when she returns and, emboldened by having consumed wine and several Stingers, reveals a depth of character – and an understanding of her marriage – that, along with Carlotta’s revelations, forces Latymer to confront his past.

Lamos has kept the two visual vignettes that close the two movements of the play: young male actors (Bryan Kopp and Joseph Merle) stand nude behind a scrim (a theater drop that appears opaque when a scene is lighted in front and transparent or translucent when a scene is back-lit) miming intimacy. As with the production, it is questionable if these two “memory” moments, though tastefully staged, add much to the production. This is especially true of the second “moment,” for it draws attention away from what is doing as his character deals with the weight of memories.

Evoking an era when class, style and urbane verbal jousting were valuable social assets, “A Song at Twilight,” which runs through May 17, pleases on a number of levels. For tickets or more information call 203-227-4177 or go to www.westportplayhouse.org
Posted by Geary Danihy at 3:10 PM