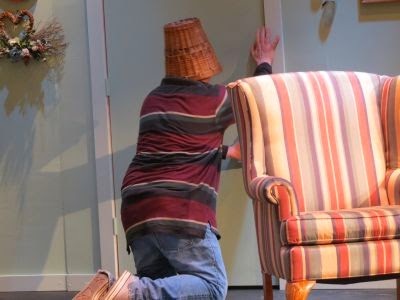 
Some might say that making sure one spouse is satisfied and happy is a daunting task, but what about two? That’s the premise of the Windsor Jesters’ production of “Run For Your Wife,” a British farce under the capable direction of Rosemarie Beskind that recently opened up in .

The 1983 play by Ray Cooney ran for nine years in ; a film of the farce was released in 2012 and ran for approximately nine minutes. The plot is a bit strained, but if you suspend your disbelief and just go with it you’ll have an enjoyable evening.

It seems that after acting as a Good Samaritan (no good deed goes unpunished), taxi driver John Smith (Chris Bushey) finds himself in a bit of a bind. You see, John has two wives – Mary (Helen Malinka) and Barbara (Tracy Weed) – ensconced in digs not far from each other. He keeps them happy, and ignorant of each other’s existence, by keeping a very tight schedule annotated in his notebook, a schedule that is disrupted when he finds himself in the emergency room of a hospital after intervening in the mugging of an old lady (who, thinking he’s one of the muggers, assaults him with her purse). The schedule goes out the window and, even worse, two police detectives, Det. Sgt. Troughton (Mark O’Donnell) and Det. Sgt. Porterhouse (Steve O’Brien), begin investigating the incident after Smith’s wives, independent of each other, call in a missing person’s report. All of the attention, and the disruption of his schedule, and the fact that he has two residences, puts Smith in a bit of a bind.

The farce is, of course, driven by Smith’s desperate need to keep his bigamy a secret, a task he is helped in accomplishing, up to a point, by Stanley (Bruce Larsen), an out-of-work upstairs neighbor who early on learns of Smith’s “problem” and assists in a somewhat confused, ham-fisted fashion. Since Smith is something of a hero (at least for 15 minutes), the media in the form of a newspaper reporter (Jeffrey Weber, who also plays a rather light-in-the-loafers neighbor, Bobby Franklin) gets involved, furthering Smith’s problems.

The cast seems comfortable with the “idea” of farce, which demands a good deal of split-second timing as doors open and close, allowing for the multiple entrances and exits that are one of farce’s staples (what would a farce be without at least four doors?) Good work is done by all, with special praise going to Larsen as the somewhat confused yet willing neighbor – his farmer-on-the-phone routine is a delight -- and Weed, as Smith’s second wife (who is on the other end of the “farmer” phone call). Both actors are blessed with a great sense of comic timing and deliver their lines with a great deal of brio. Of course, the whole shooting match relies on the bigamous Mr. Smith, and Bushey does a nice job with creating a man much beset by his amorous proclivities. However, for farce to work it requires what one might called frantic restraint, and Bushey sometimes – not often – allows the “frantic” to dominate the “restraint,” although a nod has to be given to his newspaper-eating scene (don’t ask – go see) which closes the first act.

If there’s a problem with the production it has nothing to do with the cast or the direction but rather with the venue itself, which is a school auditorium/theater. Perhaps its designer had in mind the need to deaden the sound of 200 or 300 raucous school children assembled en masse, for the theater seems to absorb sound as eagerly as the proverbial sponge soaks up water. Consequently, some lines just get eaten up by the walls and ceiling. It might behoove Beskind to sit in the theater’s back row during a run-through to get a feel for the sound-gobbling nature of the theater, and then urge her cast members to play a bit more to the balcony.

For those not familiar with the Windsor Jesters, it should be noted that it is the oldest, continuously operating community theater group in , having produced its first show in 1951