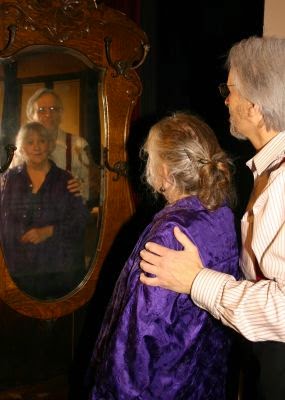 
Almost all families have one relative who just rubs everyone the wrong way, whose name has a question mark next to it when planning the guest lists for holiday gatherings or weddings. You break down and finally invite him or her…and then regret the decision and swear you will never do it again. Such is Olive, a bitter, cantankerous, argumentative actress known for her “sausage” commercials now in the “third stage” of her life who is currently striding the stage at Stratford’s Square One Theatre Company in Charles Busch’s “Olive and the Bitter Herbs,” directed by Tom Holehan. Your appreciation of Olive – and the play – may very well depend on your own personality…and tolerance for intolerance. It’s being promoted as a “hilarious comedy,” but I imagine the hilarity is in the eye of the specific beholder.

Olive (Alice McMahon) finds joy in not enjoying life. She’s a fault-finder par excellence, and as the play opens she is currently finding fault with her younger friend Wendy (Michelle Duncan), her next door neighbors Trey (Jim Buffone) and Robert (Barry Hatrick), and Sylvan (Al Kulcsar), the thrice-widowed father of the woman who is the president of the co-op board for the building where Olive lives. The only person she approves of is a phantom named Howard who haunts a mirror in her apartment. The needful, insecure Wendy wants to nudge Olive out of her self-induced funk, so she invites the next-door neighbors over to see if she can orchestrate a détente of sorts. Olive is snippy and, at times downright nasty to her guests, as she is to Sylvan, who seems to thrive on abuse from females. Trey, an out-of-work illustrator of children’s books is bitchy as his partner, Robert, attempts to put a positive spin on the visit. These are not folks you would want to go bowling with, and it remains to be seen if you would want to sit watching them for two hours. Again, it depends on your personality.

The play is driven by two factors: Olive has made a cameo appearance in a TV crime drama and the episode is about to air…and…the aforementioned blithe spirit, Howard, seems to have been acquainted with, or related to, everyone involved, and these connections are, over the course of the evening, to be revealed. The TV show and the ghost are the primary reasons why everyone continues to drop in on Olive (Lord knows, it’s not her personality or conviviality). Unfortunately, both plot lines lead nowhere. Most of Olive’s scenes end up on the cutting room floor and the various connections the characters have with Howard are…well, just that, connections of the seven degrees of separation sort.

Problems abound with the play, most having to do with the script, some with the performances. The biggest problem is with the disagreeable Olive, mainly because there’s no sub-text, no reason offered as to why she is the way she is – she’s just nasty. Yes, you get a glimmer of a possible change in her at the end of the play, but it’s a change unearned, and even if it was earned, would you care? There was an opportunity to develop this point and bring it to a dramatic conclusion, and to show the audience that Olive’s armor, hand-crafted using polished spite, can be cracked, when Wendy finally lets go and tells Olive what she thinks, but the opportunity is lost – Olive just makes a wisecrack and remains imperturbable.

Then there’s the relationship between Trey and Robert, the gay couple. Howard the ghost has told Olive that on the night the TV show is aired “all will be revealed.” Well, what is revealed re. Trey and Robert is that they have cheated on each other multiple times during their relationship, and cheated in a fashion that supports the misguided idea that gays cannot maintain monogamous relationships because they are uncontrollably promiscuous – they just can’t help themselves. Thought we’d come farther than that – maybe not – but the revelations of infidelity that come late in the second act are simply not humorous.

Finally, there’s Sylvan…and his fascination with Olive. The final scene is about as believable as watching Harry Potter drop by to console…and make overtures to…Medusa. Again, motivation is lacking...it’s a wrap-up that’s supposed to make us believe that there’s something worth caring for about Olive. Perhaps I nodded off, but I missed that moment.

“Olive” is (supposedly) a comedy with some farcical elements…and comedy and farce rely on timing, which seemed to be off the evening I saw the production. It may have had to do with some dropped or fumbled lines. In my experience, you drop one line and the worst you can expect is some gentle ribbing back in the dressing room. You drop several, or seem to grope for a word or phrase, and it creates a tension amongst your fellow actors, for now they not only have to remember their own lines and feed each other but have to be constantly aware that they may have to cover. It plays hell on, if nothing else, timing. Things may tighten up as the production proceeds in its run. One can only hope.

Square One continues to surprise and delight, boarding plays that are often intriguing, sometimes gripping, and almost always enjoyable. Unfortunately, “Olive” seems to be a mis-step, but that’s to be allowed. If you’ve stayed alive for 24 years, you must be doing a lot of things right. “Olive” just isn’t one of them.