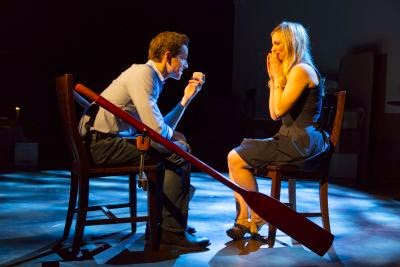 That’s “The Last Five Years,” an engaging musical that recently opened at Long Wharf Theatre in . Written by Jason Robert Brown and directed by Gordon Edelstein, the theater’s artistic director, the musical initially premiered in 2001 and then had an off-Broadway run in 2002.

“Five Years” is something of a hybrid in that the dialogue is minimal to non-existent; the story, which is circular in nature, is told via a series of songs sung by two characters, Jamie (Adam Halpin), an author who has recently hit the big time, and Cathy (Katie Rose Clarke), a struggling actress. In the opening scene, “Still Hurting,” the marriage between Jamie and Cathy is over, but there’s a quick segue back five years to when they met, as Jamie, who is Jewish, proclaims his delight in having found his “Shiksa Goddess.”

Since the songs have no dialogue as prologue you have to pay close attention to understand where exactly you are in the rise and fall of this relationship, a task that is not overly daunting. The songs themselves, though tuneful (a blend of pop, jazz, classical Latin, folk and even a bit of klezmer) are not the standard Broadway melodies that will have you leaving the theater humming. Rather, it’s the words that, even if you don’t remember them exactly, will have the greatest impact, and much of the enjoyment to be derived from “Five Years” is how skillfully Brown is able to create and define both character and situation (even with a time scheme that is not linear) through lyrics. 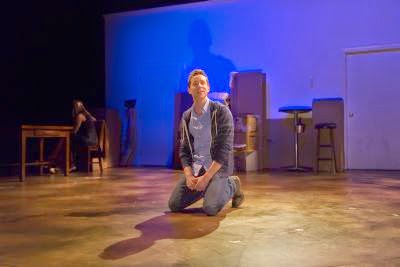 As noted, the evening consists of a series of musical set-pieces, and some of them are priceless. The aforementioned “Shiksa Goddess” is filled with the joy of a young Jewish man finally getting to date a girl whose last name doesn’t end in “---stein” or “---berg.” Halpin does a very nice job of creating a young author on the make who cannot hide his delight in his success and the “spin” of the book scene. He is especially effective in “Nobody Needs to Now,” which he sings to an invisible paramour reclining on a bed – with just a little effort you can “see” her because Halpin brings her to life, as he does Schmuel, (“The Schmuel Song”) a Jewish tailor he has written as story about. 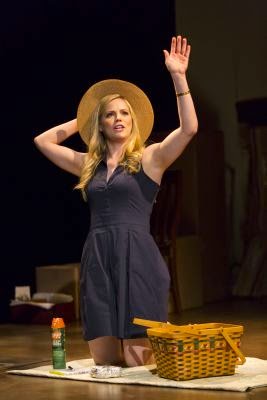 However, it is Clarke who steals the show. In number after number she is, quite simply, riveting. Whether she is trying to make herself believe she is a vital part of Jamie’s literary high-life (“I’m a Part of That”), describing a less than glamorous summer acting in regional theater in Ohio, (“A Summer in Ohio”), auditioning for roles in musicals (“When You Come Home to Me”) or telling Jamie the story of a high school friend (“I Can Do Better Than That”), Clarke commands the stage. Under the effective, creative lighting provided by Ben Stanton, working with a set by Eugene Lee that captures the tenuous nature of the couple’s relationship and backed by an adept complement of musicians perched above the stage, Clarke simply shines.

Anyone who doesn’t believe you can create believable, engaging, multi-dimensional characters simply through songs should get down to to see what Clarke and Halpin, under Edelstein’s sensitive direction, do with Brown’s material. You won’t be disappointed.