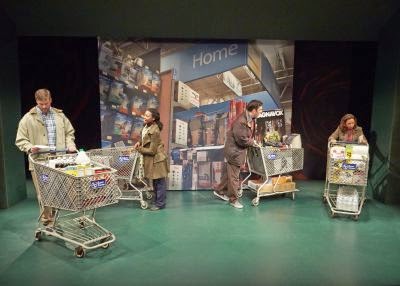 Falling in and out of love can be painful, but with just a slight tilt of one’s attitude, or a squint of the mind’s eye, it can also often be hilarious, and that’s what you’ll see on the stage at Hartford TheaterWorks if you go to “Love/Sick,” a delightful new comedy (complete with some heartstring pulling) by John Cariani, the author of the quirky “Almost, Maine.” Although just about anyone will be able to relate to the goings on, “Love/Sick” is great therapy for those of us who have loved, lost and had a drink afterwards (and offered a soul-searching monologue to a bored bartender), for they say laughter cures all ills.

Constructed much like “Almost, Maine,” Cariani’s “Love/Sick,” directed with a keen eye for pacing, transitions and the building of “moments” by Amy Saltz, is a series of 10-minute vignettes that deals with the various aspects of courtship, marriage and divorce, many driven by misunderstandings that, appropriately, have to do with what we say, don’t say or, in some cases, simply can’t say.

In the show program, casting credit goes to McCorkle Casting Inc. Well, kudos to McCorkle Casting Inc., because the four actors who play multiple roles – Pascale Armand, Bruch Reed, Chris Thorn and Laura Woodward -- are, well, simply superb, especially since they are all called upon to create characters in tight time frames and make them believable and distinct. This they do almost flawlessly. 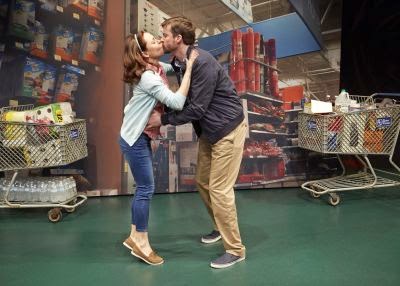 They are aided in this by Cariani, who knows how to set the premise early, often with a surprise – several times he has the audience thinking the scene is going in one direction only to turn the wheel and send it off in an entirely unexpected direction, much to the audience’s delight. For example, the answer to a simple question – “What did you have for lunch?” sends “Lunch and Dinner,” which opens the second act, spinning off into unexpected territory.

Almost all of the 10 scenes blend humor with a touch of pathos – and a lot of truth. As I sat and watched the performances unfold I couldn’t help but see heads in the audience nodding in agreement, shoulders leaning towards each other in acknowledgement of a moment that rings true – and there are many of these. 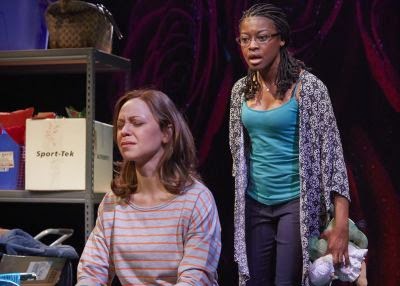 The tone is set early. The first scene, “Obsessive Impulsive,” may be a bit hard to warm to, since it deals with a compulsion – just-can’t-stop-myself-from-doing-what-I-want-to-do – that may be alien to many in the audience, but Cariani – and Thorn and Pasquale – totally win over the audience with the second scene, “The Singing Telegram,” in which Cariani uses dramatic irony to make those in the audience twitch in their seats in anticipation of a revelation they know is coming. At the fade-out, the audience was sold, secure in the idea that the playwright…and the cast…knew what the hell they were doing. After that, the evening just flowed as scene after scene struck some chord in the audience’s collective emotional psyche.

So, the cast. They create so many memorable moments. What stands out hours after leaving the theater? Well, Thorn as the Singing Telegram Man, who has to convey the set-up and the aforementioned dramatic irony with body language as much as dialogue; Woodward as a bride with cold feet, who transitions from manic to…reflective; Reed as a man who is challenged by delight and finds himself tongue-tied at the prospect of being loved; and Armand as a woman who finds herself bored with her marriage and, to spice things up, creates an e-mag article that opens up new, possibly violent, avenues of expression. 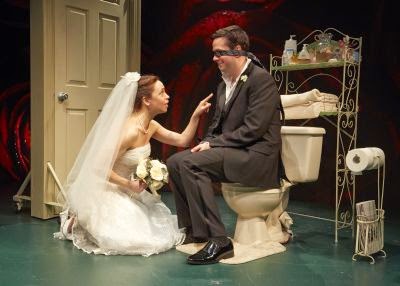 Pay particular attention to the final vignette – “Destiny” – for Cariani slyly weaves in every theme he has dealt with in the first nine vignettes in dialogue that is also appropriate to the scene itself. It’s a lovely coda to an evening that is fulfilling on so many levels. In sum, this is smart playwriting, smart acting, and smart directing. I defy you to sit down at TheaterWorks and watch “Love/Sick” and not have a good time…and…come away a little wistful, remembering your moments when an errant word sent a relationship spinning off into space, when a misunderstanding motivated you to do something you later regretted, and a chance encounter with a former lover made you think: “Gee, we could have done things better…I could have done better.”

Tragedy makes you squirm…but comedy, smart comedy…makes you think, because when you exit the theater and drive home you ask, “What was I laughing at?” The answer, inevitably, is “Yourself.”