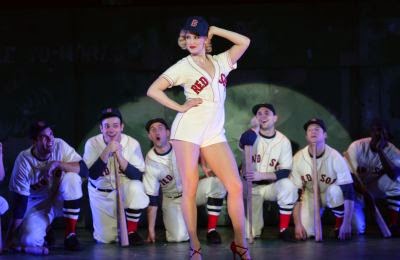 Angel Reda as Lola.
All photos by Diane Sobolewski


There’s something a bit off about Goodspeed Opera House’s enjoyable yet tame production of “Damn Yankees,” which recently opened at the venue in . The problem is, on first or second thought, almost indefinable, since the cast is professional and the energy is, as always, at a high level. On the drive home from watching the show, I thought about what I had seen and why, unlike with most Goodspeed productions, I was essentially unmoved. Yes, the musical is almost half a century old, but age is not the problem – people still curse the Yankees, and Joe DPietro has updated the script so that the rivalry is between the Red Sox (rather than the Washington Senators) and the Yankees. So, what is it?

Well, it could be the sum of many little things. First, Goodspeed is renowned for using its limited stage space to make it seem larger than it really is (the wings are cramped and there’s virtually no fly space). However, in the case of “Damn Yankees,” everything seems a bit too visually constricted by Adrian Jones set design, with almost all of the action occurring down-stage, giving the show a very linear feel. By and large, actors and sets enter from the same position stage left or right, placement and movement constricted by the need to have a dugout upstage. This constriction has forced director Daniel Goldstein and choreographer Kelli Barclay to essentially line up the actors and dancers left to right in scene after scene. After a while it becomes visually boring.

Then there’s the book and score itself – as listed in the program: “Words and Music by Richard Adler and Jerry Ross (does “Words” mean lyrics?), and Book by George Abbott and Douglas Wallop – Hmmmm – where do “book” and “words” converge and diverge? By and large, the show lives off its anthem, “Heart,” as in, “You’ve Got to Have Heart,” which is sung, and then sung again, and then again…and again. The only other notable tune is “Whatever Lola Wants.” The rest of the numbers, be they ballads or chorus ensembles, you easily forget as soon as they are over. 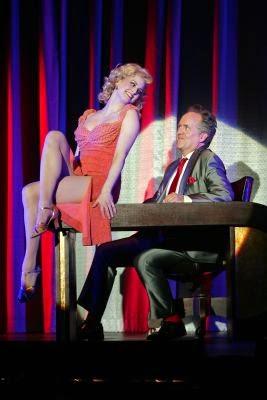 Or perhaps it’s that there are too many actors verging on the edge of caricature – it seems that just about every character is played “big,” from Coach Van Buren (Ron Wisniski) to Applegate (David Beach), Lola (Angel Reda) and the entire Red Sox team. Lines are delivered with little restraint and often at an octave higher than necessary, and if the lines are punch lines, well, they are telegraphed, with an appropriate pause after delivery for the expected laughter. The only two actors who keep their performances in check are James Judy as Joe Boyd and Ann Arvia, who plays his wife Meg – their scenes together are, by and large, both touching and real.

Odd to say this about a stage production, but the effort just seems, well, somewhat staged, thus never allowing you to truly enter into the lives of the characters (much unlike the experience watching the delightful “Most Happy Fella!” which ended Goodpseed’s last season). In other words, it’s difficult to forget that you are sitting in the house watching a show. 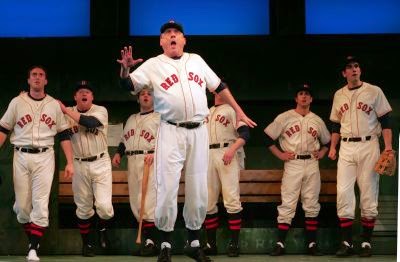 Ron Wisniski and "The Team"

The musical does have its moments – “Goodbye, Old Girl,” sung, in turn, by Judy and Stephen Mark Lukas, who, compliments of a soul-selling deal Boyd has made with Applegate, play’s Boyd’s transmogrified younger self, Joe Hardy. The character switch is nicely directed by Goldstein, as is the reverse switch near the end of the second act. Equally charming is the “Two Lost Souls” number, sung by Lukas and Reda (in a moment when she is not trying to be the vamp of the century), and Beach does a satisfying vaudevillian turn with “Those Were the Good Old Days.” As pleasing as these numbers are, they just can’t pump life into a show that, with all of its whirling bats and be-toweled buff athletes, seems to lack…well…heart.