Art and Red in Rep -- Westport Country Playhouse -- Thru May 29

As the saying goes, “Art is in the eye of the beholder.” Facile, but perhaps true, yet there is Auguste Rodin: “The artist must create a spark before he can make a fire and before art is born, the artist must be ready to be consumed by the fire of his own creation.”


There is obviously a gap, perhaps an abyss, between those who create art and those who behold it (or own it to place it above their mantle), and this lacuna is the inspiration for Mark Lamos’s decision to present two plays, John Logan’s Red and Yasmina Reza’s Art, in a semi-rep format at the Westport Country Playhouse. The former will play on odd days, the latter on even days through May 29, and though in an interview Lamos, who directs both plays, did not suggest an order of viewing, from an emotional and logical perspective odd should precede even, for one cannot behold something before it is created. Either way, both productions are, in their own way, gripping, creating a wonderful intellectual, emotional and humorous excursion into the creation and possession of art.


Red, which opened on May 7, is a two-hander that has Ken (Patrick Andrews), a neophyte painter, signing on as Mark Rothko’s assistant. Initially in awe of the renowned painter who has been commissioned to create a set of murals for the soon to be opened Four Seasons restaurant in the Seagram’s building, Ken agrees to do whatever menial tasks Rothko (Stephen Rowe) requires. However, over the course of this one-act play, accentuated by effective, evocative lighting by Matthew Richards and dead-on sound design by David Budries (most appreciated by those of us of the Hi-Fi-LP era), Ken begins to challenge and then defy Rothko’s views on art and its ever-changing progression.


Set in Rothko’s Bowery studio, hauntingly rendered by scenic designer Allen Moyer, who makes the Playhouse’s stage seem both cavernous and hermetic, Logan’s play is a feast for the ears and the mind, for most of the evening is an extended argument about art, the creative process and the age-old conflict between generations. Powered by Rowe’s absorbing creation of the acerbic, abstract expressionist painter who defied labels, ably counterbalanced by Andrews’ coming-of-age defiance, this production rushes forward to a climax and denouement that is totally satisfying with, compliments of Lamos, many deft touches along the way, none more pleasing than when Rothko and Ken prepare a canvas, a balletic, frenetic sequence set to classical music that, at its conclusion, drew well-deserved applause, for it captures, without dialogue, the passion inherent in the creation of art, the “spark” to which Rodin referred. It’s a truly exciting theatrical moment. 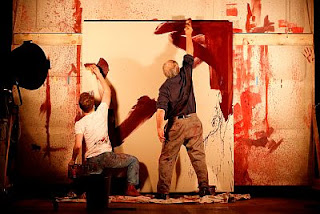 Art may exist on its own, ethereal, ineffable, but artists have to eat, which means they have to sell their paintings, and that introduces the idea of assigning value to brushstrokes, the subject of Reza’s Art, which opened at the Playhouse on May 8. Whereas Red essentially deals with creation, Art focuses on the interpretation and valuation of that creation, both tasks being, in essence, frighteningly arbitrary.


On even days at the Playhouse, Rothko’s studio lurks in the background of an apartment (or series of apartments defined by the art hanging on the wall) in which Reza’s Art unfolds. Serge (John Skelley) has just bought a painting for 200,000 Euros. It is by a renowned artist. It is a white canvas, that is, white on white. That’s it – it’s white. Marc (Benton Greene) finds the price outlandish and the painting ridiculous, which hurts Serge’s artistic sensibility and pride. Caught between them is Yvan (Sean Dugan), who is about to be married. As in her God of Carnage, Reza specializes here in building on the trivial, using it as a flashpoint to create emotional pyrotechnics that, in the case of Art, come with a great deal of humor. 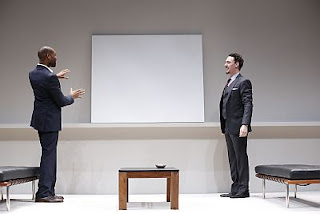 Discussions about the value, or lack of same, of the painting spiral into a test of friendship that becomes intensely personal, revelatory and physical. In the process, this ensemble cast doesn’t miss a beat, playing off each other with such confidence and comic timing you might think they were one year into the run. The high point of the evening is Yvan’s extended monologue about a phone conversation he has with his step-mother while his intended listens in -- it’s a comic tour de force -- and who would ever think that eating olives could elicit laughter, but it does, thanks to some emotive body language by the cast and a smart piece of blocking by Lamos.


That the two plays “speak” to each other is obvious, and if you listen closely to Logan’s dialogue written for Red you will catch comments about “white” (and about how to view a painter’s work) that can be brought forward when you watch Art.


Now in its 86th season, the Playhouse has a pair of winners on its hands, offering two evenings of thought-provoking theater that will often make you laugh…and surely make you think.


Art and Red run on alternate days through May 29. For tickets or more information call 203-227-4177 or go to www.westportplayhouse.org.
Posted by Geary Danihy at 3:30 PM