There’s the actress, and then there’s the play. The actress is superb. The play? Well, I guess that’s a matter of taste…or fortitude, or an inherent ability to find delight in the absurdly static, or a deep desire to wallow in the existential meaning (or meaninglessness) of life. In any case, Happy Days, by Samuel Beckett and directed by James Bundy, is on the boards at Yale Repertory Theatre through May 21. Go if you wish to see how a two-time Oscar-winning actress can make lemonade out of lemons; stay home if you already know that life bogs us down in quotidian repetition, so much so that we wake up one morning to the alarm and feel stuck, unable to move, paralyzed.


Yes, from the moment the curtain rises, Winnie (Dianne Weist) is literally and figuratively stuck, for she is embedded up to her chest in stone, surrounded by an arid, lifeless landscape (designed by Izmir Ickbal) with an unchanging, banal sky above her. For comfort, she has a bag that contains all of her earthly possessions – a brush, a comb, an intriguing toothbrush (what, pray tell, is written on its handle?), a bottle of tonic, glasses and a magnifying glass, other pedestrian objects and…a gun, affectionately called “Brownie.” (Near the end of the first act, as Winnie picked up the gun, an audience member behind me whispered: “Use it.” The comment spoke volumes.)


Winnie is a talker…she just won’t shut up. Her husband, Willie (Brits will get the phallic reference) is seldom seen and less heard. Willie (Jarlath Conroy) grunts, he groans, he reads the newspaper, he crawls into a hole with Winnie’s guidance – she urges him to back in. Written in 1960, long before we knew that men were from Mars and women from Venus (1992), the play can be interpreted broadly in two ways: men are uncommunicative oafs while women are sensitive creatures who need to express themselves, to verbalize their emotions, or, on the other hand, men need to shelter themselves, to figuratively or literally crawl into a hole to shield themselves from women’s constant chatter (Beckett wrote the play just before he was about to be married – interpret that as you will).


Whether Winnie is buried up to her chest or her neck, Wiest captivates in a role that is, to say the least, physically restrictive. She deftly uses her hands, arms and face to convey a broad range of emotions, many of which border on despair that is fought against with the oft-repeated phrase: “Oh this is a happy day.” The fact that it isn’t a happy day, that it can’t be a happy day, that Winnie’s unbridled (and some would say maladjusted) optimism is the only thing that keeps her from grabbing “Brownie” and ending it all, is made manifest early on.


The play is an exercise in dialogue as prattle, unrelenting prattle, a deluge of words used to hopefully keep the “blue meanies” at bay. There can be no silence as Winnie expresses appreciation for Willie’s grunts, a faint acknowledgement that she at least exists, that her life has meaning (meaning defined by a male’s attention). Wiest gives Winnie, both in voice and mannerisms, an often child-like quality, and her endless stream of words is akin to those of a frightened child whispering over and over again: “There are no monsters. There are no monsters.” Of course, there are monsters that can slowly yet inexorably consume one’s soul.


If you have toyed or battled with depression, Happy Days is not the play for you. It is literate (there are a lot of allusions to philosophy and poetry) and certainly single-minded in its view of life, whatever that view may be, but it is also unrelenting, and the final image of Willie crawling towards Winnie is open to several interpretations, including that Willie wishes to grab “Brownie” and end it all. 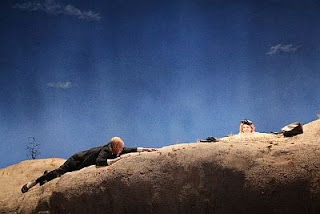 To be blunt, this is a bleak theatrical experience with many sexual undertones about how a marriage, and life, can become not just dysfunctional but stultifying and, perhaps, unbearable. As such, it offers the audience an intentionally warped magnifying glass with which to view existence, and the hope that saying “This is a happy day” will make everything better, or at least livable. It doesn’t.