On Barbra, Real Estate and Writing 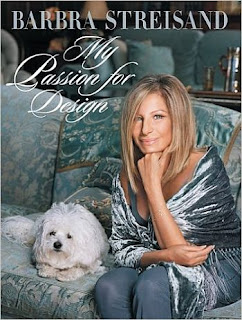 So, you’re leafing through a coffee-table book entitled My Passion for Design by Barbra Streisand and you come across a chapter that deals with the cellar of her house, a substantial space she has transformed into a mini-mall of high-end boutiques. You jokingly say to your husband, “I wonder what it would be like to work in a place like that?” From that comment, made by playwright Jonathan Tolins, emerged Buyer and Cellar, a one-character (sort of) play that will open at the Westport Country Playhouse on June 18, with previews starting June 14. The production is a reunion of sorts, for Michael Urie, who won numerous awards for originating the role, will be joined by director Stephen Brackett and many other members of the original artistic team.

Urie, who plays Marc St. James on the award-winning TV series Ugly Betty, will reprise the role of Alex More, an out-of-work actor who catches sight of an ad for the position of “shopkeeper” in Streisand’s surreal mall. He gets the job and the rest of the evening entails his learning the ropes while attempting to establish a relationship with the diva, a woman with whom he is fascinated.

In a recent interview at the Playhouse, Tolins discussed how the play came about and the many different strands of meaning and allusions woven into what might appear, on first viewing, to be a simple send-up of a mega-star and her somewhat odd proclivities.

Tolins, a Fairfield resident since 2009, was born in Brooklyn, raised in Roslyn, NY, and attended Harvard, where he was active in theater, both writing, directing and acting, studied playwriting with professor William Alfred, and co-wrote one of the Hasty Pudding plays, an annual cross-dressing musical staged by students. His connection with Alfred is one of those “six-degrees of…” serendipitous relationships, for Alfred wrote a play called Hogan’s Goat, which in its long off-Broadway run provided a break-out role for Faye Dunaway who would, years later, play the role of the mother in Tolins’ The Twilight of the Golds.


As for the gestation of Buyer and Cellar, Tolins said that in 2010 his husband brought Streisand’s book back from the library and they started looking though it.


“We’re both fascinated by the intersection between celebrity and real estate,” he said. “So we were looking at this book and on page 190 there’s a chapter that begins about her basement, which, instead of storage and closet rooms she built this street of shops – a cobblestone street with a selection of stores.”


Tolins’ reaction to this?


“We thought it was pretty incredible,” Tolins said, and then he mentioned to his husband the possibility of someone working down in this subterranean mall, “and that idea stuck with me, the idea of someone having to be down there, to be the shopkeeper. So, I wrote a short essay, the diary of someone who got that job, and I submitted it to The New Yorker. They rejected it, but I have a good friend named Craig Gartner who manages Jesse Tyler Ferguson,” referring to the actor best known for his role as Mitchell Pritchett on the ABC sitcom Modern Family, “and Craig said I should write this as a one-man show for Jesse. And I thought, well, that’s the kind of thing, five years later, I would say I should have done.”


But the idea persisted. Tolins bought a copy of Streisand’s book and read it cover to cover, making notes on what he found interesting, “bizarre or poignant in some way,” meshing that with reading a Streisand biography and the many stories and anecdotes he had heard over the years about Streisand, “because I’m Jewish and gay,” he said, “and that’s something that just happens.”


The Jewish/gay intersection might raise an eyebrow or two, if only because the two words, both often fraught with multiple connotations and at times, and for some, heavy baggage, requires explication.


“For Jewish people,” Tolins said, Streisand “is the biggest star that we have. I guess you could say, well, Jolsen was big, but Streisand is this unapologetically Jewish persona who became a mega-star, and she showed you didn’t have to change who you were to succeed in a goyish world. You could bring that world to its knees.


As for the gay connection?


“For gay people,” Tolins said, “it’s similar. She’s indomitable. Through sheer strength of talent she became the star she wanted to be. The other thing that’s fun about her, that makes it possible to do a play like this, is that she’s not self-destructive. So many stars come to a bad end,” he said, “but she is pretty strong and secure. You know she’s okay, that she’s going to be okay.”


And yet there’s her basement, a mall, a place where, normally, multitudes gather to shop, converse and mingle that apparently she has converted into a shrine to consumerism focused on the individual, the sole shopper who covets for purchase what she already owns. It is this contradiction that gives Tolins’ play a greater weight, the whisper of existential loneliness beneath the humor, a loneliness that embraces both the play’s narrator and his subject.


“What’s interesting about what the play explores,” Tolins said, “is how that kind of incredible celebrity can lead a person to be somewhat out of touch.” He paused, and then shifted gears. “I started to think about my own life in Los Angeles as a temp, an actor, and all the people I know who are called…who are underemployed…and the odd jobs they have, and I imagined this guy, Alex Moore, who ended up in this job and would be the kind of person Barbra might have a real friendship with.”


Alex gets the job, but it is Tolins who envisioned what it might be like to be the caretaker of the cathedral to consumerism. Anyone who has ever written a scene for a film, a play, a novel or a short story knows that, as you are writing it, you can’t help but be subsumed into what you are creating.


“I always say there was one magical moment in the writing process,” Tolins said, “when I got to the point when I was so deeply into it that I actually felt it was happening to me. Certain moments when, like, when [Streisand] takes Alex’s hand and he describes how it feels, and rubbing her nails, her famous nails. Or there’s a line where, at the end of the play – ‘She took me by the hand and led me out through…into the cruel Malibu air,’ or something, and I thought, she makes this trip (down into the ‘mall’) to see me every day, and when that line ‘happened,’ – when you’re writing you’re not really writing, you’re just letting it happen, and I felt, ‘Wow,’ I’m really in this, I’m really feeling like he is.”


And then there are these lines, also occurring near the end of the play:


ALEX: She smiled and walked over to the couch and sat down next to me. Close. Uncomfortably close.


BARBRA: This is nice, “hanging out” with you. People don’t come by and visit me too often. Nobody “pops by.” I spend a lot of time alone.


Tolins wrote about and, as a writer, traveled to a different world, a world most of us can only imagine, a “somewhere over the rainbow” world that turns out, in the end, to be neither Oz nor “home,” a world where ruby slippers are just another pair of shoes you purchase and put on display.


“There’s a sadness in the play,” Tolins said. “People are usually surprised by it, but they end up feeling more than they expected to feel. I think it’s because you genuinely feel these two people come together and then you sense their inability to maintain a relationship because of their distance in where they are in their lives, economically, and where they are in show business.”


Tolins raised his hands as if to say, “Wait a minute,” perhaps reconsidering what he had just said.


“I think we live in a time…and it’s something Chris Hayes writes about in his book, Twilight of the Elites…that we live in a time of ‘fractal inequality,’ where no matter where you are in the society you feel less than someone else. At the core of the play is this feeling that no matter how high you get on the mountaintop, it’s not enough, and something in ourselves, and something in our society, makes us feel like we’re never ‘there,’ or if we get there – who’s more successful than Barbra Streisand? – it’s not enough to make one happy all day long.”


Staying with the idea of the sadness that lurks in the wings of the play, Tolins added: “One of the key lines in the play, where some of that sadness comes from, is when she explains why she was with Jon Peters for so long,” referring to the hair stylist turned movie producer. “She says, ‘He knew what to do on Sundays.’ That’s a line I actually read in an interview Barbra did in the 70s. We all can relate to that, especially if you have kids. It’s a long day to fill. So, even the most successful entertainer on the planet still has a fear of how to fill the time on Sunday.”


As a writer, Tolins “imagined,” with the help of a lot of research, many of the incidents in the play, but the imagining has proven to be eerily accurate. Many people who know Streisand, who have visited “the basement” and have seen the play, have said to Tolins: “How did you know?” However, the question arises, do you have to be a Streisand aficionado to enjoy the play? Tolins suggests not: “Don’t worry,” he said, “you will enjoy this play, but if you are a Streisand fan there are Easter eggs all through it,” meaning little delights, Streisand tidbits, if you will, hidden in the text waiting to be found and savored. “It’s kind of like my Barbra ‘Wasteland,’” he explained, alluding to the T. S. Eliot poem. “The allusions are legion.”


Tolins noted that at the beginning of the play there’s a caveat, that the play is “all fiction.” That, of course, allowed him poetic license, so he didn’t dwell on “reality” per se, for, as he freely admits, the premise is “ridiculous,” so he focused on “whatever conjecture and empathy I had for this character. Barbra to me is this fun mix of a superstar and a woman who shops at Loehmann’s.”


But, again, this empathy can’t help but cycle back to what it is like to be born with one or perhaps two societal strikes against you, and to succeed yet, at the same time, carry with you certain moments that are etched into your soul.


Making reference to Orson Welles film Citizen Kane and the psychological centrality of the sled, the “Rosebud” of the character’s childhood, prompted Tolins to say: “In the context of the play it’s that hot water doll, the doll she didn’t get. That’s a true story, the hot water doll is something that comes from her own interviews. There’s also the famous line that her step-father told her she was too ugly to have ice cream.”


Too ugly to have ice cream.


It puts a different spin on Streisand’s signature song, “People.” We're children, needing other children / And yet letting a grown-up pride / Hide all the need inside / Acting more like children than children.