A crippled man, diminutive in size, falls victim to drink, drugs and various other vices and dies before he is forty. Not the stuff you would gravitate towards if you were considering creating a musical, unless you wished to have your audience leave the theater feeling worse than it did when it sat down. You also probably wouldn’t think of writing a musical about a wicked witch or a girl named Mimi dying of HIV or a mother suffering from bipolar disorder. You’d walk away from the projects…and you would be wrong.


My Paris, which recently opened at Long Wharf Theatre under the direction of Tony award-winner Kathleen Marshall, is the eye-filling, tuneful and touching story of the artist Henri de Toulouse-Lautrec as he leaves his aristocratic, sheltered, provincial home, enters the world of the demimonde of Paris in the late nineteenth century and creates art that will forever be associated with and define the era. 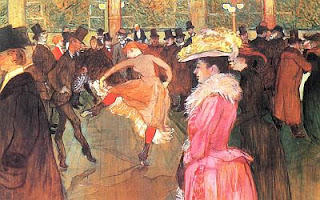 Although, as offers from stockbrokers and mutual funds often point out, prior returns on investments are no guarantee, My Paris has a pretty impressive pedigree. The music and lyrics are by Charles Aznavour (who, in a recorded message before the curtain, urges people to shut off their cell phones). His lyrics have been translated by Jason Robert Brown, who composed The Bridges of Madison County and The Last Five Years, and the book is by Alfred Uhry, he of Driving Miss Daisy fame. Not bad, but, again, no guarantee.


Not to worry. This talented group of musical theater folks has put together an evening that hits all the right notes, for My Paris has dance numbers that make the heart beat just a little bit faster, moving ballads that nudge the plot along, and ensemble set-pieces that justify the price of your ticket.
It doesn’t hurt that has assembled an absolutely stellar cast, many of whom were in the Norma Terris production of the musical. Leading as Lautrec is Bobby Steggert, who bears a striking resemblance to Daniel Radcliffe and gives a subtle, tender performance as the height-challenged artist in search of his artistic voice and, just perhaps, a woman who will love him. Supported by projection designs of Lautrec’s art by Olivia Sebesky, he captures the essence of artistic desires in “To Paint,” which has a flavor similar to that of Stephen Sondheim’s “Putting it Together,” though the rhyming, which relies mostly on single-syllable words, is somewhat less sophisticated. He is equally captivating in the “Bonjour, Suzanne” number, with witty choreography, also by Marshall, that utilizes benches to account for the decided height difference between Lautrec and his lady love, and he leaves the stage as he entered it, alone, with a haunting “The Windmill Turns,” which might remind some of the Jacques Brel song, “If You Go Away.”


Playing Suzanne, Lautrec’s love interest, is the enchanting Mara Davi. An accomplished actress blessed with a crystalline singing voice, she has the ability, “with just one look,” to convey a range of emotions. Her character’s bittersweet interaction with Lautrec is totally believable, no more so than in a “Dear John” number late in the second act, “What I Meant to Say,” when she must let down the artist as gently as possible.


Of equal merit is Jamie Jackson’s portrayal of an effete art instructor as well as the dissolute owner of an unsuccessful café that Lautrec will make famous via a series of posters, who leads the cast in a paean to a life of excess in the first act’s closing number, “Au Mirliton.” Adding much flavor to the evening are Lautrec’s three drinking buddies, Anquetin (Andrew Mueller), Rachou (Josh Grisetti) and Grenier (John Riddle), who, along with Lautrec, perform “We Drink!” – the lyrics, chorography and the spirit of the number owe a debt to Fiddler’s “To Life.”


With a four-piece orchestra of accomplished musicians set at the top of a three-tiered platform, framed by a suitably rococo backdrop, and lavish costumes by Paul Tazewell (“The Honor of the Family” number offers stunning costumes that span centuries – medieval to Belle Epoque), My Paris is both lush and evocative, yet there is a loneliness at its center that tugs at the heart, for Lautrec is a haunted man, and no matter the gaiety and hedonism that swirls about him, he bears the weight of a man who knows in his heart that he is doomed. The final scene, as he haltingly, painfully climbs stairs, brings us back to where we began: a man of extreme talent who is shackled by a body that constrains his spirit and his desires.