A Less Than Artful "Oliver" 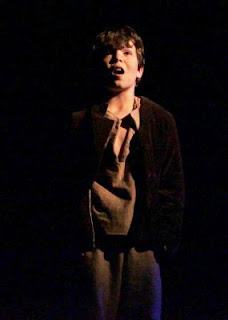 Tyler Felson as Oliver. Photo by Anne Hudson
On Broadway, sometimes it works and sometimes it doesn’t. Millions of dollars can be invested on a lavish, multi-set musical with a cast of apparent thousands, professionals all, only to have it come and go quicker than yesterday’s AOL headline story. If that’s true of Broadway, then it’s even more so for regional theater, where the budgets are smaller, the time to rehearse constrained and the talent pool somewhat limited. Thus, the decision to stage a major musical in such a theater is a roll of the dice: sometimes it works and sometimes it doesn’t.

The last time the Ivoryton Playhouse rolled the dice with “Hairspray,” it by and large worked, delivering a musical comedy with a lot of sass and period style. Unfortunately, Ivoryton picked up the dice again and this time, well, it’s not snake-eyes, but “Oliver” has major problems with pacing, blocking, choreography and, well, basic storytelling, as well as some over-the-top performances that would have made even Dickens, an author not averse to pulling all the emotional stops, blush. As erstwhile as the effort is, it comes off as being stitched together from random pieces: some conjoin, others disjoin.

The conjoining comes from several sources. Michael Cartwright as Mr. Bumble and Maureen Pollard as his inamorata, the Widow Corney, are pleasingly hypocritical – their “I Shall Scream” is quite delightful – and Kimberly Morgan’s is almost always endearing, although a less-then-London accent sneaks out occasionally. It is Neal Mayer, as Fagin, who consistently keeps the show above water. His oleaginous Fagin is sly, conniving and yet, beneath it all, quite lovable, and his “Reviewing the Situation” is the high point of the evening.

One of the primary challenges of staging “Oliver” is that, to a certain extent, it is child-actor driven. After all, there’s Oliver himself (Tyler Felson) and the Artful Dodger (Nathan J. Russo), as well as all of the boys in the orphanage who reappear as pickpockets under the guidance of Fagin. On Broadway or in , these roles would be filled by boys who turned pro in the womb. In Ivoryton, local talent, by and large, has been drawn upon, and although the lads give us some good moments – Felson is cherubic and a quite capable actor, Russo has some “artful” bits and Fagin’s gang shines in “I’d do Anything” -- they simply aren’t disciplined enough to sell their numbers. Okay, at this point most of you are saying, “Wait a minute, these are kids. Matter of fact, one of them’s my son! Give them some slack!”

Slack I would give them if this was a middle or high school production. As a matter of fact, I would stand and applaud them, but this is professional theater, and all of the plucking at sleeves, wandering eyes, awkward movements, bumping into each other and being a half-beat off affects the overall quality of the show. Even their curtain call appearance is a bit disorganized. However, it’s not all their fault, if fault is the right word, because I do not wish to fault any young person who has the courage and self-confidence to get up on a stage and perform. Many an adult would shy from the challenge.

Director R. Bruce Connelly and choreographer Kelly Shook seem to have lost sight of the fact that every number in a musical, be it a solo, a duet, or an ensemble piece, must be both visually and musically satisfying. The musicality of many of the numbers in Ivoryton’s “Oliver,” although supported by a somewhat limp sounding orchestra sequestered in the Green Room, is pleasing, but the “pictures” are anything but – there are simply bodies in position or in motion with no nod towards aesthetics. Thus, the audience’s eye doesn’t know where to focus, or doesn’t care to focus. This is brought home by the fact that the opening number of the second act, “Oom Pah Pah,” works on all levels, including the visual. You want more of this, but it just isn’t in the offing.

“Oliver” is, on one level, pure, naked melodrama – Dickens knew how to make his readers grab for their hankies -- and as such, care must be taken that actors don’t over-caricaturize the characters Dickens created as caricatures. In this production, some actors skate on very thin ice and others simply crash through into the murky deep. Sam Schrader as the obsequious Noah Claypole teeters but saves himself, and T. J. Mannix as Bill Sykes, the man everyone loves to hate, is the epitome of danger and brute force without ever getting close to the “Do Not Skate” area. However, Robert Boardman and Tara Michelle Gesling, playing the undertaker, Mr. Sowerberry, and his wife, apparently don’t see the sign or simply disregard it – in scenes together the eat up the scenery with abandon, something that director Connelly apparently approves of, since he gives them one more shot at it in the curtain call.

All in all, Ivoryton’s “Oliver” is a pleasant enough way to while away several hours of a summer’s evening. It’s not the best the venerable theater has offered its audiences, but if you are of a forgiving nature, you should enjoy yourself.

“Oliver” runs through Sept. 2. For tickets or more information call 860-767-7318 or go to www.ivorytonplayhouse.org.
For CT Theater News and Reviews.
Posted by Geary Danihy at 2:53 PM