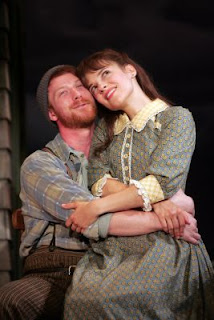 Jeff Kready and Jenn Gambatese. Photo by Diane Sobolewski
There’s a telling bit of blocking in the first scene of the second act of “Carousel,” which recently opened at Goodspeed Opera House. It’s in the “Real Nice Clambake” number, and director Rob Ruggiero has the cast spread out across the stage in post-prandial lethargy. What’s significant is that sitting upright, stage center, are Nettie and Mr. Snow, and in the center of them, the focus of attention in this set-piece, is Carrie Pipperidge, while Julie and her husband, Billy Bigelow, the ostensible principals, are extreme stage right in a supine position – you actually have to hunt for them.

Why, you may ask, are Julie and Billy in such a secondary position in the scene? The answer is quite simple: Carrie is played by the marvelously talented Jenn Gambatese who, surrounded by an extremely strong cast, still steals the show. James Snyder and Teal Wicks. Photo by Diane Sobolewski
Yes, we tend to the story of Julie (Teal Wicks) and Billy (James Snyder) as they fall in love, marry, only to have it all end in tragedy, with Billy redeeming himself on his one-day trip back to earth, but any time Gambatese, who several years ago won the Connecticut Critics Circle award for best actress in a musical for her portrayal of Annie Oakley in “Annie Get Your Gun,” is on stage she commands attention with her strong voice, deft acting ability and great comedic timing (plus a lovely, emotive face and evocative body language).

Early in the first act a thought arose that she should be playing the part of Julie, but no, she has been wisely cast as Julie’s best friend and the musical is all the better for it.

And what a musical. Sometimes you can tell from the opening moments of a production whether it is going to soar or crash, and Ruggiero, along with scenic designer Michael Schweikardt and chorographer Parker Esse, have put together a “Prologue” that simply dazzles. Given the Opera House’s diminutive stage, you can’t expect to see an entire carousel up there and you don’t, but the trio has placed trust in the audience’s imagination, and it works.

Before the lights come up, sound designer Jay Hilton gives us what sounds like rockers creaking on a wooden porch and you ask yourself, what the hell is that? Well, it’s a group of young women arranged in tableau working in synchronized movements at imaginary looms – it’s a beautiful, engaging image that dissolves as the workday ends and the girls travels to an amusement park where Billy mans the carousel, which is represented first by whirling silhouettes of the horses, then a single horse designed by Brent White, and then, flats are turned and there are four young woman riding imaginary horses – they slowly spin as the single real horse rises and falls, all to the tuneful music of Richard Rodgers “Prologue.” It’s magical, and lets the audience know that its members are in very capable hands, and those hands never, not for a moment, miss a beat throughout the entire evening. The artistry is such that, for someone who has seen this musical on Broadway, in regional theater, and in , it was surprisingly fresh and new and, in the final scene so touching that jaded eyes were a bit misty.

As already mentioned, the fact that Gambatese steals the show is a minor miracle given the strength of the rest of the cast. Wicks (who will be replaced in the role on Aug. 8 by Erin Davie – Wicks is moving on to a national tour of “Jekyll & Hyde”) is a strong-willed yet innocent Julie who interacts extremely well with Snyder – their opening number, “If I Loved You,” is as poignant as you can ask for, and a wonderful confirmation of how Rodgers and Oscar Hammerstein II, who wrote the book and lyrics, revolutionized American musical theater. It is a marvelous merger of song and dialogue that establishes character, creates conflict and satisfies on multiple levels.

Snyder is a commanding figure on the stage, playing the Bigelow role with just the right blend of bravado, injured male pride and underlying insecurity, and his signature number, the “Soliloquy,” is staged by Ruggiero to heighten Snyder’s physical presence – during the final moments of the song, which Snyder delivers very effectively as part dialogue and part sung cri de coeur, Ruggiero has Snyder stride forward onto a small thrust stage. As he does so, lighting designer John Lasiter back-lights the actor. The overall effect is gripping – Billy Bigelow, swearing that he will find some way to earn money in a big voice that reaches to the farthest corners of the theater, looms over the audience as an aching, impassioned presence. 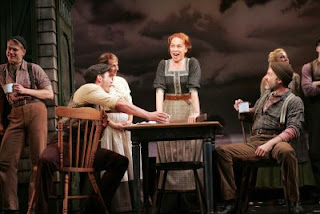 Anne Kanengeiser and the cast of "Carousel." Photo by Diane Sobolewski
And there are other stand-out performances. Deanne Lorette, as Mrs. Mullin, the owner of the carousel, is the woman of a certain age who is smitten by Billy, and she creates a sensitive portrait of a woman trying to hold onto her man and her dignity. Equally impressive is Anne Kanengeiser as Nettie, the boardinghouse lady who comforts Julie by telling her she will “Never Walk Alone.” Then there’s the villain of the piece, Jigger Craigin (note how “hard” the name sounds – amazing what a little alliteration can convey), portrayed by Tally Sessions. Sessions takes a one-dimensional character and turns him into a multi-faceted rogue who gives us a lively “Stonecutters” and, acting in concert with Gambatese (yes, there she is again), provides a set-piece that is the comic high-point of the evening. 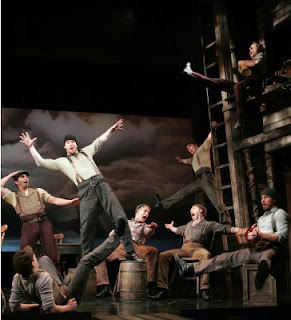 Finally, there’s Eloise Kropp as Louise, Julie and Billy’s daughter. She gives us the requisite angry, head-strong fifteen-year-old, but in the “Ballet” sequence, loosely based on the original Agnes de Mille choreography, we see character and emotions translated into movement, with the help of Sam Rogers, who plays the dream-sequence barker. I’ve never been a big fan of the ballet sequence in “Carousel,” but, perhaps given the tight quarters, there’s an energy here that I’ve never seen before. Heretofore I’ve sat through the sequence; this time, I lived through it.

All in all, this is perhaps one of the strongest, most cohesive…and thoroughly entertaining productions I’ve seen at Goodspeed, which always sets the bar high. In this case, the bar is very high, and everyone involved leaps over it with ease. If you only have time to see one show this summer in , go see “Carousel.” You won’t regret it.

For Ct Theater News and Reviews. To see what other critics have to say about this show go to www.ctcritics.org
Posted by Geary Danihy at 7:42 AM