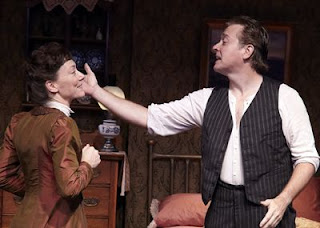 
Can lightening strike thrice? Well, in the case of Andrea Maulella in the role of the very aptly named Adelaide Pinchin, yes it can. Several years ago, Maulella won a Connecticut Critics Circle award for her portrayal of the spinster shop girl who is wooed and won by a con man in the Westport Country Playhouse production of “Tryst,” which also starred Mark Shanahan as the roué who wins ’s heart. The two reprised their roles Off-Broadway in an Irish Repertory Theatre production under the direction of Joe Brancato, and now they are back, again under Brancato’s direction, this time at TheatreWorks in . The play, by Karoline Leach, is still stunning, and the acting…well, practice makes perfect. It is, quite simply, two hours of gripping theater.

The play takes place in Edwardian England, and Michael Schweikardt’s set deftly evokes both the “Jack the Ripper” grim, ill-lit streets of of the time and the somewhat threadbare hotel room the couple ends up in on their wedding night. The opening sequences, played against flats depicting London by-ways, moodily lit by Martin Vreeland, is a pas de deux deftly staged by Brancato that has the characters establishing themselves as they stride and whirl about the stage, their movements hinting at their eventual meeting and the physical tension that meeting will evoke. 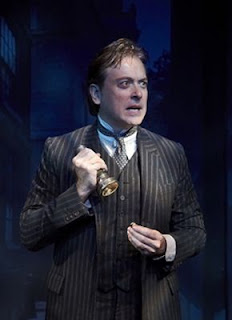 Shanahan plays George Love, an amoral man who lives off the funds he can purloin from ladies he charms into marrying him. He weds them, beds them (to their great satisfaction, he claims), then absconds with their funds, which never last him long. As the play begins, Love is on the lookout for his next victim and he soon catches sight of Pinchin, who is placing a hat in the window of the shop where she works in the back room. She has all the attributes Love is looking for: she is plain, obviously lonely, with just a touch of style that hints at a reserve of cash. He proceeds to court her and, by the end of the first act, marries her and takes her away for their wedding night, the last night she will see him.

However, all is not as it seems, for these two characters are not mere cardboard cutouts, and it is the primary strength of Leach’s writing and Brancato’s direction that what seems at first to be a simple boy cons girl story turns out to be a study in repressed desires and egos conflicted, and tortured, by parental abuse and neglect. As the two characters reluctantly reveal what has made them the way they are, they are drawn towards each other. Love begins to have second thoughts, and Pinchin slowly gains strength and belief in herself as a person of worth. The stormy, revelatory second act draws towards a hopeful conclusion as the odd couple conjures possible salvation, a merging of lost souls. In the final moments, as Love pours water into a tin tub so his wife can take a bath, there is a glimmer of light, a possibility that scorpions can repress their urge to strike, leopards can, in fact, change their spots, and wallflowers can actually blossom.

Shanahan gives us a Love who seems to be sly and implacable, a force of nature who takes what he wants and lets the Devil take the hindmost. However, there’s a back-story, a reason why his character is the way he is, and Shanahan, with emotive eyes and a strong physical presence, slowly reveals the tortured soul that lies beneath the conniving surface of his character. It’s a strong performance, but a performance that is inevitably overshadowed by Maulella’s, for she presents us with such a multi-faceted picture of a tormented woman that, at times, you ache to rise out of your seat, descend to the stage and just hold her in your arms and comfort her. 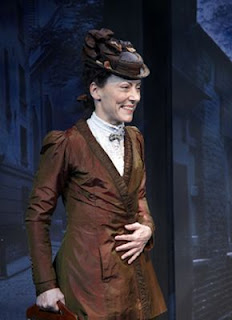 Perhaps under Bracato’s direction, Maulella’s has become more physical since her appearance on the Country Playhouse stage, more visceral, or physically self-abusive. From the opening scenes, Maulella establishes a body language that hints at the abuse her character will eventually reveal…the language is at first subtle, then less so as she strikes her temple or grips her abdomen. Her agony, her need, and her strength are now more apparent, and it all adds up to a stunning portrayal of a woman who is on the edge, rolling the dice, making a bid for freedom, fragile in the extreme yet determined. It’s a bravura performance from an actress who, in her portrayal of Anne Sullivan in “The Miracle Worker” out at the Ivoryton Playhouse (another very physical role), brought tears to my eyes.