Barefoot in the Park -- Sharon Playhouse -- Through August 12 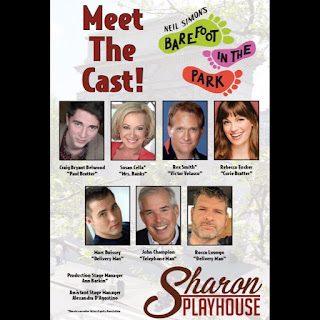 If you’ve been around for 55 years you’re bound to look and sound a bit different than when you first saw the light of day. Once you were cute and cuddly but now, well, it all depends. Such is the case with Neil Simon’s “Barefoot in the Park,” the current production at the Sharon Playhouse. On Broadway, it ran for 1,530 performances and was Simon’s biggest hit, and it didn’t hurt that a young Robert Redford played one of the leads. The Sharon production, directed by Clayton Phillips, is professional and, at moments, quite engaging, but the play itself, despite the outstanding cast, is no longer cute and cuddly. There’s some joint creaking and wrinkles in the show and what might have drawn uproarious laughter five-plus decades ago now often elicits little more than a wan smile.
The premise is sitcom simple: a young couple, Corrie (Rebecca Tucker) and Paul (Craig Bryant Belwood) has just moved into a Manhattan apartment. The only problem is, it’s five (or six, if you count the stoop) flights up, a fact that provides one of the play’s running jokes: to climb the stairs is exhausting -- funny the first time it’s used as the telephone man (John Champion) staggers in, but it does become a bit old. Corrie is a free spirit, or at least as free a spirit as Simon could conceive of in the early 60s, while Paul, a lawyer, is buttoned-down. And…well…the play is about this young couple, over the course of several days, learning to adjust to each other’s personalities and quirks as they are visited by Corrie’s mother, Mrs. Banks (Susan Cella) and a flamboyant neighbor, Victor Velasco (Rex Smith).


The problem, not with the production but with the aging play, is that a lot has transpired in the past five or so decades and the problems, such as they are, that this young couple face seem, viewed with eyes that have seen everything from the sexual revolution to #MeToo, somewhat superficial.
That being said, there’s no faulting the cast, which does everything it can to bring life to this old comedic war horse. First there’s Tucker, who doesn’t stop moving throughout the entire evening – she’s a visual definition of effervescence. She prances, she pouts, she, at moments, plays the sex kitten and does a great job when the script calls for Corrie to be just a bit tipsy. Playing against her, Belwood is sufficiently upright and handles his character’s befuddlement at some of the goings-on with nuance and understatement. The two work well together, no more so than in the extended argument scene, when the rational gives way to the irrational. If there’s any part of Simon’s play that is timeless it is this, for I would suggest that the rise, crescendo and falling off of a couple’s argument style, complete with door-slamming, hasn’t changed over the decades, and Tucker and Belwood get it just right. It’s the high point of the evening.


Then there’s Cella as Mrs. Rose, a role that has become somewhat stereotypical, that of the intrusive mother-in-law (think Endora in “Bewitched”). However, Cella doesn’t settle for the stereotype, but creates a fully-fleshed lady of a certain age with style, flair and a great sense of timing. Her best moments are with Smith as the aged lothario Velasco. Her she uses controlled body language to convey her character’s hesitancy about associating with this man. Finally, Smith must tackle an essentially one-dimensional role, one that might tempt an actor to “ham it up.” Smith refrains from doing this, occasionally allowing the audience to see his character’s insecurity behind the façade of bravado.
Most of the play’s first act is sustained by the running joke and what seems like an extended amount of exposition not only to establish the characters but to drive home the situation. In essence, beyond the stair-climbing, not much really happens, a point that was reinforced by the audience’s reaction when the lights came up for the intermission – no one moved. More was expected. In fact, the ushers had to announce that it was, in fact, an intermission.

There have been tectonic societal changes since Simon’s play premiered in 1963, and those changes can’t help but affect the audience’s response to the play. Back then there may well have been unbridled, continuous laughter but the Playhouse audience was often silent, save for one man who found just about every line hilarious – his barking laugh became just a bit annoying. As the first act somewhat tediously crawled towards the intermission I glanced at those sitting around me – they often looked like they were watching an Ibsen play about marital strife – intent yet somehow expecting more than what Simon has given them.