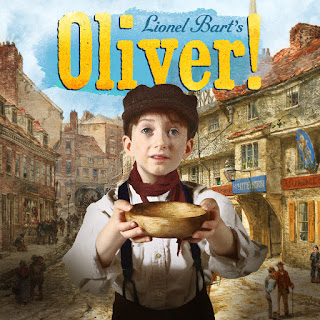 The initial moments of “Oliver!,” the Lionel Bart musical that recently opened at Goodpeed to a packed house, offer thunder, lightning and deep shadows, all of which evokes the 1948 David Lean film of the Dicken’s novel, made memorable by Guy Green’s atmospheric cinematography. However, Lean, in filming the novel, had the freedom to move from location to location and to redecorate sets as called for. Rob Ruggiero, the musical’s director, has less freedom given the restraints placed on him and scenic designer Michael Schweikardt by the confines of the Goodspeed stage. Hence, there’s a certain static quality to this production, for although props – primarily tables, chairs and lines of clothing, or, rather, nose wipes – appear and disappear, the basic scene never really changes, creating a feeling that this is more a revue featuring a lot of familiar numbers than a fully realized production of the musical.


Schweikardt’s set, with its metal stairways, pillars and balustrade that defines a raised walkway, must suffice for multiple locations. It works for the grim orphanage scene, with the children marching despondently to “Food, Glorious Food,” and Mr. Bumble (Richard R. Henry) upbraiding Oliver for having the audacity to ask for more food, but less so in many following scenes, for the set hovers over the entire production like a dark, oppressive presence.


Accepting this, as a revue, “Oliver!” has many enjoyable moments, for the cast works hard to evoke the atmosphere the set impedes. You simply couldn’t ask for a better Fagin than that created by Donald Corrin. He has several signature songs and he delivers on each one, from “You’ve Got to Pick a Pocket or Two” to the delightful “Be Back Soon” and his character’s analysis of what life’s options offer him in “Reviewing the Situation.” He ably conveys the idea that though his character is a thief and scoundrel, there’s still a glimmer of humanity within him.


Equally effective is EJ Zimmerman as Nancy, tavern slattern and the girlfriend of the supremely villainous Bill Sikes (an impressively menacing Brandon Andrus -- he was so effective as the villain that his curtain call evoked several “Boos,” a sure sign that he had done his job as an actor). Zimmerman’s character also has some signature songs and she handles these with ease. There’s the rousing “Oom-Pah-Pah,” which opens the second act, and the heartfelt “As Long as He Needs Me,” which the audience responded to with unbridled approval. She’s a pert, believable Nancy, and her character’s death at the hands of Sikes is still shocking.


Given that “Oliver!” is primarily about children being used for criminal purposes, there are quite a few child actors on the stage, chief among them Elijah Rayman as Oliver and Gavin Swartz as the Artful Dodger. Rayman has a certain angelic quality to him that emphasizes his character is a bright light in an otherwise dark world, a world that Swartz’s character is familiar with, though one might ask him to be just a bit more “artful.”


In many past Goodspeed productions (several directed by Ruggiero), ensemble numbers often overcame the stage’s confines, but in the case of “Oliver!,” even though Ruggiero utilizes the aisles and balcony, “Consider Yourself” and “Who Will Buy?” seem oddly restrained. You want them to go one step further, to break through the visual confines and overwhelm you. That, for at least one audience member, simply didn’t happen.


Familiar as I am with the Dicken’s novel and with its various iterations in film and on the stage, it’s difficult to imagine the response of those who come fresh to the Goodspeed production. I filled in the blanks and had certain expectations for characters before they ever appeared, and much of my response was whether or not they fulfilled those expectations. I knew what I wanted Fagin, Nancy and Bill Sikes to do, and they, by and large, succeeded. Thus, I was, to a certain extent, seeing a different show than those who had never seen “Oliver!” before. In retrospect, I would have liked to set up a table outside with a little sign that said “What did you think?” Alas, all I could do was listen to the off-hand comments of the audience members as we all filed out of the theater, comments that seemed essentially positive, especially with regards to Corren’s and Zimmerman’s performances.


It all, in the end, comes down to opinion, which is influenced to a certain extent by familiarity. If you’ve tasted 10 different vanilla ice creams then your opinion of the eleventh will be different than that of the person who experiences her first scoop. Her response may justifiably be, “That was divine,” while someone with a more experienced (some might say “jaded”) palate might say, “Not bad.” In the case of “Oliver!,” the response can run the gamut.


“Oliver!” has been extended and will run through September 13. For tickets or more information call 860.873.8668 or visit: www.goodspeed.org.