If One Door Slams...

A Flea in Her Ear -- Westport Country Playhouse -- Thru July 28 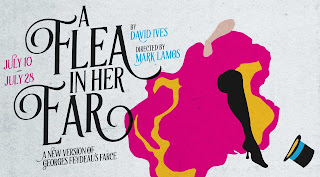 Sometimes we enjoy a book, play or movie simply because it epitomizes a genre. It may not be a great work of art but if we’re in the mood for a Rom-com, bromance or a detective story and the work follows the rules and delivers the goods, then we may not be ecstatic but we are satisfied. Such is the case with “A Flea in Her Ear,” which recently opened at Westport Country Playhouse. If you’re in the mood for farce, then this offering will satisfy. Based on Georges Feydeau’s 1907 highly successful play, adapted by David Ives and directed with brio by Mark Lamos, “Flea” has the requisite slamming doors and mistaken identities that are the bread and butter of farce, whose appeal is primarily visual and sensual, with a heavy emphasis on physical activity.
It may take you a while to settle in for this three-act play as you figure out who the characters are and their relationships. In essence, we have Raymonde (Elizabeth Heflin), wife of Victor (Lee E. Ernst), who believes, because of her husband’s recent lack of ardor, that he is being unfaithful. Her friend, Lucienne (Antoinette Robinson) suggests a ploy: they will write a letter to Victor from an admiring, anonymous lady, inviting him to a tryst at the Frisky Puss, a hotel that caters to assignations. There, Raymonde will confront him.
Receiving the letter, Victor, although initially proud that he has drawn the amorous attentions of a lady, finally decides that the letter is meant for his friend, Romain Tournel (Stephen Pelinski) and suggests that Tournel go to the hotel. Others also, for various reasons, head for the hotel: Camille (Mic Matarrese) for a rendezvous with Victor’s household cook, Antoinette (Carine Montbertrand), and Carlos (Michael Gotch), Lucienne’s husband, who suspects his wife of infidelity and is eager to take revenge. Off they all go, and so ends the first act.
The second act again requires a bit of settling in. It is set at the hotel, where new characters are introduced. As those intent on trysting also arrive, chaos ensues, with a lot of slamming doors, partial disrobing and a revolving bed. Characters appear and disappear as they attempt to hide from each other. The third act finds everyone back at Victor’s house, where all is finally resolved.
The cast of “A Flea” is, across the board, excellent, but there are a few standouts First is Matarrese as Camille, for his character has a defective palate that prohibits him from pronouncing consonants. Thus, most of his dialogue must be delivered sounding like quasi-gibberish. It’s a tour de force that immediately delights the audience; when he’s on stage he effectively steals the show and engenders the greatest laughter. Then there’s Ernst as Victor, who is also charged with playing Poche, a bell boy at the hotel who bears a striking resemblance to Victor. This requires not only some rapid costume changes but also portraying a pompous Parisian gentleman as well as a somewhat inebriated servant. He pulls this off with such success that at the curtain call you half expect to see Ernst and his doppelganger taking bows.
Finally, there’s Gotch as Carlos, the excitable, gun-toting Spaniard. As directed by Lamos, Gotch gives us an acting style that went out of date almost a century ago…but works…for his every statement and move is over-the-top, as is his difficulty with the English language. He is delightfully outrageous as a preening Spanish grandee consumed by jealousy. One can only imagine Gotch’s eagerness in being given free rein to emote, and admire his skill, for one of the most difficult things to pull off on the stage is portraying a bad actor…without giving a bad performance.
Given that the play is in three acts, with two intermissions, the farce can seem a bit overwhelming at times, especially in the second act, when the audience is seldom given a moment to catch its collective breath. Event tumbles onto event in kaleidoscopic fashion, so much so that you often do not have the leisure to comprehend what has just happened before a new twist is thrown in. Here you just have to go with the chaotic flow and enjoy the extended display of the essence of farce.
Is “A Flea” brilliant theater? No, but it is what it is, and if you accept the conventions of farce then there are moments in which you can revel. Yes, the plot is highly contrived, the characters somewhat larger-than-life and the acting primarily geared to broad strokes rather than pointillist subtleties, but we go to the theater for many different reasons, and one of them is to just sit back and be entertained, and there are many entertaining moments in this broad comedy set in the Paris of the La Belle Epoque.
“A Flea in Her Ear” runs through July 28. For tickets or more information call 203-227-4177 or go to www.westportplayhouse.org.
Posted by Geary Danihy at 10:44 AM