Grease -- The Ivoryton Playhouse -- Thru July 29 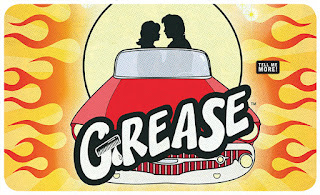 
For its two-musical summer fare, the Ivoryton Playhouse is first offering the teen classic, “Grease,” and although there are some minor problems, the overall production is basically bursting with hormones and testosterone…and it’s just a lot of (some might say mindless) fun. Then, again, there are some who don’t like hot fudge sundaes (more’s the pity)


The production, directed and choreographed by Todd Underwood, with book, music and lyrics by Jim Jacobs and Warren Casey, is a lighthearted look at teenage angst and high school culture in the late 50s at the fictional Rydell High School, where virginal Sandy (a delightful Kimberley Immanuel) runs into the greaser, Danny Zuko (Johnny Newcomb), a boy with whom she had an innocent summer fling, although their memories of their idyllic time together are dictated by whom they are talking to (“Summer Nights”).


Even back then there were cliques, and Sandy is drawn into the Pink Ladies, a group of young ladies feigning cool and teen savoir faire led by Rizzo (Alyssa V. Gomez). The male counterpart is the “greaser” group known as the Burger Palace Boys, which includes Danny and Kenickie (Natale Pirrotta). The girls play at seduction while the boys preen and feign indifference when they’re not fixated on their cars or trying to figure out the intricacies and pitfalls of sexuality. This sounds like heavy stuff but, of course, it’s all sub-text to the musical, which features numbers that have become iconic. Hence, there are many in the audience (which at a Saturday matinee embraced all age groups from kiddies to codgers) who have the songs’ lyrics (and their delivery – mostly from the 1978 film) etched into their minds. This often leads to comparisons and, by and large, the energetic cast and its leads deliver the goods.


First of all, how do the leads handle their signature songs? Well, you couldn’t ask for a better take on Sandy’s “Hopelessly Devoted” – Immanuel owns the stage here as her voice soars, and her second-act transformation into “sexy Sandy” – “You’re the One That I Want” -- is sufficient to ramp up the testosterone level. Then there’s Gomez’s “Look at Me, I’m Sandra Dee” – it’s smart and sassy -- and then her rendition of “There are Worse Things I Could Do,” which, if problematically blocked, is dead-on.


Newcomb does a credible job with “Sandy,” although his portrayal of the conflicted Danny (Should I be the nice guy I really am or the smartass Greaser?) might call for a bit more “greasiness,” especially in the drive-in movie scene where Sandy leaves in a huff. He really doesn’t make any overt moves – it appears he just wants to cuddle -- so the motivation for her response is lacking (a little more awkward groping might be in order here).


The ensemble numbers – especially “Born to Hand Jive” and “Those Magic Changes” – are exuberant. The only problem is, well, there might be just a few too many people in the ensemble. Scenic designer Daniel Nischan has provided an up-stage, elevated platform to allow for the overflow but, even still, the stage during the ensemble numbers sometimes seems overly crowded, and those actors blocked extreme stage left and right seem to fall off into darkness.


Some special shout-outs, first for Audrey Wilson as Jan. It could easily be a throw-away role, but she creates a Jan that most guys would like to have a Coke with. She gives the character a presence that goes beyond the script, turning what might be seen as a flat character (i.e., one-dimensional) into someone you attend to…and like.


Then there’s Andee Buccheri, a member of the ensemble. She has no solos, has no lines (as far as I can remember) but when she’s on stage, your eye is drawn to her, not because she’s doing any up-staging, but she just projects a certain electricity that can’t be taught or manufactured. Last seen at Ivoryton in “Biloxi Blues” and at Playhouse at Park in “A Chorus Line,” hopefully she will catch the eye of more regional casting directors so that her apparent innate talent can be enjoyed by multiple audiences.


As summer fare, “Grease” at Ivoryton is a crowd-pleaser and it is sure to draw a multi-generational audience as grandparents bring grandchildren to the theater to have them share in a musical that captures the late 50s, became a phenomenon in the late 70’s, and still works as a delightful piece of musical theater – in other words, it spans generations. The final number, “We Go Together,” captures the allure of the musical – “We go together / Like rama lama lama ka dinga da dinga dong / Remembered forever…That's the way it should be, wha oooh, yeah.” Even though it might not be true…time does bring about changes…it’s nice to think that “We go together” and we will remember “forever” the moments that defined us. That’s the way it should be.