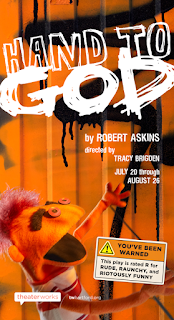 You’re probably familiar with the idea of someone having an evil twin, that part of a person’s personality, mostly repressed, that fantasizes about being gauche, irreverent and causing general mayhem just for the hell of it. Well, what if that twin was attached to your hand in the form of a puppet named Tyrone, a foul-speaking, lubricious creature (think of a Muppet gone very bad) that often controls what you do and say? That’s one of the premises of Robert Askins play, “Hand to God,” which recently opened at TheaterWorks in Hartford. The Tony-nominated play that first appeared on Broadway in 2015 and currently under the direction of Tracy Brigden, is really an exercise in “acting out,” loosely defined as problematic behavior that is physically and verbally aggressive and often destructive of property (all of which is in the play). As such, one would think that the play would seek to reveal the reasons for such behavior and offer to resolve them in some way. Whether it does so or not remains to be seen.


The set-up is that Margery (Lisa Velten Smith) is trying to coordinate a puppet show for Pastor Greg (Peter Benson) for an upcoming church service. To accomplish this she has enlisted her son, Jason (Nick LaMedica) as well as Jessica (Maggie Carr) and a somewhat rebellious Timmy (Miles G. Jackson). The play opens, after a somewhat disjointed, pseudo-philosophical monologue by the puppet, Tyrone, with a haphazard rehearsal in the church’s basement that quickly reveals that Jason is under the control of (possessed by?) his puppet. However, sexual tension is also rife. The good pastor has the hots for Margery, whose husband, an apparently less-than-fulfilling spouse, died of a heart attack six months ago. But Timmy also lusts after Margery, and her son may have some strong Oedipal problems. Then there’s Margery herself, rife with sexual frustration. The only character who seems relatively uninflamed by libido is Jessica.


As the play unfolds, is any of it believable? Well, it all depends on whether or not you can suspend your disbelief. What is definitely believable is that Jason is using Tyrone to say (and do) aggressive, assaultive things that the mild-mannered young man would normally shy away from. Whatever part of this “acting out” you buy is much to the credit of LaMedica, who in lightning-bolt fashion switches back and forth from dutiful son to semi-sociopath. It’s an amazing performance, given that he has to convey two different personalities – introvert and extreme, foul-mouthed extrovert – all while manipulating the puppet on his hand, which he does with a great deal of dexterity.


The believability factor becomes a bit strained when we come to Margery – Jessica Rabbit’s “I’m not bad, I’m just drawn that way” comes to mind. Well, Velten Smith is a good actress (she’s reprising the role she played at City Theatre in Pittsburgh) asked to play an over-the top character – “She’s just written that way.” Margery has several screws loose, but we’re never really sure why, and she has her own way of acting out sans puppet – she is prone to tirades, hissy fits and what might be called revenge sex. Her character’s underlying motives seem somewhat hidden. We’re not talking Chekhov here.


Benson, as Pastor Greg, is not given much to work with by Askins, but he uses what he’s given to bring to life the somewhat self-effacing pastor, and Carr has even less “meat” in her character, Jessica, though she does pull off a rather funny (if over-long) puppet-sex scene (it’s a been-there-done-that moment for anyone who’s seen “Avenue Q”). Jackson, as Timmy, is all false bravado and ruled by tumescence. Do you buy the scenes between Velten Smith’s character and Jackson’s that lead to multiple trysts? To do so we’d have to understand a bit more about Margery and her back-story, something Askins alludes to but never really deals with. Why the rage; why the lust; what’s her problem? Is Timmy really that sexually desirable (doesn’t seem so – he’s just a punk kid looking to get laid).


To embrace “Hand to God,” it might be useful to conceive of the entire evening as allegorical, with the characters manifesting aspects of their psyches, interacting on a stage that is dictated by the subconscious. Otherwise, the events in the play, as they devolve to a certain amount of violence, including self-mutilation, challenge credibility. This allegorical take is reinforced by the play’s closing moments, which has Tyrone appear in a video (compliments of Luke Cantarella, who also designed the very functional set) to suggest that we, as human beings, might be better off if we shed the puppets we use to present ourselves to the world (and protect our fragile egos) and simply be the frail, flawed humans we really are.